When cranes, man-lifts, earthmovers and other hydraulic equipment have problems with hoses, a PIRTEK mobile service vehicle can show up onsite quickly. 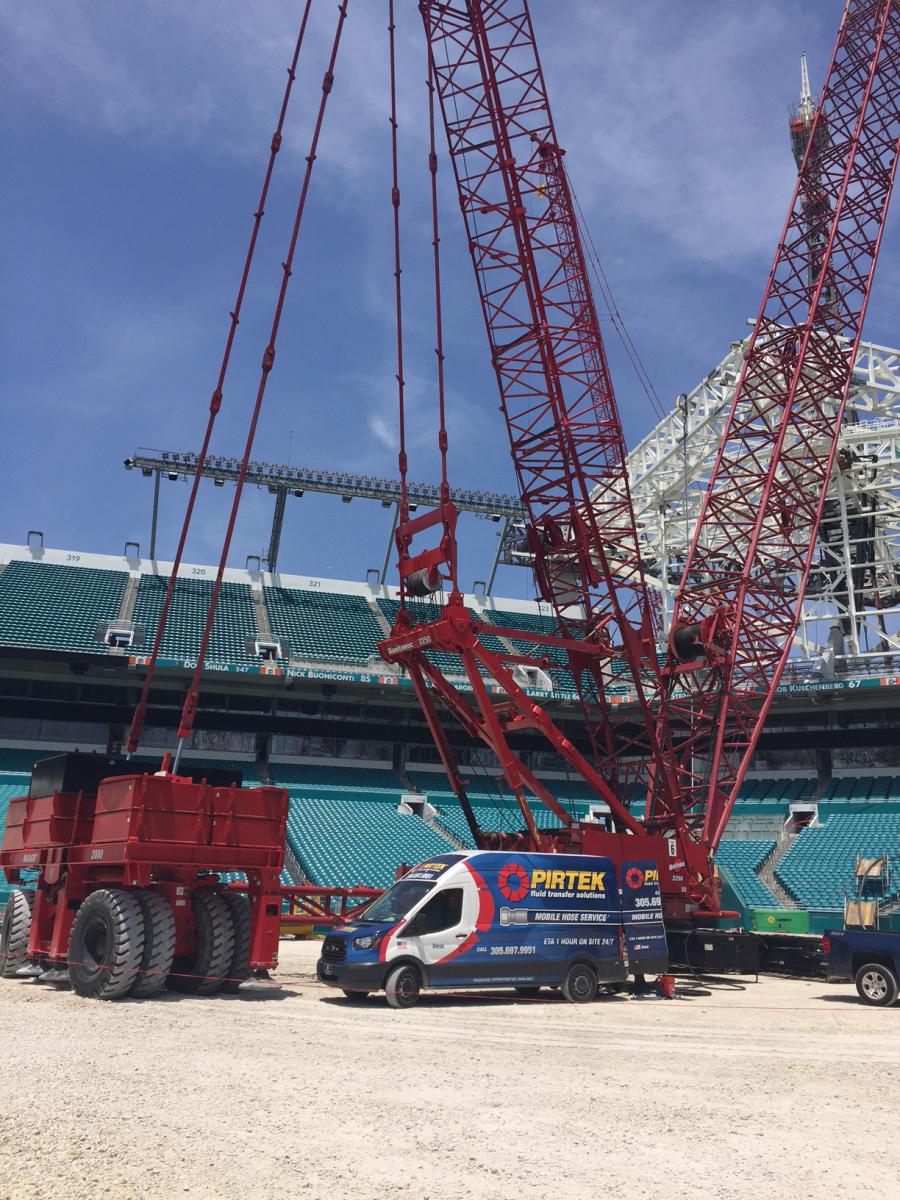 When cranes, man-lifts, earthmovers and other hydraulic equipment have problems with hoses, a PIRTEK mobile service vehicle can show up onsite quickly to provide the desperately needed maintenance — on the spot.

The construction and renovation of sports stadiums is big business these days. It also entails big pressures: Any construction downtime can jeopardize prospects of hitting the deadline in time for opening day.

That's where PIRTEK plays a critical role. When cranes, man-lifts, earthmovers and other hydraulic equipment have problems with hoses, a PIRTEK mobile service vehicle can show up onsite quickly to provide the desperately needed maintenance — on the spot.

That timeliness has made PIRTEK a valuable commodity in the Atlanta areas, a hub of stadium-building in recent years.

“You're talking about hundreds of pieces of equipment around the Braves' stadium and the Falcons' stadium,” said Mike McCarthy, owner of PIRTEK Norcross in Norcross, Ga., and PIRTEK Dobbins in Marietta, Ga. “We're the go-to guys for hydraulic leaks on that equipment. It doesn't matter where the machine is, they can call PIRTEK and we can do it right away.”

PIRTEK is the only franchise of its kind in the United States, providing hydraulic and industrial hose replacement sales and services, according to the company. There are 58 PIRTEK service and supply centers and a fleet of mobile service vehicles throughout the United States. Globally, PIRTEK has more than 400 locations and 2,000 mobile service vehicles in 23 countries around the world.

“We provide a one-hour ETA in metro Atlanta that our customers have come to depend on,” McCarthy said. “One big thing that sets us apart is that we go the whole distance: getting the hose off, fitting it, putting it back on to get the equipment up and running again. Some of our competitors will customize a hose, but they won't install it. We're a turnkey operation —we get in pretty deep.”

Both Atlanta-area stadiums are set for completion in 2017. Mercedes Benz Stadium will be hosting the Super Bowl in 2019. As the builders inch toward those deadlines, properly running equipment is a must.

“These contractors are under huge time pressures,” McCarthy said.

McCarthy has been a PIRTEK owner for 13 years. Together with PIRTEK Red Oak on the south side of Atlanta, their fleet of 10 vehicles covers an area that runs from Rome, Ga., all the way down to Macon — geography PIRTEK can hit within the 60-minute timeframe.

Atlanta isn't the only place where PIRTEK helps keep stadium work on track. The Miami Dolphins' stadium is getting a major renovation as a fleet of cranes lifts components into place for new audio, video, lighting and an open-air canopy. When one of those cranes needed hydraulic hose replacements recently, the crane company contacted PIRTEK Doral in Doral, Fla., to do the job.

Currently called Sun Life Stadium, the venue in Miami Gardens, Fla., is home to the NFL's Dolphins, the University of Miami football and the Orange Bowl games. The retractable canopy being installed will give fans relief from the sun while allowing enough of the natural light in to sustain a natural grass field. The goal is to have the renovations set for the Dolphins' September kickoff.

One of the cranes, however, had two hoses that needed attention before it could do any more work. A PIRTEK technician examined the hydraulic hoses and performed all the custom fitting inside the vehicle.

In addition to doing the necessary repairs on the crane, the technician performed a proactive check of the other hoses and discovered that three of them would soon require servicing. As a result, the company called PIRTEK back onsite to do the work a few weeks later.

“They really didn't want to wait until the hoses blew, so they called us to replace those, too,” said Carlos Shortt, owner of PIRTEK Doral since it opened in October 2015.

PIRTEK Doral has four mobile service vehicles and a staff of seven. The proactive hose inspection was consistent with Shortt's philosophy of serving customers in the long term.

“We want to build relationships with the customer, so it's more than just doing one job for them,” he said. “We want to tell them, 'We'll be here for you.' They can be confident that we'll do all the work in the long term, not just in the moment.”

Shortt said that customer comments indicate his efforts have been paying off.

“They tell us they can count on us, and they know we're going to be ready for them anytime,” he said. “It's because we work 24 hours a day, seven days a week, with an ETA of one hour. Helping companies meet their deadlines is part of our strong sales strategy.”