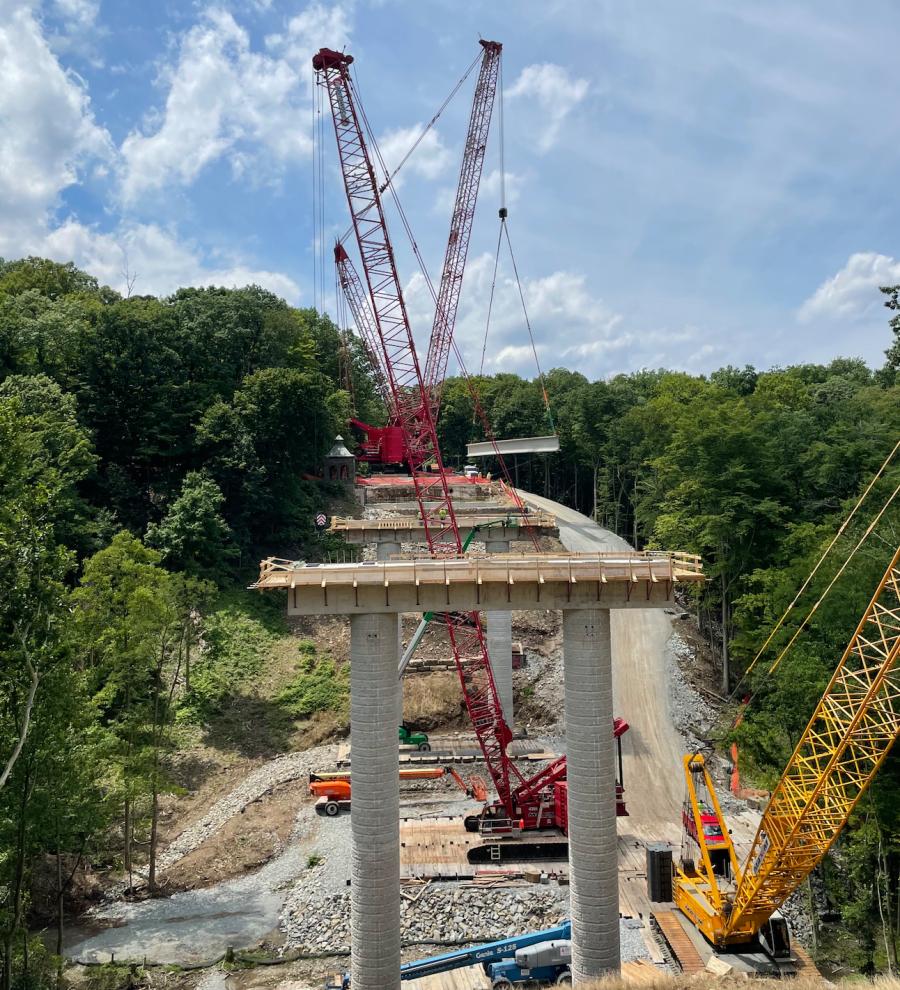 Plans are to open the bridge before the end of the year and fully complete the project later in 2023. (Photo courtesy of Robert M. Byrnes, PennDOT)

The Pennsylvania Department of Transportation (PennDOT) continues to move to open a new bridge at the site of the Fern Hollow Bridge in Pittsburgh, Pa., less than a year after its collapse.

The bridge on Forbes Avenue between Squirrel Hill and Point Breeze collapsed on Jan. 28, 2022. Under an emergency grant of $25.3 million from the federal Department of Transportation, PennDOT began work on Feb. 3. The contract was awarded to Swank Construction under the direction of Pete Douglas. Plans are to open the bridge before the end of the year and fully complete the project later in 2023. 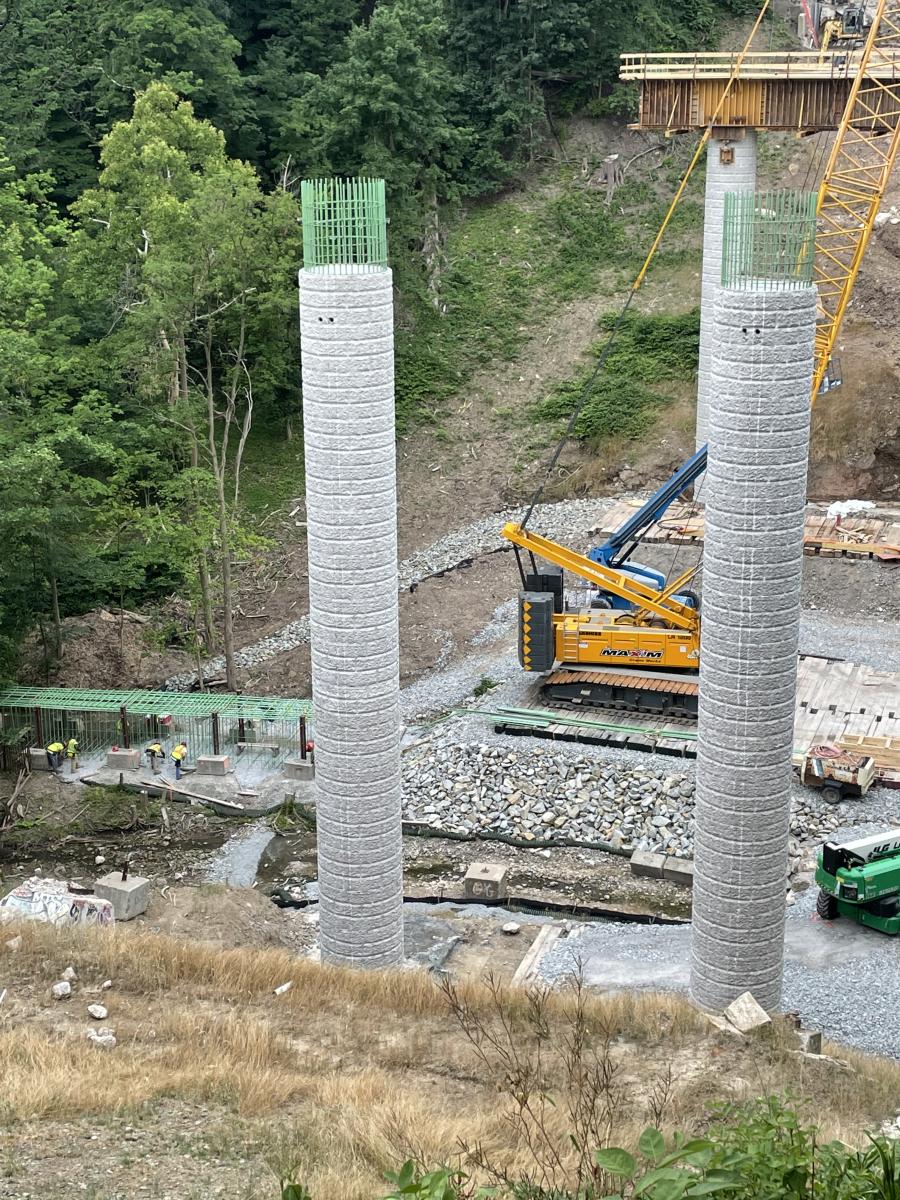 The contract includes the bridge collapse demolition and new bridge design and construction.

"I guess they entered into a legal agreement in the first few days with the city so that PennDOT could take over the design and construction responsibilities for the project, to replace the bridge," he said.

Jason Zang, assistant district executive, construction, PennDOT District 11, said that they were also talking closely with FHWA in regard to how they could proceed as quickly as possible.

"They basically said what you want to do is pick a contractor and that's how we did it," he said. "So, we picked a contractor and we picked a consulting firm right out of the gate and that was I think day one or day two. That was right there after the collapse. In all PennDOT districts, the primary function is putting projects out to bid, so it is kind of our specialty of getting projects out to contract and to bid. None of us want to see that in our career and I hope we never have to see it again, but that bridge carries like 20,000 vehicles a day, I think. The goal was to get the bridge replaced as quickly as possible. That's always been the goal."

Thompson reported in late September that the collapse was first cleaned up, restored and wasted, and a concurrent design and construction was begun.

"Actually, the design started about a month before we could start construction because we had to have some plans for the foundations prepared, so right out of the gate they did core borings and started on their foundation design," he said. "Pretty quickly out of the gate, we narrowed down the construction type. We basically determined the width of the bridge — the bridge needed to be the same that was out there now due to the right of way that the city had through a park and everything."

Once the span configuration was determined, the contractor worked quickly to determine the most quickly available structure type: steel or concrete. Based on cost and availability, pre-stressed concrete I-beams were chosen.

"The big driving factor in the schedule was when could the beams be delivered," Zang said. "We took that date based on when the beams could be delivered and we backed into April … so we weren't out there just pitter-pattering around. We wanted to be efficient, so there was some time there where there wasn't much going on on site, but there was a lot of the design work going on. But we based the groundbreaking on when we started our foundation. It was all based on when the beams would show up."

As the beams were being constructed, the designers were finalizing the columns and pier caps on top of the caisson foundations and designing the abutments. The beams started arriving in on July 25.

"There were some challenges associated with that," Zang said. "They could deliver two beams a day. Once they came into Pittsburgh, the city coordinated and escorted the beams through the congested areas of Oakland. Oakland's a pretty busy area, so they escorted the beams through Oakland, we got them in and erected two a day for the first two spans. So, we had the first 14 beams erected, two a day, and then they brought in span three from a different direction, not through Pittsburgh but from the eastern side of Pittsburgh through Monroeville and they backed them up the street. That drew a lot of attention when they closed the street and backed them up Braddock Avenue and onto the site."

"They erected the Span 2 beams with the large crane that was sitting up on the abutment," Thompson said. "They erected those Span 2 beams onto Span One and then the next day they had a smaller crane, although it was a very large crane. And they had a smaller crane sitting down in the valley. Then they did a two-crane lift — a dual lift — and one crane picked either end of it while it was sitting on Span One. Then, they both lifted it into position in Span 2 because there just wasn't a crane available with the radius and capacity to lift the beam from behind the abutment clear out to the center span."

Concerning challenges, Thompson spoke about the effort involved to quickly, concurrently design and construct a bridge and literally start construction when you only have the foundation plan to prove.

"Another big challenge I personally have dealt with, like Jason [Zang] said earlier, we're really good at developing designs and preparing a bid package and putting projects out to bid and contractors bid on a project and give us a price for a bridge," he said. "But [with] this one, there was nothing to bid."

Instead, the contractor and designer were selected and then prices were negotiated. As the bridge was being designed, the foundation plans were approved, so that cost was negotiated.

"We were negotiating the cost piece by piece, which is pretty challenging, but we're getting through it," Thompson said.

On the design side, he noted that PennDOT design project managers went through the process on a very accelerated schedule.

Working with utilities also has been a process, including relocation and a 16-in. gas line that was severed during the collapse. 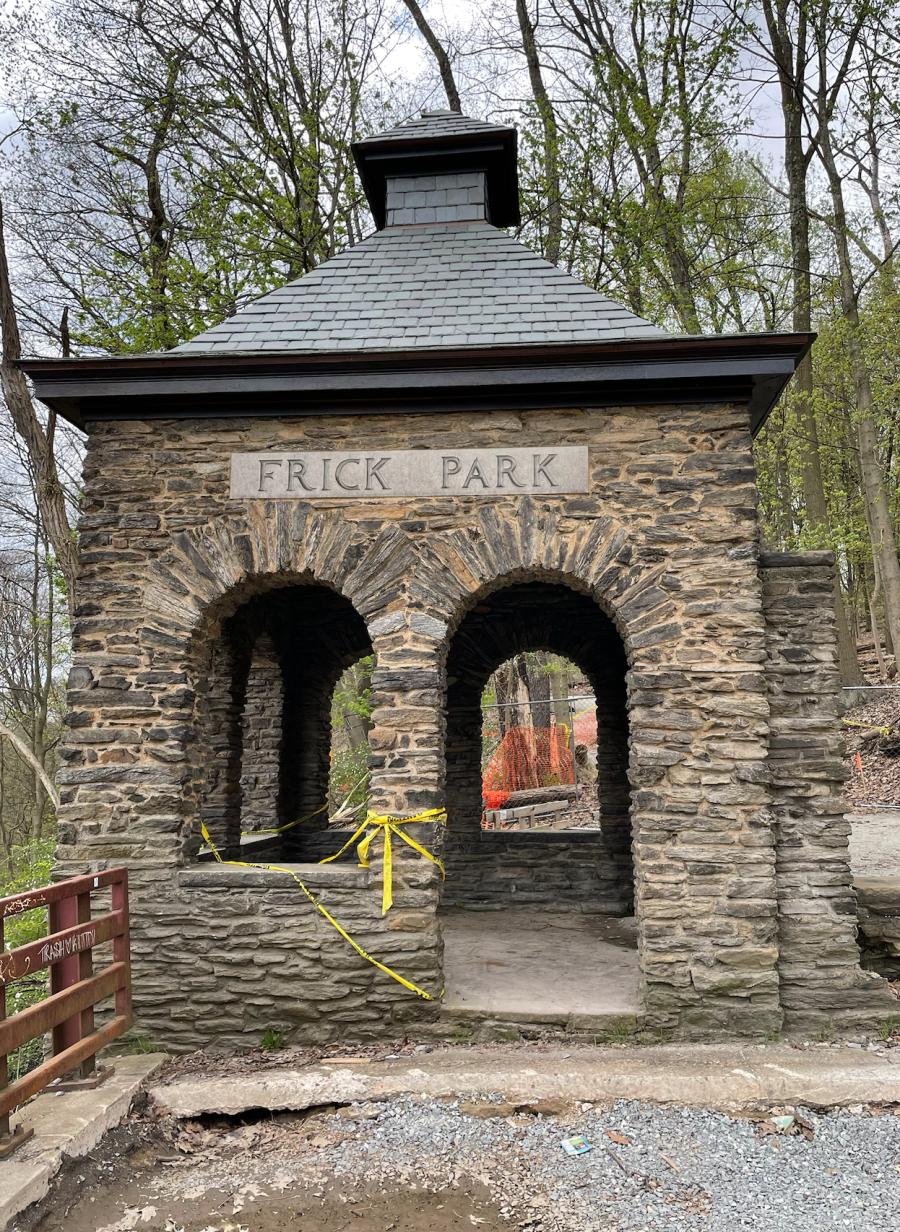 Another challenge noted by Thompson was the protection of what is referred to as "the gatehouse," a historic pavilion structure made of stone right at the corner of the bridge.

"We had to figure out how to protect that while we excavated down," he said. "That gatehouse was a challenge that we worked through."

The structure was 2 ft. from vertical construction and a temporary shoring wall was built in front of it.

Thompson reported that plans call for a polyester polymer concrete overlay to be incorporated into the project to protect the concrete. This is something new to Pennsylvania.

He also noted that the columns on the bridge will have form liners to make them look similar to the cut sandstone on the original bridge foundations. They will be stained to match some of the existing sandstone abutments that were maintained on the bridge.

"We looked around to see what aspects of the old bridge did we want to try to leave around, such as the old abutments just to maybe tell the story of what was there in the past," Thompson said. "We decided to leave the old foundations from the K frames in place as well and it was thought that possibly somebody might want to try to put a plaque up or something and tell the story of the bridge collapse and have those old foundations there potentially for that use."

According to Zang, one of the biggest challenges was just the high-profile nature of the project.

"Because the bridge collapsed and it had national attention; it was the day President Biden happened to be in Pittsburgh," he said. "So …everyone's looking at it and we've been very careful and very cautious with what we're telling the public. We're keeping a close eye on the schedule and the team has really been working hard. Everything's overlapping. This is completely different than what we're typically doing in Pennsylvania and it is allowing the project to go a lot quicker because you have construction happening while design is happening. It's not linear like every other project.

Smaller equipment such as excavators, dozers and small cranes are owned by the contractor, but large cranes were rented.

Major subcontractors for the project include PENNSTRESS of Roaring Springs, Pa.; Weatherspoon and Williams LLC of Coraopolis, Pa., for beams; Hall Industries, Elwood City, Pa., for bridge railing; and HDR of Pittsburgh, Pa., for the design.

Traffic was detoured on the day of the collapse and has remained so throughout the project. This also includes pedestrians in the area. CEG