Work began last February on a $320 million expansion that will be done in four separate projects. Completion of the construction should be in early 2019. 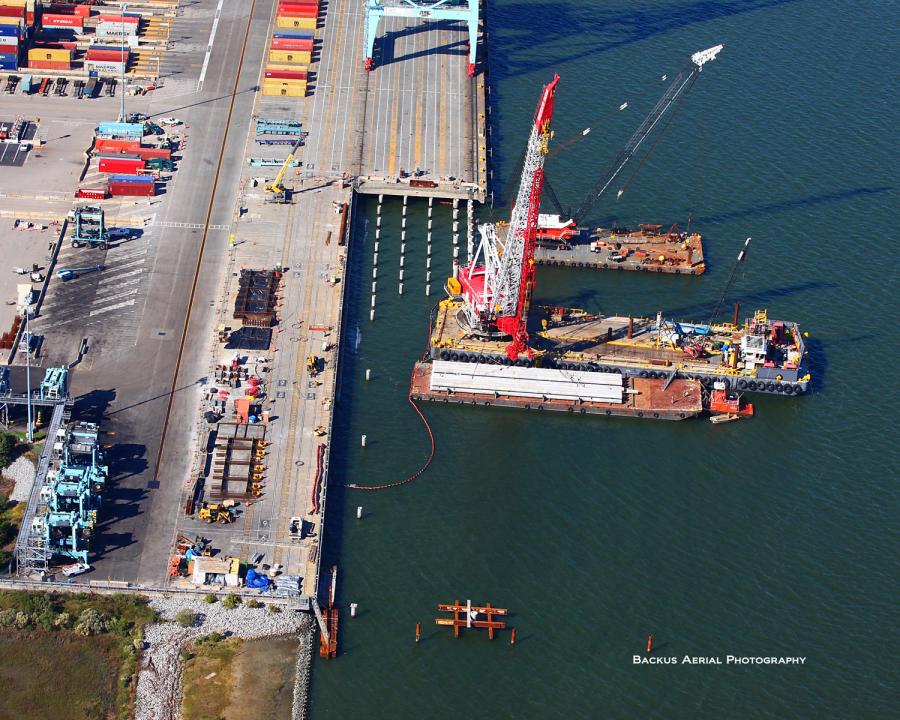 The Port of Virginia is making a bold statement to nearly double the size of its already massive marine container facility in Portsmouth. (Backus Aerial Photography photo)

Several major shipping ports and cargo terminals are located on America's East, West and Gulf coasts — and all are locked in a competition to attract more business.

The companies with which they want to do more business are those carriers that ship products to and from the United States by means of giant cargo ships. At the same time, ports and terminals also are looking to increase revenue by modernizing the rail and truck facilities they use to keep that cargo moving on land.

With that in mind, the Port of Virginia is making a bold statement to nearly double the size of its already massive marine container facility in Portsmouth.

The Virginia International Gateway (VIG) is located on 576 acres along the Elizabeth River and is the largest privately-owned container terminal in the country. It also is one of the only functional automated terminals in the Western Hemisphere.

Work began last February on a $320 million expansion that will be done in four separate projects. Completion of the construction should be in early 2019. The goal of the work is to increase the container capacity by 40 percent, or by 1 million container units.

When finished, the new effort, combined with a similar project in Norfolk, should attract more ships and carriers to the Port of Virginia like bees to a hive.

“This is an important milestone in our effort to increase sustainability and to prepare this port for what is to come,” said John Reinhart, CEO and executive director of the Virginia Port Authority (VPA), in a press release. “We are adding capacity so we can handle the cargo that will be coming to us in the very near future.

“The big ships are here —more are on the way — and they are carrying significant amounts of containers, and Virginia will be ready to accommodate that volume.”

Indeed, unbelievably large ships are on the high seas and the most modern and efficient container terminals — and the states and communities in which they are located —should see the most economic benefits by servicing them.

The VPA projects the expansion's potential economic impact could result in 166,000 jobs across the state, $22 billion in additional spending and more than $636 million in state and local taxes.

Reinhart and the VPA want the Port of Virginia to be the East Coast's premier entry point for cargo containers.

At every moment of every day, hundreds of giant cargo container ships make their way over the world's seas and oceans — bound for ports on six continents.

The biggest vessels can move hundreds of 20- and 40-ft. containers between large, specialized terminals, where their cargo are either loaded or off-loaded. Shoreside gantry cranes are used to move containers on and off docked ships at a rapid pace.

Trucks and trains then transport the cargo in or out of the terminals.

Currently, the VIG has a capacity of about 650,000 containers at its terminal, but with the expansion, it should be able to process 1.2 million units annually.

According to Joseph Harris, senior director of communications of the Port of Virginia, the project will enlarge the container stacking yard, on-dock rail operation and truck gate, as well as extending the wharf to accommodate larger ships.

“The purpose of these projects is to increase the port's capacity to handle containerized cargo,” said Harris. “This will be accomplished by almost doubling the capacity of the rail and stack yards and expanding the number of truck gates. As the phases get completed, they will be tested and put into service so we can begin capitalizing on our investment. The first stack yard phase is scheduled to go into service in April 2018 and from that point forward the stack will go in service monthly through the end of the following summer.”

The wharf work began in mid-March and is designed to create new berth space, which will be used to handle a larger class of container ship that will begin traveling the Atlantic Ocean before the end of the year. A longer wharf at VIG will also make way for four new Suez-class container cranes that will handle the big ships and their loads. That phase of the project is scheduled for completion in early 2018.

Suez-class vessels are among the largest in use. The term refers to a ship that can transit through the Suez Canal, or any of the world's major canals, in a laden condition. Typically, the deadweight of these boats is about 160,000 tons.

A Flurry of Activity at VIG

Harris said the primary focus for the various contractors on the VIG has been to maintain the construction schedule on the four phases while avoiding impacts to cargo operations.

“To address this challenge, we built temporary roads to allow continuance of intermodal traffic to and from the rail yard; established a manned entry-control point at the main port entrance to streamline the flow of port and construction vehicle traffic; and carefully chose pile-driving barge locations to prevent impacts to vessel berthing,” he said.

The remainder of this year will see continued construction to prepare for delivery of the first rail-mounted gantry cranes early in the new year.

The truck gate phase of the work is the only one not currently under way, but Harris said it will begin soon.

He added that about 100 people are working on-site at the moment, but expects that number to peak at 150 as all four phases are underway at the same time.

A respected group of contractors are involved in expanding the VIG's capacity.

CH2M, a global engineering firm with offices in the Tidewater, is the designer of record for all four phases and is providing on-site construction management.

The wharf construction is being handled by Weeks/McLean JV, while Allan Myers VA Inc. is preparing the stack yard, where the company removed about 247,500 cu. yds. of material.

Virginia-based Branch Civil Inc. has been tasked with expanding the rail yard by adding 9,800 linear ft. of crane rail and 18,000 linear ft. of train rail. Another Virginia firm, Asturian Group, will soon begin work on the truck gate expansion.

Harris did not specify the types of equipment being used on the VIG project, but said that machines made by Caterpillar, Massey Ferguson, Kubota, Mack Truck and Grove Cranes, among others, can all be found working at the site.

“Specialized equipment is being used for placement of the crane rail and train rail on the stack yard and railyard expansion projects,” Harris said. “We also are using two barge-mounted cranes for the wharf expansion and barges are being used to transport bedding stone and anchor stone to the site.”

The work over at the stack yard has included bringing in 8,500 cu. yds. of concrete, 120,000 tons of asphalt, 41,000 linear ft. of crane rail, 88,000 cu. yds. of crushed stone and 30,000 sq. yds. of woven geotextile fabric. Thirteen new container stacks will be added to bump the total at VIG to 28. Twenty-six additional rail-mounted gantry cranes will also be readied for operation.

The truck gate expansion will add four additional inbound lanes to increase the total to 17 inbound and 13 outbound, Harris said.

Just across the river, work also began last summer on the port's other large capacity project: the expansion of the south stack/container yard at Norfolk International Terminal (NIT). This $350 million construction job will expand that terminal's capacity by 400,000 containers. It is slated for completion in 2020.

“This sends a very clear message — worldwide — that The Port of Virginia is investing for the long-term and we will be able to service the vessels of any ocean carrier here at what will be one of the most modern and efficient container terminals in North America for decades to come,” said Virginia Gov. Terry R. McAuliffe in a statement.