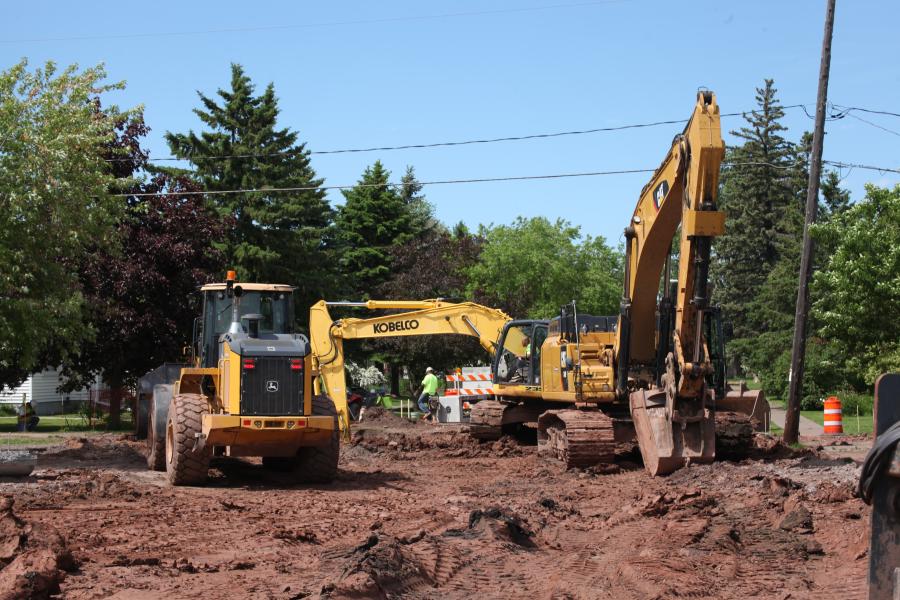 A large portion of the Belknap Street reconstruction included the rebuild of more than a dozen intersecting streets going back to midblock.

Business owners and residents neighboring a 1.4-mi. section of a primary arterial in Superior, Wis., will soon see their two-year trial of construction noise and traffic inconvenience come to an end.

Road construction crews are well into the final season of pouring four lanes of new concrete and sidewalk along U.S. Route 2 in the Lake Superior port.

The city of Superior, along with its twin port of Duluth, Minn., is the innermost port of call in the United States for international shipping. Cargo ships motor into the twin ports from the Atlantic coast 2,340 mi. away through the St. Lawrence Seaway.

The graceful, tied-arch Bong Bridge, which opened in 1985, carries Route 2 traffic over 8,300 ft. of Lake Superior harbor to connect the two cities.

Chippewa Concrete Services took on the two-year, $23 million project. The family-run company is nearly 40 years old and provides major paving and concrete services for its clients.

Chippewa Concrete Services brought in approximately 15 subcontractors throughout the two-year project while working under heavy traffic and pedestrian volumes to complete the many phases of the road.

The city of Superior and the state of Wisconsin are sharing the costs of the project.

Chippewa Concrete Services Construction Superintendent Barry Bohman said he is pleased with the progress of the construction and the team effort behind it. 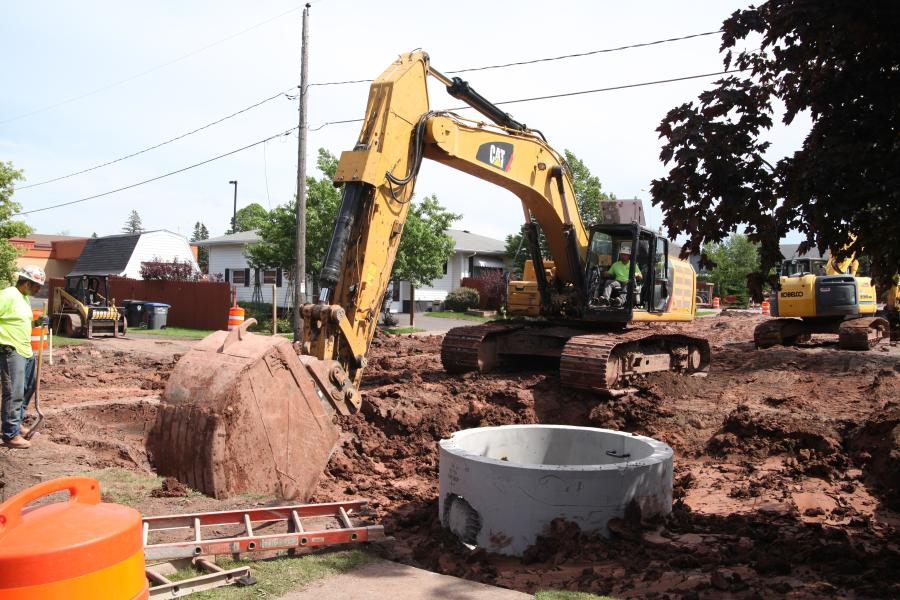 “Construction has been going very well. Between our project staff and our subcontractors, we were able to work the project very well. We finished the first year's construction in the middle of October last year and 18 days ahead of schedule,” Bohman said.

“The staff that represented the city and the state worked well with the contractors and were able to address any unknown or unforeseen problems in a timely manner when they came up.”

Wisconsin Department of Transportation (WisDOT) Project Manager Brendan Dirkes noted that Chippewa Concrete Services staff has completed many projects for the state and that “they have been very fair and good to work with.”

This year, though, the weather decided to give construction crews a run for their money when a mid-April blizzard brought blinding winds and a foot of snow to this part of the Midwest, forcing a one-week delay of the early-April startup date.

Then, heavy rains in June idled crews for approximately a week.

Now crews are working 12-hour days, six days a week, and Bohman is confident they will finish by the scheduled date later this fall, if not sooner. 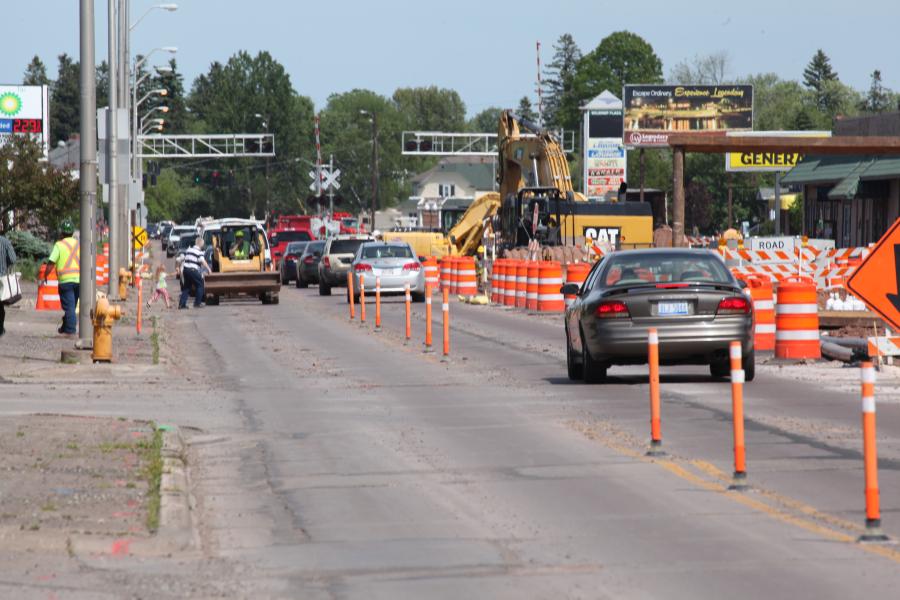 The construction site is a busy and congested mass of moving traffic and pedestrians.

As traffic winds around the final curve of the eastbound lanes of the Bong Bridge, drivers land in the city of Superior, where the road turns into Belknap Street, a mix of commercial and residential property that also serves as the primary access to the University of Wisconsin Superior campus.

A deteriorating road surface caused by years of storm runoff eating away at the pavement of Belknap Street and its dozens of intersecting arterial and residential streets created the need for the construction, said Dirkes.

“The pavement was in much worse shape than expected for its age because we did not have an underground drain system and the water had nowhere to go. It was at a point where it was becoming too much to maintain,” he said.

“The first year of construction in 2017 focused on the eastern and western ends of .5 mi. of the project because of the existing drainage characteristics of the street surface, while this year we're closing up the middle.”

New construction includes the removal of the existing road down to dirt and rebuilding it from sidewalk to sidewalk.

Excavation operations on this project are notable because 12,700 ft. of new water main will replace the existing and deteriorating pipe. An additional 4,500 ft. of pipe will be placed for new water services.

To fully serve the drainage needs of the new road, which required a significant upgrade to the old storm sewer system, approximately 15,800 ft. of new storm sewer will be installed.

In addition to the storm sewer, 400 ft. of sanitary sewer and another 23,000 ft. of underdrain will be installed.

Most of the dozens of street crossings also are undergoing reconstruction to midblock, which adds considerable length to the overall project, Dirkes noted.

Thirteen thousand tons of asphalt and 55,000 sq. yd. of concrete pavement are going into the new road surface.

Aesthetic street improvements include shrubbery and tree plantings, decorative walls and columns at the ends of the project, decorative streetlights and colored pavement at the pedestrian crossings.

All this work is taking place in limited public right-of-way space, with dozens of pieces of heavy equipment mixing with thousands of vehicles and pedestrians. The project therefore required detailed and complex traffic control plans and alternative pedestrian access planning.

At any one time, up to 45 workers are on site supported by dozens of pieces of heavy equipment including Cat, John Deere and Kobelco excavators, rollers, graders and dozers. 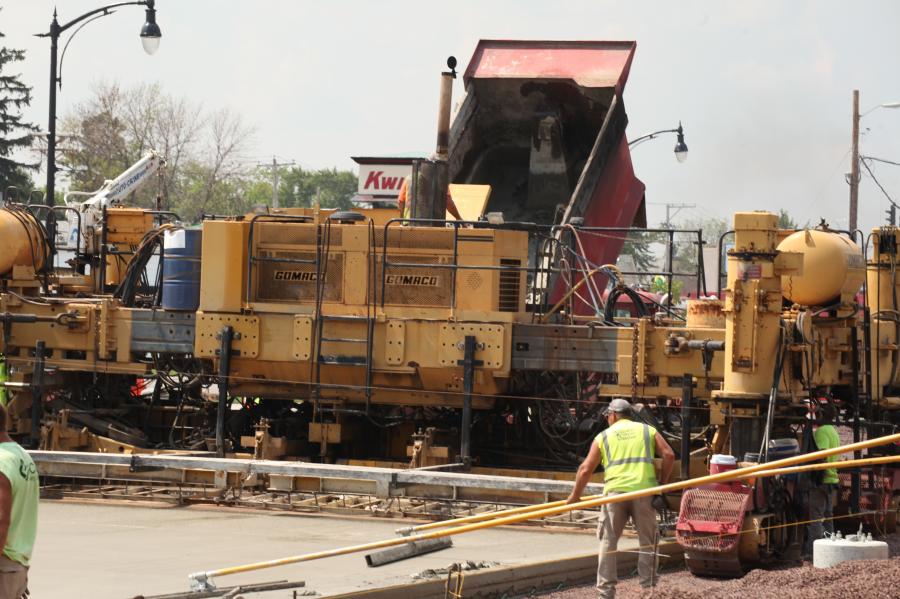 Flexibility, teamwork and a multi-element communications plan were key ingredients in the project's success, Bohman noted.

When construction crews ran into a fiber optic bank in conflict with the street lighting cable, Bohman relied on the quick response and cooperation of the fiber optic provider to dispatch crews to the site.

“That was done in a timely manner,” Bohman said. “The fiber optic crews were punctual and on time and completed the work in the time frame they originally scheduled it for.”

Flexibility also helped control costs at an intersecting street in need of repair, where, instead of making the repairs, Chippewa Concrete Services staff developed an alternative plan to pour new concrete, Bohman noted.

In addition, at a busy intersection with another city arterial, sewer and water crews had to make a series of service connections, forcing Belknap Street to close for one week.

The original plan called for the closing of Belknap to be stretched out over four weekends to keep traffic moving during the work week.

However, “after talking with the business owners, we determined it would be less of an impact to them to shut the street down for six days instead of four weekends, which worked out well and was well-received by the business people,” Bohman remarked.

The new water main construction presented its own challenges. 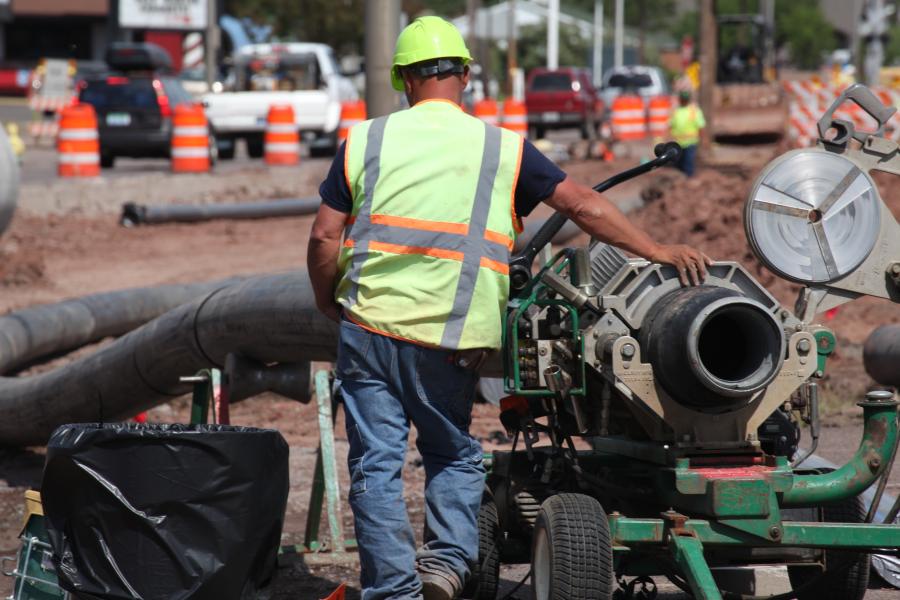 Water crews had to work alongside the existing, 80-year-old main, which was still in operation.

“Replacing the pipe was a challenge because the old main was so brittle it would sometimes crack and have to be repaired, which added time to the schedule,” Bohman explained.

Bohman credits WisDOT staff for developing an effective communications plan and his own staff for keeping the public informed, thus minimizing complaints about the dust, noise and traffic delays that are part of any construction site.

“WisDOT staff had prepared the residents and business owners well on the effect of the project to them and how it would affect traffic and access to their places prior to construction. Everyone was receptive and understood what to expect,” Bohman said.

“We meet biweekly with business owners and residents to discuss what is going on and ask what, if there is anything we can do to help them. And that always speaks to a good project, when everyone is aware of what is going on.”

“That made all the difference in the world here because it's very difficult building a project like this one under traffic conditions,” Dirkes added.

When crews pick up and leave the site later this year, city of Superior residents, business owners and visitors will have a new and smoother street to drive with enhanced aesthetics complemented by an improved sewer system.