Seventy percent of the debris is vegetation and 30 percent construction debris — referred to as C & D for construction and demolition, Jacquet said. 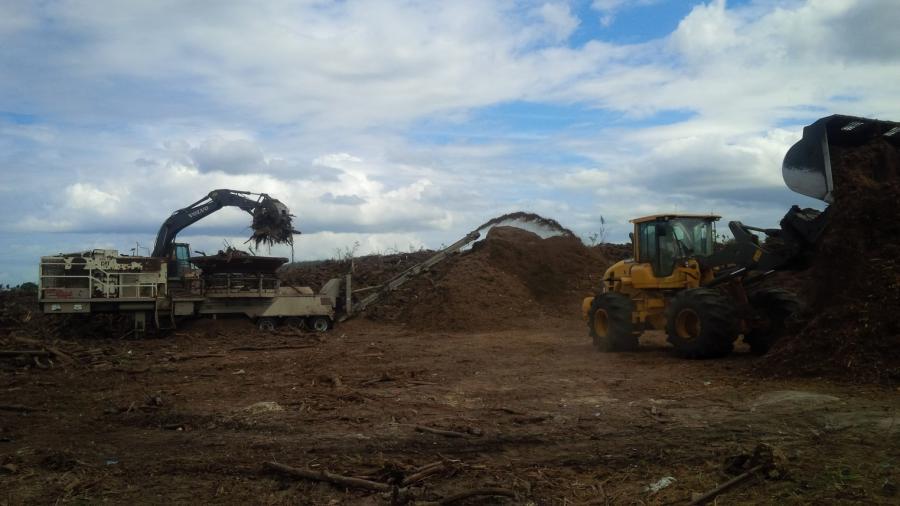 The vegetation debris is moved to a designated site where it is reduced by industrial-sized grinders — about 100 times the size of a standard tree shredder.

When Hurricane Maria, the devastating category 4 hurricane, made landfall on Puerto Rico on Sept. 20, it spawned what the island's Governor, Ricardo Rossello, deemed a “humanitarian disaster,” impacting the lives of 3.4 million U.S. citizens there. Months later, the work to restore the island continues, but it is a slow process that will not likely be over soon.

“The initial thing is getting the request from the municipalities or cities to ask us to come in and help them,” said Todd Jacquet, resident engineer of debris of the Army Corps of Engineers in Puerto Rico. “We already have a contractor on board prior to the disaster. The contracts are awarded in blocks of regions and in five year increments. The contractor, in this case Xpert's Inc., preplans his mission and how he plans on attacking the debris.”

Once the municipality requests help and the Federal Emergency Management Agency approves it, the agency then directs the Corps to begin work. So far, 54 of the island's 78 municipalities have requested help. FEMA posts fliers explaining how to place the debris at the curbside — the only place the Corps is authorized to pick it up. Crews are not permitted to go on private property.

“Fifteen municipalities have said they don't want our services,” said Edward Rivera, Corps spokesman. “The nature of having us do it, there's always a time lag. They have to request through FEMA. FEMA has to approve it, pass it down to us. The time frame of having us do it was probably a deciding factor. They probably felt they can get to it faster than we could.”

Other municipalities tried to manage the cleanup themselves before becoming overwhelmed and requesting help.

Seventy percent of the debris is vegetation and 30 percent construction debris — referred to as C & D for construction and demolition, Jacquet said.

“It could be wood debris from home damage, furniture damage from inside the homes, construction materials of any sort.”

The equipment used on the island is different than what would be routine in the continental United States.

“Here they use backhoes along with skid steers. They pull the debris from the curbside into the street and sandwich it between two pieces of equipment, then dump it into dump trucks. They use that type of equipment in neighborhoods where they do curbside pickup. It's just the culture of the island. In the U.S. they would use grapple trucks, self-loading with grapple arms.”

The vegetation debris is moved to a designated site where it is reduced by industrial-sized grinders — about 100 times the size of a standard tree shredder, Jacquet said.

Most of the equipment is already on the island, with about half a dozen more grinders scheduled to be shipped in.

The challenge once the debris is picked up is where to put it.

“We've picked up 263,000 cubic yards as of yesterday,” Jacquet said. “Currently, we are approved to clean up in 54 municipalities. And in those 54, the estimate there is 4.8 million cubic yards to be picked up. We're just getting ramped up with it.”

Several people have requested the shredded vegetation to be used for compost. The Corps is unsure how it will handle the remainder.

“We're trying to get it reduced by thermal reduction, but that hasn't been approved,” Jacquet said. “That's a nice term for burning it. The last alternative is using it as a cover in landfills. There is just so much of it all of it can't all be used in that manner as it would overwhelm these landfills.”

They're also working with the EPA and local environmental agencies to identify sites where the debris can be disposed of, but moving it off the island is not an option, Rivera said.

Another challenge is getting the large dump trucks into the mountain areas. In some cases, the only option is to use smaller trucks to ferry the debris down the mountain to larger trucks.

“There have been a lot of landslides from the mountains,” Rivera said. “They've cleared enough from the roads to make sure there is one passing lane, but the landslides have taken out the guardrails so it is still precarious. Also, flash flooding is still a danger because it is a tropical island.”

No one is sure how long it will be before Puerto Rico is restored.

“It's really hard to say because we haven't talked to all the municipalities,” Rivera said. “We don't know how many more are going to come on board.”