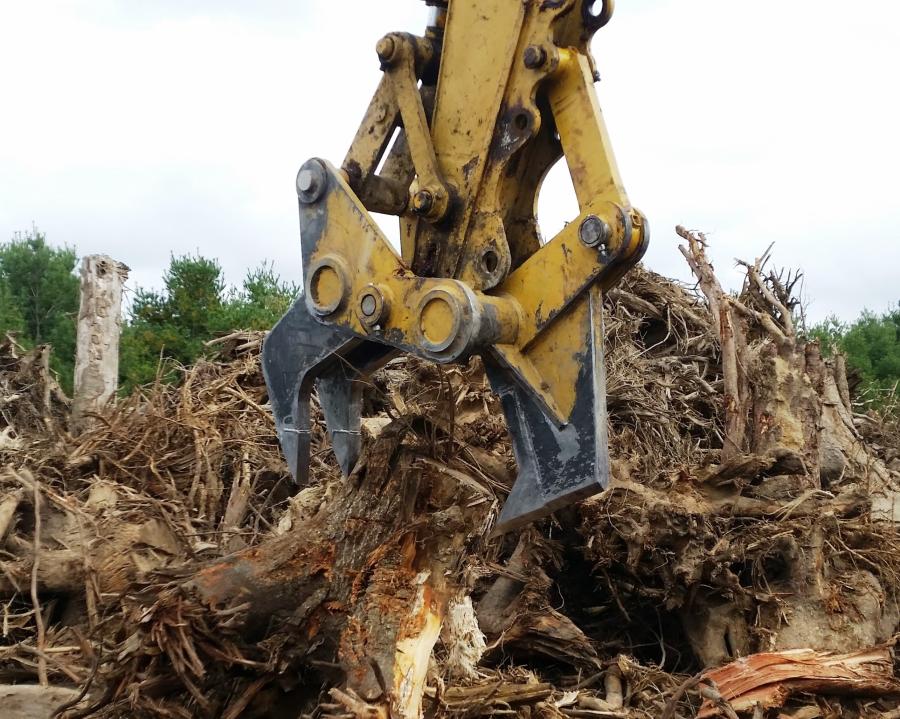 Jerry’s Lawn and Tree invested in a Ransome stump harvester to process tree stumps of up to 35 in. in diameter while clearing out building lots in southern Delaware.

Owner Jerry Santoro of Jerry's Lawn and Tree, recently purchased a Ransome RSH40 Stump Harvester from Ransome Attachments to improve the efficiency of its lawn, tree and lot clearing services. This new attachment is helping the firm to keep up with southern Delaware's noticeable uptick in development.

Having grown up in a New Jersey-based land clearing family, Santoro branched out on his own in 2005 to service customers in Sussex County. He runs the six-man operation with a sense of urgency that his customers were unaccustomed to in this slower-paced rural community. Santoro relies heavily on his machinery to maintain this pace.

Jerry's Lawn and Tree works for homebuilders and homeowners, clearing out entire premium wooded lots in subdivisions under construction, or selectively removing trees for homeowners. It became apparent that a more powerful stump harvester was needed as the crew encountered 35-inch-diameter timber on projects of up to 100 acres.

Santoro started researching stump harvester brands on the internet. He was soon referred to Owner Eric Ransome by his father based on a past business relationship. Santoro called Eric and discovered that the RSH40 was one of the most reasonably priced attachments on the market. He acquired a Ransome stump harvester in fall 2017 and mounted the attachment on a Hyundai 40,000-lb. excavator, which had been dedicated to stump splitting.

Santoro acknowledges that some of the more expensive brands offered more features, but he believes the Ransome StumpHarvester can outperform them.

Santoro learned up front that Ransome stands by its products. After ordering the stump harvester, he was informed that there would be a lead time of a few weeks while the attachment was being custom-manufactured in Philadelphia. Upon delivery it was determined that there was a slight discrepancy in the stiff-arm length because of the challenges associated with tying into an existing thumb bracket.

“[Eric] brought it back and made sure the stiff-arm length was correct,” Santoro said. “I've bought things before where people take your money and you never hear from them again. I'm really impressed with [the RSH40], and Ransome's service was awesome.”

The RHS40 is already being put to the test.

“We're in a development now and we've cleared 65 lots,” said Santoro. “There were a bunch of stumps up to 35 inches in diameter. That stump harvester has really, really been a blessing to help us turn those huge stumps into pieces so we can put them into a tub grinder.”

Jerry's Lawn and Tree is keeping the RSH40 stump harvester busy feeding the tub grinder on its own projects, in addition to processing material for other land clearing contractors. The attachment is used to break down large stumps and feed the grinder. The contractor relies on the stump harvester to support the processing of up to 100 yards per hour during a typical land clearing operation.

As a harvester, the RSH40 has even proven effective for extracting stumps from the soil, according to Santoro. Ransome Attachments was selling a traditional stump splitter before rolling out the RSH40 in September 2015 to grant customers this additional functionality.

Jerry's Lawn and Tree runs into a variety of trees including tulip, poplar, oak and pine. Despite having trees such as hickory and beech that he describes as “hard as a rock,” Santoro has not found a match for the Ransome stump harvester.

“On the smaller machine, sometimes you have to take time to work through it, but it will split anything I put in front of it. I have a smaller machine and I'm able to shear these massive stumps.”

The attachment was mounted with a direct pin instead of a quick coupler to maximize splitting force and reduce wear and tear.

Santoro has recognized the versatility of the attachment and is already looking to maximize his investment. Ransome is currently fabricating an accessory that will allow the RSH40 to function solely as a grapple.