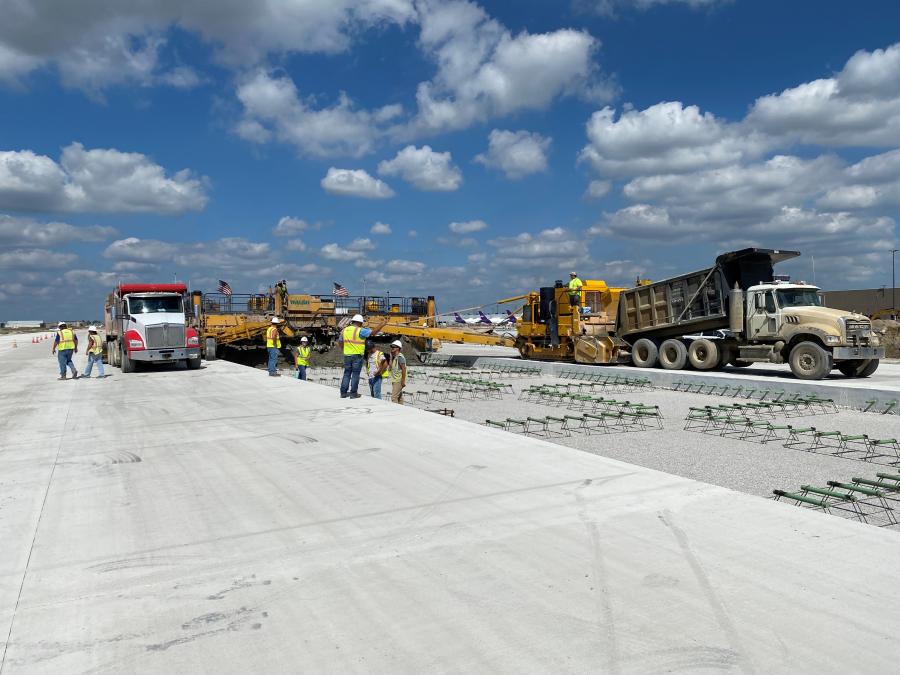 The massive rebuild of the runway will require 275,000 cu. yds. of concrete and approximately 200,000 tons of asphalt. (Walsh Construction photo)

Reconstruction of the runway at Indianapolis International Airport will help passengers, enhance freight operations and benefit the environment. The environment is not usually seen as a beneficiary of airport paving, but in this case, the airport has partnered with the Federal Aviation Authority (FAA) and the Walsh Group to achieve those ends.

Environmental specialists have often wondered what to do with the excess carbon dioxide generated by business activities. Planners for this airport project decided to try something new. Their solution was to bury the CO2 inside 22 in. of concrete.

During the paving operations on Runway 5-23L and taxiway D, Walsh inserted the CO2 captured at a mobile concrete batch plant into the concrete with no apparent effects.

"We worked closely with the FAA to implement guidelines that they had been developing for putting carbon dioxide into airport pavements," said Tony McMichael, director of airside development of the airport. "Their studies showed no impact on the pavements, and we have seen no effects either."

Workers are nearly complete on phase one of the three-year project. The cost of the project will be about $190 million.

"The need for new paving on the runway was evident, as it was last paved in the 1980s and early 90s," said McMichael. "Aircraft have changed since then. They are heavier and haul heavier loads. I believe this paving will hold up for the foreseeable future."

Indianapolis airport has two parallel runways. By breaking the construction into three separate pieces, planners have avoided significant impact to the passengers or freight operations. The three phases are planned for completion in 2024. Indianapolis International is a busy place with the airport carrying 7.2 million passengers in 2021. The airport averaged 112 flights to 44 nonstop destinations.

"Indianapolis is located at the crossroads of America," said McMichael. "We have a high volume of truck traffic on our interstates and a high demand for our cargo operations here at the airport. We also are a hub for other airports and their cargo and passengers. We are trying to do all we can here at Indianapolis International to make sure everyone around us has the services so they can maintain and grow their operations."

Walsh purchased a GOMACO GP 4 paver from Finkbiner Equipment for the paving. This paver enabled workers to make 37-ft.-wide passes and pave the 150-ft.-wide runways in just four passes. Fewer passes meant fewer joints and fewer places for cracks to develop in the pavement. The new equipment enabled the team often to pour 4,000 cu. yds. in a day. 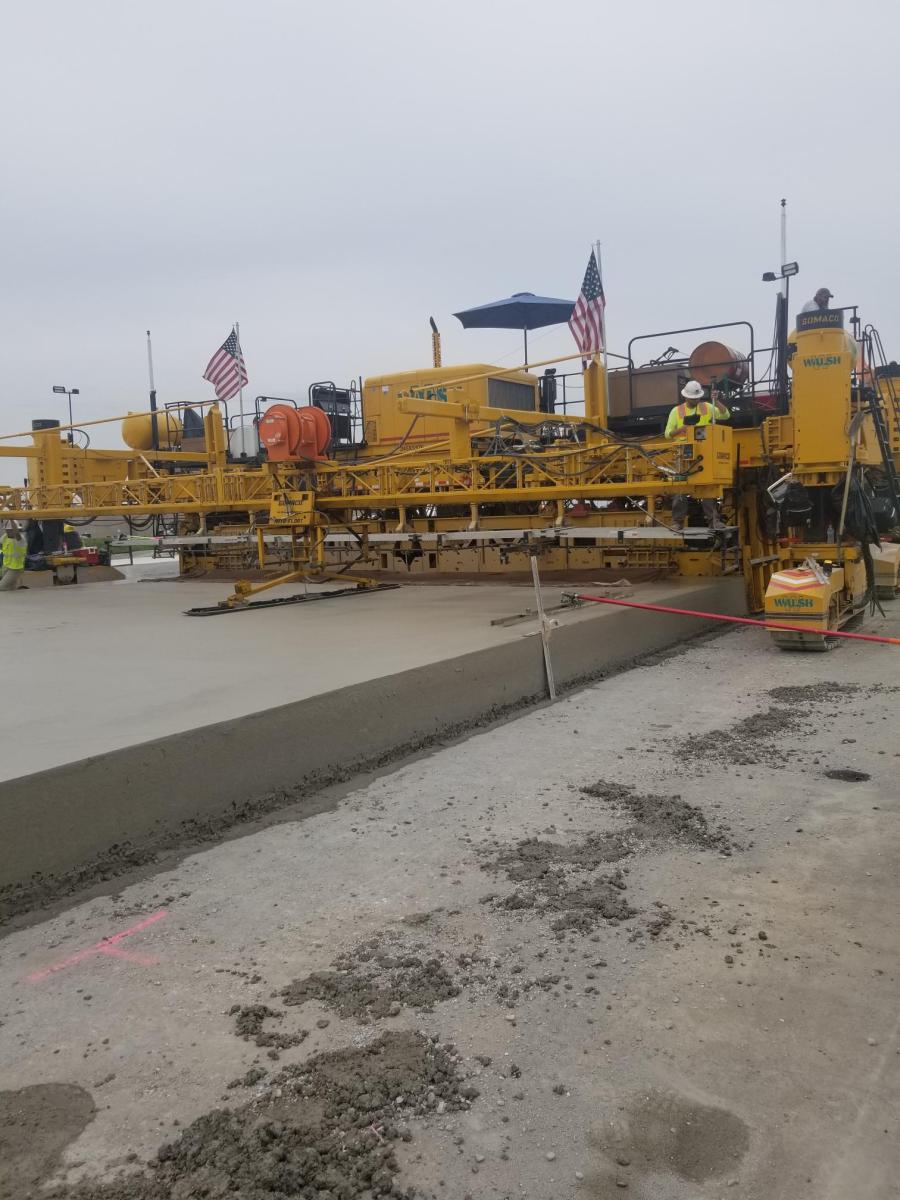 While Walsh continued working on Runway 5-23L, workers needed to keep access open to the main runway for the airline's partners. Indianapolis is the national hub for FedEx. The construction phasing ensured that taxiways were always open to facilitate FedEx flights during construction.

In addition to the extraordinary CO2 capture, the airport construction has taken additional steps that are environmentally friendly.

"Our contractors have crushed the old concrete runway on site and used it as a base layer for the new construction," said McMichael. "Securing sufficient trucking is difficult these days, so we are saving many truckloads by not hauling in virgin aggregate for the runway base. We also are using the asphalt millings to reinforce some of our existing service roads." 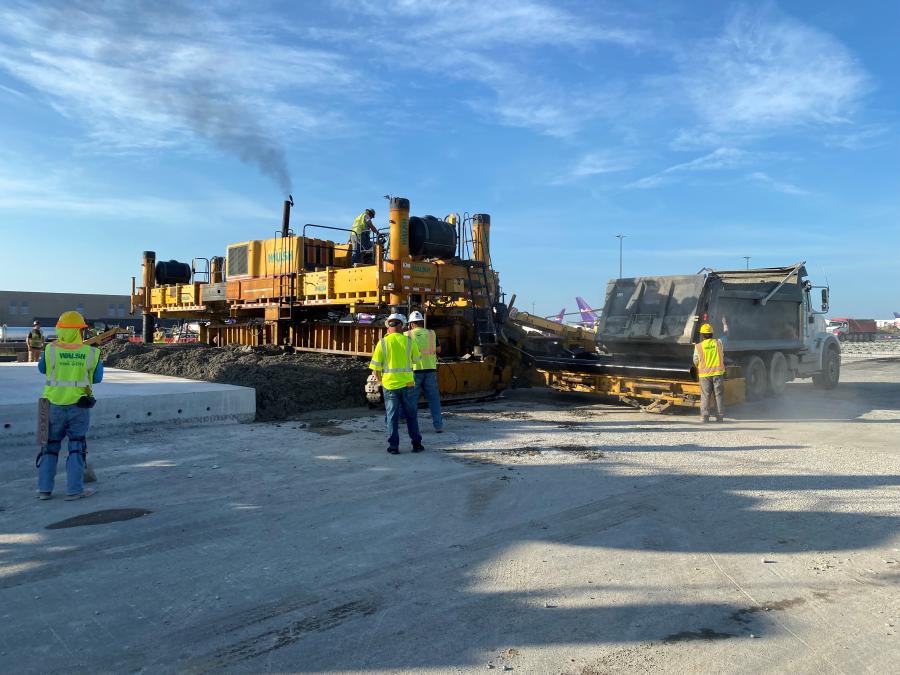 During the paving operations on Runway 5-23L and taxiway D, Walsh inserted the CO2 captured at an onsite concrete batch plant into the concrete with no apparent effects. (Walsh Construction photo)

Workers have installed LED lighting, which is more energy efficient than the old lighting.

Instead of replacing all the drainage pipe, a unique process called cure in place pipe (CIPP) is being utilized which provides a new inner liner in the drainage pipe. When the CIPP process is completed all pipe joints are eliminated and the design life of the existing drainage system is greatly extended. Many times, "green" construction activities have a positive impact on the bottom line of the project. In other instances, the project team sees them as the right thing to do.

"I don't believe the carbon capture technology had been used much in connection with airfields," said McMichael. "I understand that it had been used to put CO2 into concrete flooring at warehouses for Amazon, Walmart and other places. We worked with the Tech Center people at the FAA to do a pavement design that used this concept.

"For our project, we were able to take the CO2 from an industrial source and put it into the concrete," said McMichael. "Then it is no longer an emission, and it doesn't affect the concrete. It was a win-win-win for us, for local people and for the environment." CEG 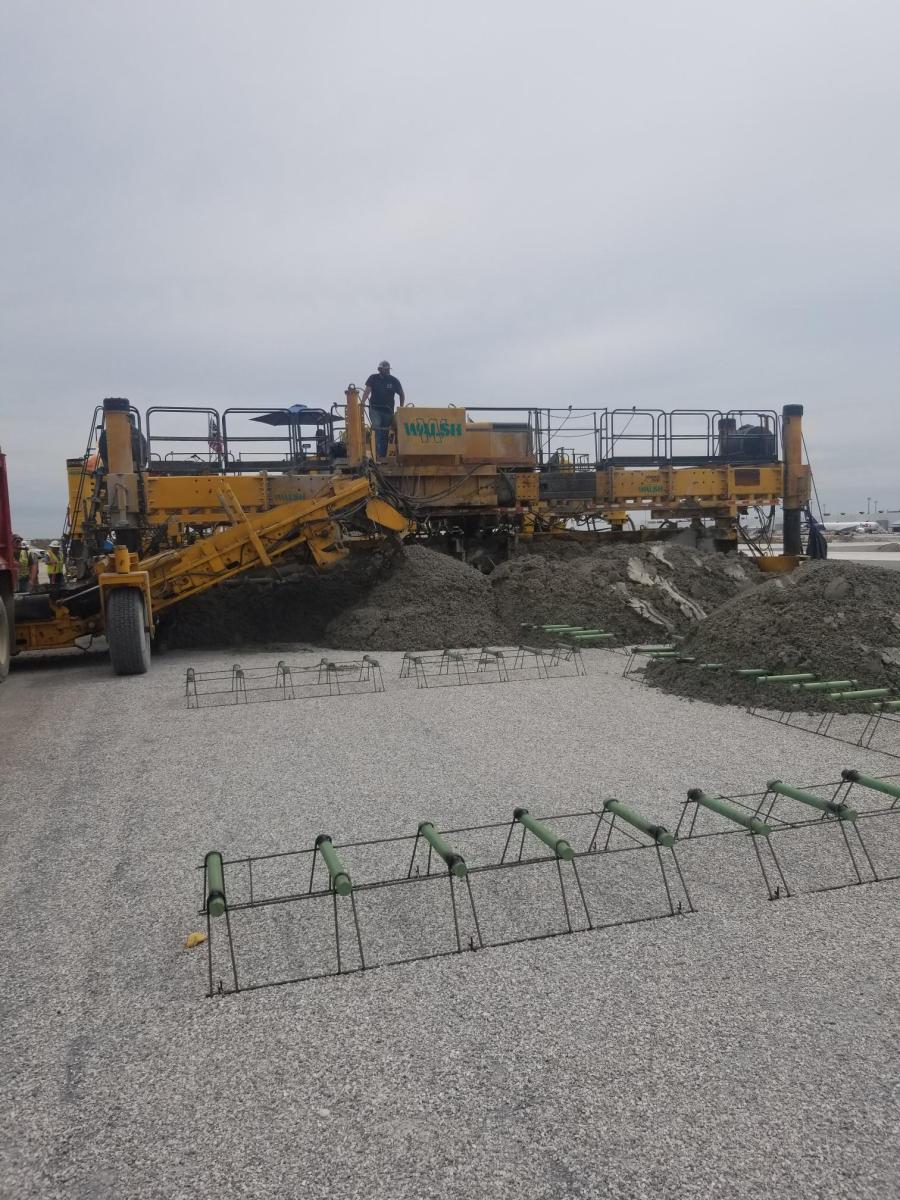 GOMACO's GP 4 paves up to 40 ft. and is available in two tracks or four tracks. (Finkbiner Equipment photo)

"The airport contract documents specified that we needed to pave at 37.5 feet wide and the GP 4 paver was the only GOMACO paver with that capability," said Filipowski. "The airport authority wanted to minimize longitudinal construction joints in the runway pavement to maximize the pavement design life and the GP-4 enabled us to meet that 37.5-foot paving width requirement."

GOMACO's GP 4 paves up to 40 ft. and is available in two tracks or four tracks. Equipped with G+, the unit interfaces with stringline or 3D machine guidance. It is equipped with a telescoping spreader/plow to spread concrete evenly.

"They have been our GOMACO dealer for more than 25 years and are reliable for service calls and parts orders," said Bailey. "Andy Bazan and his team at Finkbiner have always been available to us after hours and on weekends if the need arises."

Brad Barkema, district sales manager of GOMACO, worked very closely with Walsh and Finkbiner Equipment to order the right machine for this project.

"This collaborative effort was crucial to ensure that we received a machine that would not only work for this project, but exceed expectations," said Bailey.

"This paving setup enabled us to exceed the FAA P-501 smoothness requirement specification for the 22-inch-thick concrete pavement on the runway," said Filipowski. "Our highest production achieved to date was more than 4,700 cubic yards of concrete placed in a single shift. A typical concrete pour on the runway averaged approximately 4,000 cubic yards of concrete. We can use the GP-4 paver on many other paving projects, including highway jobs with dual-lane paving. It is also capable of paving three lanes wide."

Finkbiner assisted Walsh with the initial setup of the paver as well as the calibration of stringless paving system.

"The paver has performed well," said Bailey. "By having the ability to pave 37.5 inches wide, we were able to reduce the number of longitudinal construction joints, which results in less maintenance and extended lifespan of the concrete pavement. We've had a few small issues with the GP 4 that Andy has gone above and beyond to help resolve." CEG