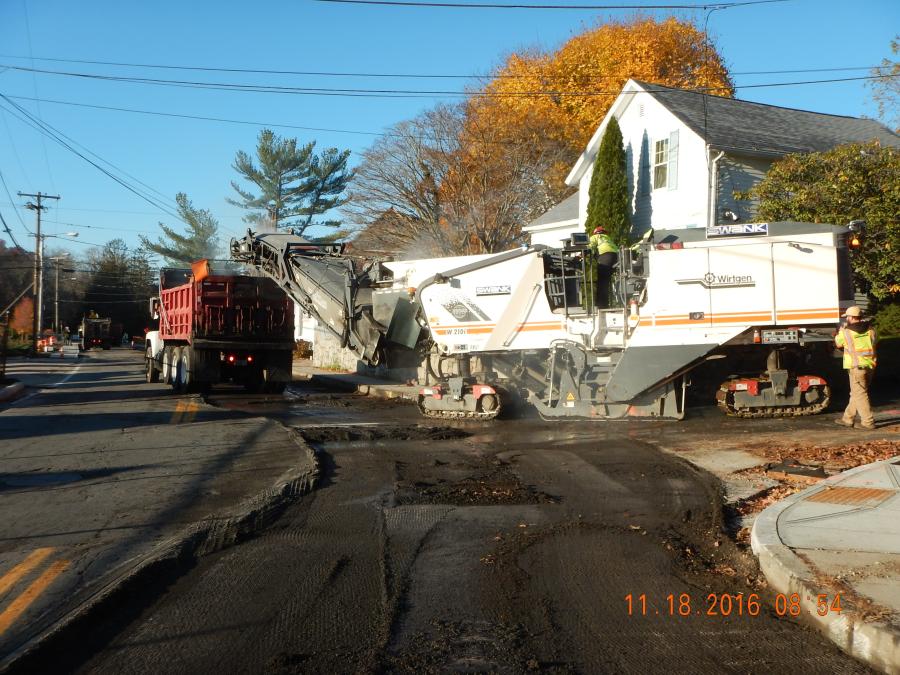 t’s all part of the 10 year, $4.7 billion RhodeWorks program that should change Rhode Island’s reputation from having some of the worst roads and bridges in the nation to some of the best.

Work is halted for the winter on a long overdue project to repair 1.3 mi. (2.01 km) of road and sidewalk between the Rhode Island villages of Wakefield and Peace Dale in South Kingstown. Workers will be back on the $6.5 million project in the spring and then move on to a $1 million storm drainage project in the fall. It's all part of the 10 year, $4.7 billion RhodeWorks program that should change Rhode Island's reputation from having some of the worst roads and bridges in the nation to some of the best.

“There is a lot of focus on our bridges,” said Charles St. Martin, chief public affairs officer for the Rhode Island Department of Transportation (RIDOT). “We have the worst bridges in the U.S. One out of every five bridges is structurally deficient. It lends us the distinction of being the worst. The program includes pavement projects, transit, ADA, bicycle facilities, you name it. The point is to bring roads and bridges back to a state of good repair.”

RhodeWorks includes the new organization of the agency departments, which previously did not have project managers, a new management philosophy and an overall new way of doing business, St. Martin said. It also features a new funding plan, which includes a tolling system for trucks only. Rhode Island is one of the only states in the northeast United States that does not charge user fees for large commercial trucks, St. Martin said.

“That will provide 10 percent of the RhodeWorks program. By giving us a boost in funding, we can accelerate the repairs. In accelerating our plan, we will address bridges that are not just the worst, but also address things we can see in the lifecycle that are about to enter that stage. It will not always be worst first, which is what we used to do around here. When we tackle a bridge, we might paint the beams, do concrete work, repair the bridge joints. Those types of projects.

We've run the numbers, this approach will save $950 million over 10 years. We are repairing items before they reach a state in much greater disrepair.

“High Street is different. The road has always had very poor drainage and flooding issues. The roadway basically needed reconstruction. It had not been rebuilt since the '30s. That constant presence of flooding really degradated the surface. The riding surface was exceptionally poor. In the winter of 2014-15 here we had double the normal amount of snowfall. Because of our position on the coast here, we get a lot of freeze/thaw cycles. Multiple snowfalls, freezing rain and two weeks later it is 50 degrees. Following that winter, this road really fell apart. We actually had to spend an emergency contract of $81,000 just to prepare the road so it was serviceable just until we could get the project going. At this point everything has to be replaced. The $81,000 was a basically a throw away. A Band-Aid.”

Under project manager David Capalbo, work on Kingstown Road/High Street work started last summer. It includes detours while maintaining important access to schools, the fire department and other facilities on the main route of travel. “Everyone is greatly assisting,” said Capalbo. “They are excited about completion next year.”

“It's pretty typical for a resurface. We found a large area of rock that was unexpected, mostly large boulders. Other than that, the project remains on time on budget moving right along.”

In the fall, crews will begin work to replace very old drainage pipes with an entirely new drainage system.

“What is unique about this project is the drainage work,” St. Martin said. “This is a developed corridor with homes and businesses. As we try to update the drainage, and meet the requirements for run off, we need to create different fixes. We don't have the physical space to address them. So we worked close with the Department of Environmental Management on the storm water project. We're taking it a step higher. There are three areas that will be doing storm water projects that will accept runoff from this road and other roads in this area. The Saugatucket River runs through the villages, empties into a saltwater estuary and into the ocean. Those three storm water facilities are actually going to be on town property, but we will build them. They will have retention ponds with infiltration features.

“We're investing over $100 million in drainage projects over the next 10 years. That's part of our commitment to address our storm water runoff and impact on the environment.”—CEG