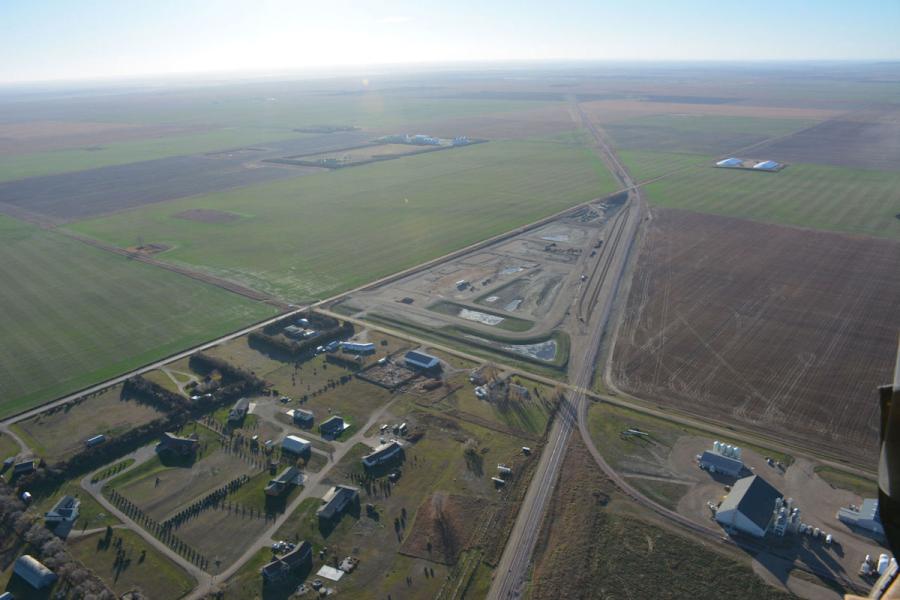 Ringneck Energy says it will begin construction Aug. 14 on its $150-million ethanol plant south of Onida, South Dakota on this 43.5 acre triangle shown in November 2016.

Interested investors have one more day to put money into the Ringneck Energy ethanol plant at Onida, S.D., that will begin construction in a few weeks, after a long, three years of development and fundraising.

“The last day of our equity drive is July 28,” said Walt Wendland, president and CEO of Ringneck Energy. “A year ago, we extended it for a year. Our time is up the 28th. Any new subscribers have to have the signed agreement and the money postmarked by the 28th [of July.]”

The money that now is due is 10 percent of the planned investment; the remaining 90 percent is due August 2, he said.

Over the past three years, Ringneck has struggled to attract investors, holding dozens of meetings across the region, in several states. Wendland also has had to hire attorneys to battle opponents, a handful of Onida residents who didn't want the big plant across the road from their homes on the south end of the Sully County town of about 660 people. Over more than a year, the opponents fought Ringneck's plan in court and at the county and state regulatory levels, saying they supported the idea of the plant but that the site was too close to town for health and safety reasons.

Ringneck has won those battles, Wendland says. A 2015 county-wide vote showed overwhelming support for the plant, and city and county officials have lauded Ringneck's plan, saying it will bring great economic benefits, as well as more people, to the community. The plant will use 25-million bushels of corn a year, and produce not only ethanol but the by-product of distillers grain that is a valuable livestock feed. The plant's 40 employees will be well-paid by South Dakota standards.

Three of the homes of the plant's opponents have, or soon will be, changing hands to new owners. Ringneck itself made an offer on one of the houses, but another buyer ended up with it, he said.

The past few months of raising equity investments have worked out better than hoped, he said.

The plan had been to raise about $75 million in equity for the proposed $150-million plant, to ensure enough capital to attract financing to get the plant built and operating.

In the end, the equity drive has put $85 million in the bank, he said. Or it will be in the bank once the final call for the money comes in August 2, he said.

Fagan Construction, which has built several ethanol plants, plans to have a crew of about 10 on the site to begin construction on August 14, Wendland said. As construction progresses, as many as 100 workers will be on-site, staying in area motels and campgrounds and other facilities, he said.

Construction is slated to be completed in 14 to 16 months, or by October-November 2018.

“They plan on working through the winter,” Wendland said on Wednesday. “Hopefully, we will have a better winter than last year.”

Ringneck itself has only one employee hired so far, he said. Carly Hancock will start as office manager in early August.

But the other 39 will be brought on-board in about a year, which will be about two months before the plant is expected to be ready to start producing 80-million gallons of ethanol a year from corn and, at times, milo, grown in the region. In fact, this year, the field just to the west of the plant site is planted to corn.

An initial group of 38 “seed” investors chipped in about $2 million to start things, and since, another 140 investors, large and not-so-large, have joined in the equity drive, he said. The total of 175 investors - individuals and businesses - are from nine states, he said.

They include three ethanol plants - Granite Falls (Minn.) Energy, Dakota Ethanol at Wentworth, S.D., and Chippewa Valley Ethanol Cooperative at Benson, Minn. -, which he has worked with over the years when he managed two ethanol plants in Iowa, Wendland said.

With Minnesota regulations making it difficult to build new plants in the state, investing in a new one in South Dakota is a good way for the Minnesota ethanol plants “to add gallons,” he said.

The equity drive went so well, that earlier plans announced months ago to sell tax-free, municipal revenue bonds through the City of Onida aren't necessary, he said. Long-term financing is available through Compeer Financial, a new cooperative formed just weeks ago.

On July 1, 1st Farm Credit Services of Minnesota joined with AgStar Financial Services and Badgerland Financial to form Compeer, which will provide ag financing in Minnesota, Wisconsin and Illinois.

With road improvements made to the site and a rail siding, Wendland pegged the total cost of the construction and initial operating costs of the plant at about $153 million.

Ringneck has touted the governmental support that comes to ethanol as a positive for the plant.

This summer, new President Donald Trump has spoken out on the need to “protect the corn-based ethanol and biofuels that power our country,” according to Ringneck's July newsletter.