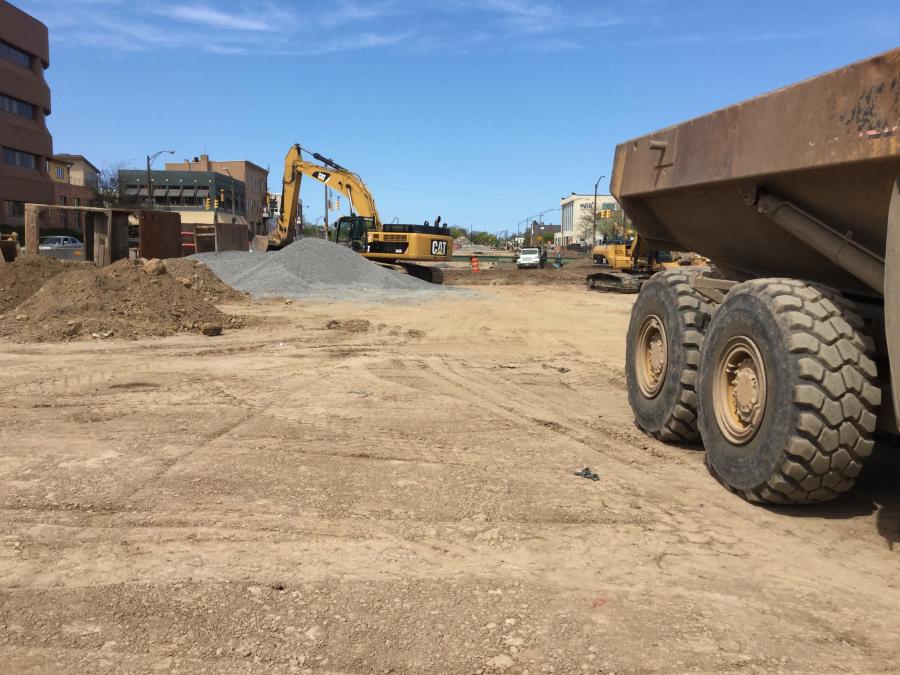 The federal government is funding the bulk of the project with $16.7 million from the TIGER program; the state is providing $3.8 million; and the city $414,000.

The project is converting a sunken section of expressway to the east of downtown to an at-grade “complete street,” that includes bicycle and walking paths.

The benefits, according to the city's web page, will improve traffic safety, support healthy lifestyles and improve livability, reconnect neighborhoods with downtown, promote development, and save the city money.

According to the website, “completion of this project is expected to open roughly six acres of land to mixed-use redevelopment, which could leverage an additional 430,000 to 800,000 sq. ft. (39,948 to 74,322 sq m) of commercial and residential space. Reclaiming this land will raise local tax revenues, create jobs and generate private investment.”

The project goal is to reconstruct a two-thirds of a mile stretch of the eastern segment of the Inner Loop between Monroe Avenue and Charlotte Street into a complete city street. To facilitate the work, the Inner Loop East was permanently closed in December 2014; the Broad Street Bridge was replaced with an at-grade street in March 2015; and the East Avenue and Monroe Avenue bridges were closed this year.

“The idea of filling in the Inner Loop has been discussed in the community for over two decades,” stated the web page. “As the facility has deteriorated over the years, support from surrounding neighborhoods, business owners, developers, and real estate firms has grown substantially. Transforming the sunken Inner Loop from a barrier to a beautiful, high quality street will benefit the entire community.”

Many streets and exits have closed permanently and temporarily, but the city is maintaining access to all local streets adjoining the project area throughout the duration of the project.

East Avenue was closed between Union Street and Pitkin Street while the bridge over the former Inner Loop site is removed and replaced with an at-grade oad.

“The biggest design challenge facing the Inner Loop project was going from preliminary to final design in eight months to meet the requirements of the Federal TIGER funding,” said James R. McIntosh, P.E., Rochester's city engineer. “We wanted to have the necessary public input on a project of this size and were required to meet the rigorous Federal Highway land acquisition process in a short timeframe.

“The project will save taxpayers by eliminating the need to maintain a twelve lane street with three bridges and replacing it with a three-lane at grade street that will in turn free up six acres of real estate for development,” he added. “The new infrastructure will address highway needs for the foreseeable future and return the area to a more appropriate urban street grid. The project adds the city's first dedicated bike facility 'Cycletrack' and provides wide sidewalks along the Union Street corridor for sidewalk cafés and pedestrian needs.”

Michael Nassoiy, Catco Construction's project superintendent, has been managing projects for 31 years (15 years with Catco) and he has a good handle on the challenges, especially the ongoing issue of utility relocation.

“It's coordinating utilities to be more three dimensional compared to a linear system,” he said. “You can't take all the bridges out right now because that would cut the city in half. We're dealing with sewer, water, and storm lines. All the water lines have been moved and we just finished the sanitary sewers.

The Inner Loop has been filled in with earth, with one half of the area slated for development and the other half for a six-lane boulevard (Union Road) that will have two lanes in each direction, a lane for left turns and a parking lane.

Catco crews are building Union Road and the crossovers where the bridges used to be.

The bridge work that was done was carefully planned, with bridges taking a week to demolish, which entailed closing a bridge, replacing it, opening it up to traffic and moving onto the next one slated for replacement.

“With the bridge out of the way,” said Nassoiy, “we can rebuild the utilities.”

Catco crews, about 20 people on site, are working day shifts. The only subcontractor brought on for the project is Pavilion, which is handling signs and markings.

So far no unanticipated challenges have been encountered due to pre-planning and scheduling, and flexibility.

“I've been doing this for over 30 years,” said Nassoiy. “It becomes old hat after a while. I usually help bid the projects. Plans change as the projects goes forward. You create a schedule and then you keep tweaking it all the time as conditions and situation change.”

Catco's main yard/shop is an hour from the work site, which allows mechanics to access the vehicles and equipment rapidly for repairs and maintenance.

“They deal with minor stuff such as oil change and tire puncture,” said Nassoiy. “They'll come in for a couple of hours and take care of everything.” —CEG