A sparkling new student-housing complex is taking shape in Tuscaloosa, Ala., within the shadow of the home stadium of America’s top college football program. 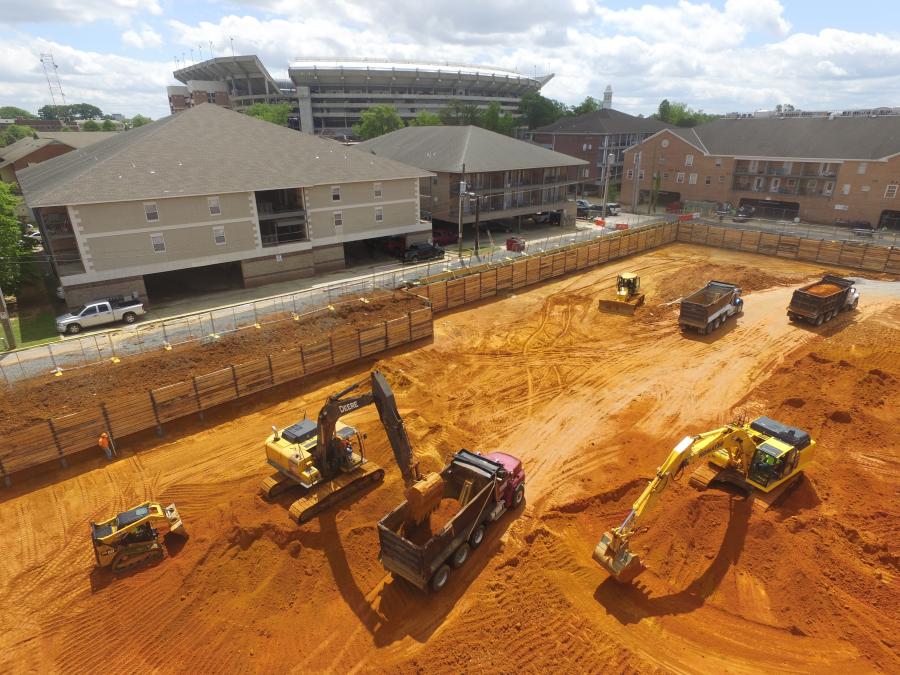 A sparkling new student-housing complex is taking shape in Tuscaloosa, Ala., within the shadow of the home stadium of America's top college football program.

A sparkling new student-housing complex is taking shape in Tuscaloosa, Ala., within the shadow of the home stadium of America's top college football program. The new structure is certain to be a much-desired place to live for new and current students at the University of Alabama.

Undoubtedly, its many features and amenities also will make parents and older fans long for their college days again, too.

The Hub at Tuscaloosa is an eight-level, 276,700-sq. ft. apartment complex that includes another 25,000 sq. ft. of open air common space. The building's 187 units can accommodate 485 beds and will feature many high-end finishes.

Nearby is Bryant-Denny Stadium, home to the Alabama Crimson Tide football team, a perennial contender for the national title. Under head coach Nick Saban, the team has won 4 NCAA championships just since 2009.

And when The Hub is finished in August 2018, students will be able to tailgate before, during and after home games on the building's expansive rooftop terrace. There, they also will be able to enjoy a swimming pool and hot tub system, gas grills and fireplaces.

Down on the podium level are multiple courtyards that feature gas fire pits, a bocce ball court and other recreational space. The Hub also features a full-size fitness room and a club-style study area.

There also are three levels of parking, with one underground and two above, as well as surface parking being built across the street.

The Hub at Tuscaloosa is being developed by Core Spaces and Up Campus Properties, companies that specialize in acquiring, building and managing high-end buildings in campus communities. The firms are located in Chicago, Ill.

Core & Up Campus brought on Tuscaloosa-based Amason & Associates as the general contractor on The Hub and its crews started work on the site in early February.

Bill Plott and Chandler Gann are both young project managers on the venture for Amason. Plott said the 18-month design-build project is slated to be finished by Aug. 1, 2018.

He also said he is continually impressed by everything The Hub will be able to offer students.

“If you ask me, The Hub is one of the most amazing student housing complexes I have ever seen, with a rooftop swimming pool and maybe a dozen or so VIP units with hot tubs on the personal balconies,” he marveled. “We will be building the first elevated pool system in Tuscaloosa on this job and one of the very few in Alabama.”

He added that as his crews add each floor of the structure, they will use a solid steel core to support the pool. A wood frame will then wrap around the steel core.

Plott said the contract for building The Hub exceeds $33 million.

Prior to any earthmoving on the site, Amason contracted with Price Construction in Tuscaloosa to demolish several brick apartments and two wood houses, a two-week process.

Then, the heavy equipment came in to begin the task of digging the foundation for the apartment building. For that, Amason used the services of two Alabama firms.

The earthmoving was done by Dominion Construction in Tuscaloosa, while the foundation work was performed by Birmingham's Russo Corporation, a 60-year-old company that is a leader in foundation and site work throughout the Southeast and as far west as New Mexico.

According to Plott, Dominion used two excavators, a Komatsu PC360 and a John Deere 390G-LC to grade and dig the site.

“During most of the excavation we were running 95 to 110 dump trucks in and out of there every day,” he said. “The most we ran on one day was 130 trucks, which was impressive because we are working right in the heart of the campus and it was before the students were out for summer break.”

The work site is tight, with other multi-story buildings around it, and traffic was often heavy. To help make the area safer for students and their vehicles, Plott said they put up many Yodock-brand water-filled barriers around the site.

One of the bigger challenges Amason and its subcontractors faced in beginning The Hub project was designing the foundation, a complicated task that took weeks to plan and coordinate before any dirt was moved.

“We had to do a great deal of front-end work with Russo to get that right before construction,” Plott said. “Really, it was figuring out how we were going to hold back the earth, because we were near the limits of what you can do with cantilevering and H-pile. The depth of the excavation caused us to get real close to that limit and we weren't sure if we would have to use tiebacks on the inside, which we wanted to avoid.”

But after consulting with the design-build team of architects and engineers, Plott said that crews beefed up the foundation's supports without having to use any internal or external tiebacks.

Excavators then removed about 34,000 cu. yds. of dirt for the foundation and first level and a half of the underground parking garage.

“After that was done, Russo moved in to do the shoring and drilled H-piles with timber lagging down about 16 feet,” he said. “Once we got down to the bottom, we had anywhere from a 15- to 30-foot depth where we then installed 24- to 60-inch diameter concrete drill shafts as deep foundations for this job.”

Russo utilized three different augers, or drill bits, for drilling the shafts. The contractor used them interchangeably on the end of a Komatsu PC300 excavator to do the job. The same machine also drove the H-piles, as well.

Challenges Met on the Job

Besides having to guard against the soil pressure in the pit, crews digging the foundation also had little room in which to maneuver.

The building team did not want to have to dig down any farther for the footings, so after some input from an engineer and the concrete contractor, MSE Building Co. out of Birmingham, they arrived at a solution.

“We welded these long steel anchor rods — studs as they were calling them — all the way up the I-beam,” Plott said. “Now, instead of having a footing for the retaining wall, the retaining wall actually pours to the lagging in the soldier beams and the studs tie that wall together. That allowed us to eliminate all perimeter concrete footings.”

Nichols Concrete in nearby Alabaster, Ala., used a Schwing 61-m pump to move 250 yds. of concrete into the foundation on one recent summer day, Gann said. While the columns and retaining walls have all been pumped through the cranes, all the elevated concrete slabs will be done by pump trucks.

“Each of the two basement parking levels and the first and second floors will be concrete slabs and from the podium level, everything is built up with a wood frame,” he explained.

Amason subcontracted the underground utility work to other local companies, including Tuscaloosa's Premier Service Co. to install the high-voltage conduits, with the assistance of Alabama Power. Dominion Construction has put in the storm and sanitary lines, as well.

Amason is currently lining up other firms to do the water main, gas line and fire main, Plott said.

Early in the process, Plott and Gann discovered that one piece of equipment was indispensable to a project such as this.

Maxim Crane Works in Birmingham rented the builders a huge Terex Hammerhead SK-315, an older model 300-ton tower crane. From the cab, the crane reaches 141 ft. at its highest point.

With its size in mind, Plott, Gann and their team figured a way to safely and effectively move the tower crane onto the project's footprint.

First, the overhead power lines at the site were removed and placed underground.

After using the crane to move bucket after bucket of concrete into the foundation, the machine's next task will be to help shape the complex as the work moves higher and higher.

Amason's plan calls for the Terex Hammerhead to literally be right in the middle of the construction.

“This building, luckily, has a U-shape on the north side where there is a courtyard, so once you get past the second-floor podium, it is all open air,” Plott said. “That means we can use this crane within that space. We worked out the crane's radius and saw that we could safely use it as the building is going up around it. Then when the crane is done we can remove it and do the finishing work on the courtyard.”

Gann said the project could not be done properly and on time without the Hammerhead.

Plott agreed and added “We have come to realize that a tower crane makes your job run a lot faster. A crawler crane simply can't maneuver around and pick up a generator or tool bag or a 7,000-pound slab of concrete. Without the Terex, we would be way behind.”

Time Is the Final Challenge

Heavy rains recently slowed the progress of the job, said Gann. He added that the site was graded so that rainfall would slope to the middle and drain toward the elevator pit. Soil at the bottom of the 16-foot foundation is very sandy and generally just soaks up the rainfall without any problem.

After the recent storm, however, sump pumps were needed to get all the excess water out as the deluge was more than could be drained normally.

“As of right now, our concrete guys are working Saturdays to stay on schedule because of the rain,” Plott said in late June. “MSE is very professional and a very good sub to work with so we have all the faith in the world that they are going to put us to where we need to be.”

The weather is just one element that had to be factored into the timeline for getting a project like this completed on a major college campus in a relatively short period of time.

“The biggest challenge —one that trumps all others — is the schedule we are faced with,” admitted Plott. “From the day we started excavation to when it opens is 18 months. For an apartment building of this size, with a lot of high-end finishes, the schedule is definitely our biggest issue.”

But, he added, Amason is filled with “an energetic group of people” who enjoy meeting the challenges head on.

He said there is a good mix of young people, like himself and Gann; as well as superintendents with a wealth of experience, like Gary Beane and John Burroughs, both of whom are working on the construction of the student-housing complex.

Despite the time challenge, he feels confident that when students start the fall semester at Alabama in August 2018, The Hub will be open and waiting for them.