Safety at the Heart of Road, Bridge Construction on I-85 Near Opelika, Ala. 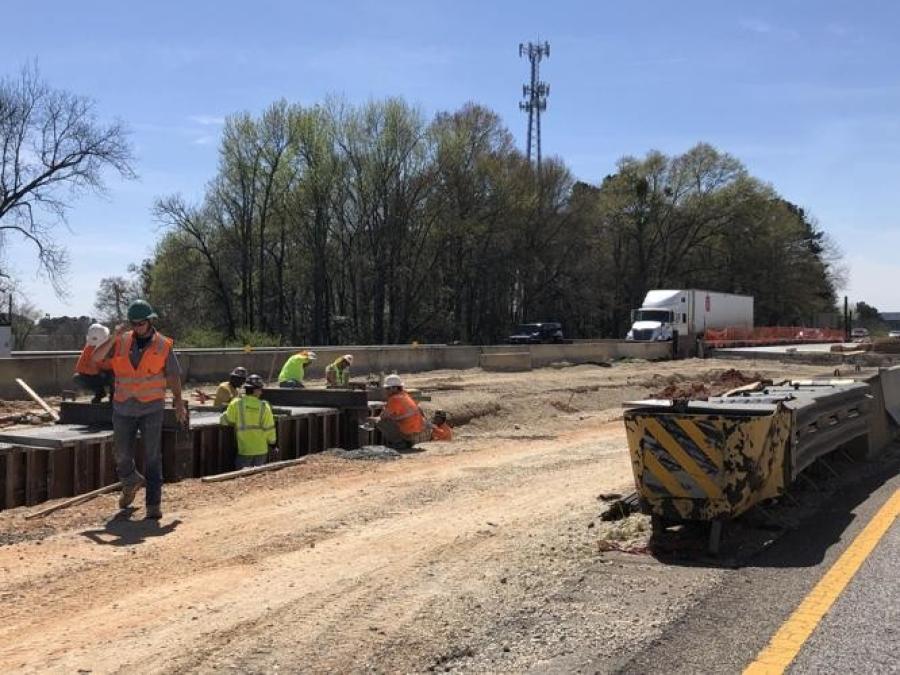 Lee County Sheriff Jay Jones reminds drivers to be cautious and to slow down while driving through the construction on Interstate 85, especially while workers are on site. (Lauren Johnson/Opelika-Auburn news photo)

The construction of the $32 million bridge replacement project on Interstate 85 at Exit 60 near Opelika, Ala., is expected to last for two more years.

Crews with McInnis Construction LLC of Summerdale, Ala., have worked to replace the six "functionally obsolete" bridges at the I-85 exit since last April.

The Alabama Department of Transportation (ALDOT) estimates the project to be finished by the spring of 2024.

During the bridge construction, ALDOT has been able to allow for two travel lanes in both directions by using the existing median as a temporary travel lane for drivers.

"The bridges over Long Street, the Norfolk Southern Railroad and AL Highway 51 [Marvyn Parkway] are considered functionally obsolete and are being replaced with new, modern bridges that have full width shoulders of approximately eight feet for added safety and traffic congestion relief," Kirk wrote to the Opelika-Auburn News in an email.

Motorists Need to Be Safety-Conscious

Lee County Sheriff Jay Jones said it is "critical" that drivers reduce their speed while traveling through the construction corridor — both for their own safety and for the safety of construction workers.

The speed limit through the area has been adjusted and reduced by ALDOT, as low as 45 mph, and markers also have been placed to warn approaching drivers how close they are to the work zone.

Jones said his deputies will pull over traffic violators, but they are not specifically assigned to the construction site. Instead, Alabama State Troopers are the primary law enforcement on site reminding motorists to slow down.

In the last several years, Jones said there have been a "significant number" of accidents between exits 58 and 62 where the area's two major routes, I-85 and U.S. Highway 280, are found.

After the bridge is completed, the transportation agency plans to widen the road, creating three lanes on each side of the interstate to help improve the congestion and prevent future accidents.

"I believe that having that additional road space there will help to mitigate the congestion that is currently in place," Jones explained.

Opelika Mayor Gary Fuller stressed that the reason the project was undertaken in the first place was to provide a higher measure of protection for drivers.

"The most important thing is it improves safety for motorists traveling that section of I-85," he explained. "In my opinion, it is the most dangerous interchange on all of I-85 [in Alabama due to there not being] much room to get on or off because of the bridges that are there."

Fuller said it is important to remember that I-85 between Exit 58 and Exit 62 also shares the highway with U.S. 280 traffic, making the volume of traffic much greater on that stretch of the freeway.

A news release from ALDOT noted that the project also will extend acceleration lanes from Exit 60 to allow traffic to merge onto I-85 more safely.

Kirk said the project has been funded by federal and state funds, including a $10.8 million grant that ALDOT received from the USDOT Competitive Highway Bridge Program.

Alabama was one of 18 states to receive the grant, which was received in 2019 for the purpose of modernizing the state's interstate system to better handle high traffic volume.