San Francisco's $4.5B Transit Center on 'The Right Track'

The new center is priced at $4.5 billion. 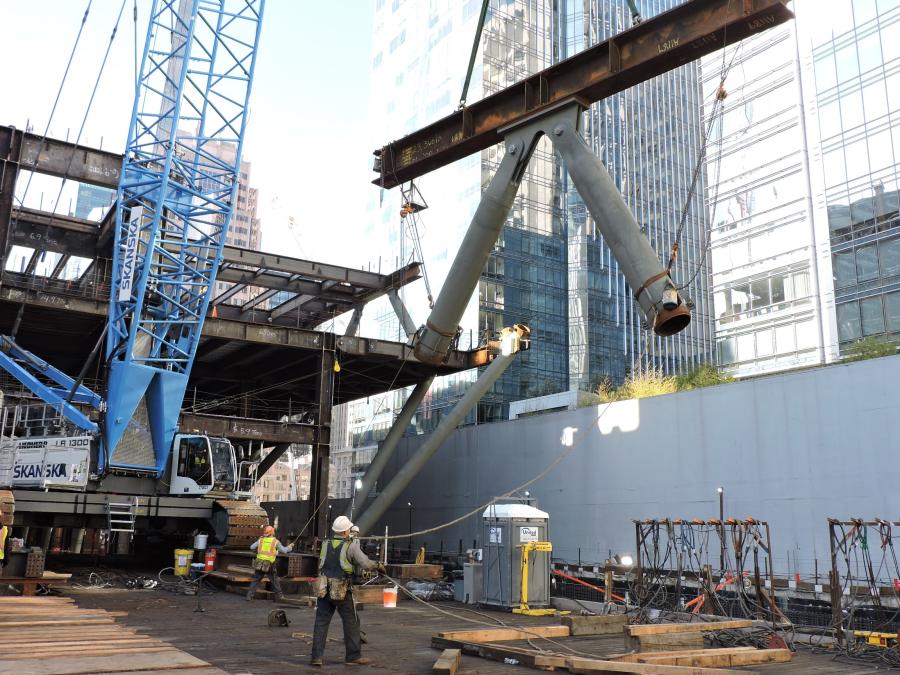 “We are currently under construction with Phase I,” said Dennis Turchon, senior construction manager with the Transbay Joint Powers Authority. “It is being built in the footprint of the old terminal.”

The new center is priced at $4.5 billion. It includes a new transit-oriented housing and business district. Considering the magnitude of the project, the center is already being referred to by some as “Grand Central Station of the West.” Completion of Phase I, which includes the new transit center, is set for late 2017. That goal is still on track, Turchon said.

The second and final phase includes construction of a 1.5 mi. (2.4 km) downtown rail extension. Second phase construction will start once full funding for the second-phase work is available.

In 2014, the first steel sections went up and the work continues with the use of two huge cranes designed to work in tight spaces.

“Work is being done from the ground up,” Turchon said.

The center will be located just south of Mission Street, extending from Second Street to Beale Street. It is designed as a regional transportation hub spanning more than 1 million sq. ft. (92,903 sq m).

But it also is a place to enjoy sights and sounds while waiting for a bus or train.

It will include a 5.4-acre rooftop public park that includes an open-air amphitheater, gardens, trails, a half-mile jogging track, open grass areas children's play space, restaurant and café. It will feature pedestrian bridges that connect the Transit Center's rooftop park to surrounding developments and shopping areas.

“South of Market [Street], there is very little open space,” Turchon said. “So a park is a huge upgrade.”

The transit center will be well lit with what is called a light column that allows natural daylight into the building. The center will feature a grand hall, a ground-level floor with an open-air main entrance off Mission Street. It will include an information center, ticket kiosks, automated ticketing and the main escalators.

Project officials selected Pelli Clarke Pelli Architects based in New Haven, Conn., as the architect for the Transit Center through a juried completion. Project construction manager and general contractor is a joint venture of Webcor Builders of San Francisco and Obayashi Corp., of Burlingame, Calif.

Steel and Concrete are Being Installed

Workers are pouring concrete and installing structural steel. The steel structure should be finished by mid-2016. Approximately 24,000 tons (21,772 t) of structural steel will be installed.

Workers from a variety of trades are installing windows, drywall and electrical lines. The number of workers on site during the day has grown to 500 from 120.

Along with installing structural steel, crews are installing concrete and rebar for slabs and structures. Concrete pouring for walls and decks of the transit center required First Street lane closures between Mission and Howard streets during nighttime hours throughout November.

The concrete is sourced strictly from the West Coast, Turchon said.

Critical to erecting large amounts of structural steel is the huge Liebherr LR1300 SX crawler crane. Two of the cranes are in use by Skanska USA, headquartered in New York.

“The subcontractor brought in structural steel plate from the East Coast,” Turchon said.

Prior to the concrete and steel construction, crews had to remove a huge amount of dirt. They removed soil from nearly four city blocks over a little more than two years.

Excavation began in December 2011 and concluded in February 2014.

Workers removed more than 640,000 cu. yds. (489,315 cu m) of dirt from the site during excavation. Nearly all of the excavated soil was sold as quality sand for reuse on other construction projects.

The workers also pulled out more than 2,000 40 ft. (12 m) long Douglas fir timber piles that were installed in the 1930s.The timber piles were recycled for use as architectural components in new buildings.

The Transbay Transit Center replaces the former Transbay Terminal built in 1939 at First and Mission streets. The terminal was built for East Bay trains using the newly-opened Bay Bridge. Later it was turned into a bus-only facility.

A temporary terminal will serve as a replacement for the bus facility while the new Transbay Transit Center is being built.

Workers have demolished the former Transbay Terminal building and bus ramp and relocated utilities in the project area. Nearly all the concrete from the Transbay Terminal demolition was crushed and recycled. The demolition signaled the end of limited transit and movement into an era of many transit choices.

Today the need is for a multi-connection center for various trains and buses.

The new center is part of a Transbay Transit Program, which links transportation and housing in the downtown area. The center sits in the heart of a new transit-friendly neighborhood.

The Caltrain rail extension is designed to accommodate California's high speed rail. The program includes a redevelopment project that will transform parking lots and public parcels of land into a new San Francisco neighborhood centrally located downtown next to the waterfront, the Transbay Transit Center, the Financial District and the historic district west of First Street.

The project will feature 2,600 new homes, 35 percent of which will be permanently affordable. Folsom Street will be developed as the centerpiece of the housing development with widened sidewalks, cafes, markets and views of the San Francisco Bay.

Program planners believe it is time for public infrastructure to meet the needs of the 21st century. That means centralizing a fractured regional transportation network, making transit connections between all points in the Bay area faster and more convenient.

The Transbay Transit Center project is being constructed in two phases. The first phase, set for completion in 2017, includes construction of the above-ground portion of the new transit center, the below-grade rail levels in the transit center and the bus ramp connecting the center to the San Francisco-Oakland Bay Bridge.

The $1.2 billion first phase is funded through local, regional, state and federal sources.

At the completion of the Transbay Transit Program, the transit center is expected to accommodate more than 100,000 passengers each weekday and as many as 45 million people per year.

The new transit center will make public transit a convenient option, allowing people to travel and commute without the need for a car. That will result in decreased road congestion and air pollution.

Use of the center is expected to remove more than 8,000 daily auto trips from the peninsula corridor roadways, reducing traffic congestion on Highway 101 and Interstate 280.

Also, planners estimate that more than 125,000 jobs will be created from the construction of the transit center and the downtown rail extension. The transit center is expected to create 27,000 permanent jobs including the operation and maintenance of the center.

Roads will not be widened in the project area, but pedestrians will notice a lot more sidewalks.

“There will be more room for pedestrians,” Turchon said.

“We always had a role of being a very good neighbor,” Turchon said.

To help keep traffic flowing weekend work was scheduled on long weekends, temporary bridges were installed over work taking place below ground level and half of the road closures are done at night.

“One lane is closed on Beale Street to allow room for a crane,” Turchon said. “A 10-day notice is given before closing a road is closed.”