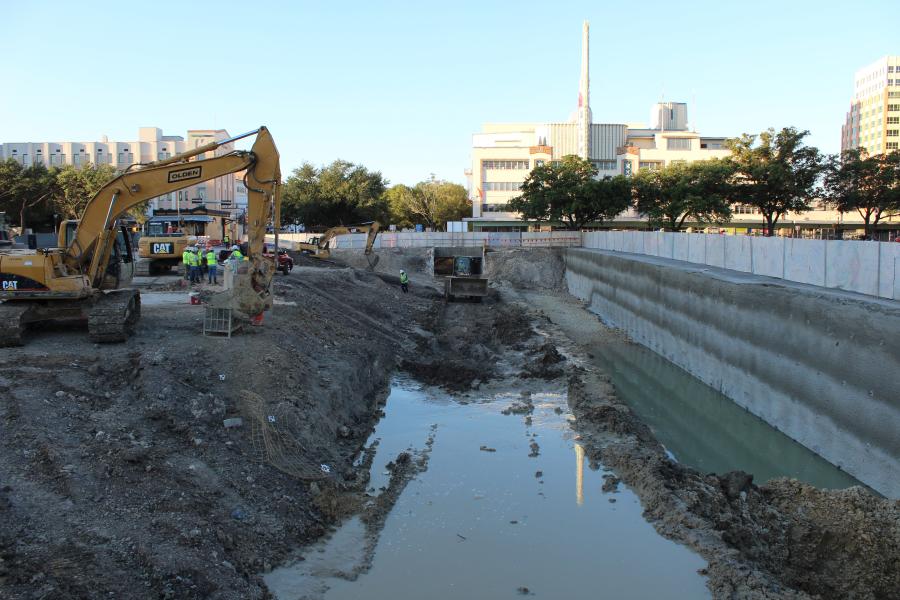 Bexar County has pledged a total of $125 million to fund the design of all four phases of the San Pedro Creek Project, as well as the construction of Phases I and II.

As they work to transform San Pedro Creek from a neglected drainage ditch into a natural creek habitat and world-class linear park, construction crews in San Antonio, Texas, are ultimately preserving the creek's legacy as an integral part of the city's history. The highly-anticipated project will be built in multiple stages, with a goal of having Phase I completed in time for the city's 300th anniversary in May 2018.

“The linear park will stretch two miles through the west side of downtown, reclaiming connections to heritage and water,” said Bridget Hinze Weber, administrator, San Antonio River Authority. “From the Christopher Columbus Italian Society to the Alameda Theater to Ruby City, the creek is anchored throughout by key cultural entities. Building upon these resources and strengthening cultural communities creates an economic asset ripe for growth and revitalization.”

Bexar County has pledged a total of $125 million to fund the design of all four phases, as well as the construction of Phases I and II. The work will improve the creek's function in flood control, while assisting natural habitat and water quality and allowing for new development. Weber said teamwork has been essential.

“Bexar County's collaboration with the San Antonio River Authority and the city of San Antonio illustrates that public investments can create multiple benefits, from quality of life to connectivity to revitalization. The project will replace the diminished industrial ditch with a vibrant public space, while better managing storm water and improving water quality.”

Often overshadowed by the San Antonio River and its world-renowned Paseo del Rio, the creek has earned its place in San Antonio's historical timeline. For years, it helped sustained the civil settlement and growth of the city.

“San Pedro Creek is the origin of the San Antonio community, as the Spanish first settled on the creek, not the San Antonio River,” said Weber. “For nearly three centuries, many people and cultures have co-existed along the creek, playing a vital role in San Antonio's history. Revitalizing this natural gem where our roots began will be the centerpiece for downtown economic revitalization.”

San Pedro Creek receives runoff from a watershed that spans approximately 45.6 sq. mi. stretching from just north of the intersection of Fredericksburg and Wurzbach Roads to the confluence with the San Antonio River just south of Probandt Street.

The San Pedro Creek Improvements Project begins at IH-35 at the flood tunnel inlet at Santa Rosa Street, near Fox Tech High School, and ends at the confluence of the Alazán and Apache Creeks at IH-35 to the south. The total length of the improvement area is 2.2. mi.

The project calls for 60,000 linear ft. of new walls, new pedestrian bridges and 11 acres of landscaping. Weber noted that strong local support and funding availability are two key reasons now is an ideal time to carry out the work.

“This is first and foremost a flood control project, removing 30 acres from the 100-year floodplain in downtown, so it is crucial to advance the protection of our city. The community has been behind this project since its inception. We have a very active citizen stakeholder committee that meets monthly to advise governmental staff on the direction of the project. This process ensures that the community's desires for the creek are being met.

“After four years of the public input process and design, we are extremely gratified and proud to see the progress of the project in construction. To see the vision for San Pedro Creek now become a reality is a great sense of accomplishment.”

The San Antonio River Authority will operate the park to ensure not only a high quality of park maintenance, but also dynamic programming experiences.

“The programming will be arts and culture focused, inviting people to reconnect with a place of great historical and cultural significance through the arts. Activation of the park will be through various types of art and programming including temporary and changing works, as well as poetry, performance, music, dance and poetry.”

Chad Yount, project manager, Sundt/Davila JV, said, “This is a world-class linear park that we have the honor of providing to the people of San Antonio. The project reconstructs eight bridges and all associated utilities. Over the last 300 years, utilities have been installed, reinstalled, abandoned in place, etc., creating a utility puzzle that has to be solved in a way to minimize impacts to traffic and utility customers.”

According to Yount, the work conditions are less than ideal.

“With the nature of working in an active creek, every time it rains the project is flooded out. We constantly have to implement temporary flood control infrastructure, and be ready to pump water at all hours of the day.”

Crews have been working on a variety of tasks, including the excavation and construction of cast in place walls, fiber and coaxial cable splicing, storm drain and low impact development infrastructure installation, stone masonry walls, historic wall stabilization and preservation, fountain pumps and piping and water and sewer relocations. Yount said the elements have not been forgiving.

The three northern bridges will be rehabilitated and artwork incorporated as part of the work, which began with an overgrown concrete-lined drainage ditch. Prior to any major activities taking place, electric and telecommunication lines had to be relocated. Surface demolition, tree removal and grass/shrubs removal also occurred.

As an existing creek, the site is saturated, and the work area constrained. Excavation requires tracked equipment.

“The project is all Class I or Class II non-hazardous material, which must be disposed of at an approved dump site,” said Yount. “In addition, all excavation six inches below the surface has to be monitored by archaeologists, due to the history of San Pedro Creek being the location that San Antonio was founded on May 5, 1718.”

A total of 55,000 cu. yds. of dirt was removed from Phase 1, segment 1, with approximately 130,000 cu. yds. transported from all Phase 1 and 2 work. The average width of the project is only 120-ft. wide. Heavy equipment being used on the job includes 330 excavators, skid steers and 930 loaders. Main materials include 3600 PSI concrete for all structural walls and 3-in. embankment.

“All the walls are radii and are integrated into each other,” said Yount. “Each wall has a different type finish, either stone veneer, tile or sandblast, which require different forming techniques.”

By deepening and widening the existing channel and replacing more than a half-dozen street bridges, the project will contain the 100-year flood plain within the San Pedro Creek banks. It's also expected to spur a $1.5 billion economic impact by creating 2,100 new housing units, 1,428 new downtown employees, 7,300 new downtown residents, a 150 percent increase in new property value and $227 million in ad valorem tax revenues.

Through the use of low-impact development features, including bioswales and aquatic plantings, the project will advance the water quality and ensure the sustainability of biotic habitats. It will celebrate the culture, history and natural qualities of the area through temporary and permanent public artworks, artistic treatments, interpretive signage, performances and interactive exhibits.

Bexar County is the primary funder of the San Pedro Creek Improvements Project, and the San Antonio River Authority is the project manager. The design team is comprised of HDR Engineering, Pape-Dawson Engineers and Muñoz and Company. The joint venture of Sundt/Davila is the designated construction manager for the project.

The city of San Antonio is a partner in the project and has contributed right-of-way land parcels adjacent to the creek. The city is expected to include partial funding through the 2017 bond.

The project design allows for water to be in the creek at all times, although the flow and level may shift due to weather. San Pedro Creek will reportedly be protected from over development, as the city of San Antonio, in coordination with the River Authority, has created design standards and guidelines for a new overlay district along the creek. This new district will ensure compatible and high-quality development along the creek and adjacent corridors to preserve the public investment.

Community involvement has played a key role in the planning, design and construction of the project. A number of workshops were held, starting in 2014, to make certain public input was incorporated into the design.

As work continues on the project, area motorists are having to deal with ongoing lane closures and road detours when traveling downtown. Most realize, however, the importance of having the first segment from the tunnel inlet to Houston Street completed by the long-awaited 300th birthday extravaganza.

“It will be a city-wide celebration, and the transformation of San Pedro Creek is a key part of that,” said Weber. “It's important to complete the first phase of the project, because San Pedro Creek was the founding site for our community, which we will be celebrating with the Tricentennial.”