ETH scientists have discovered that previous concrete samples were too small to allow a reliable statement on the condition of reinforced concrete. 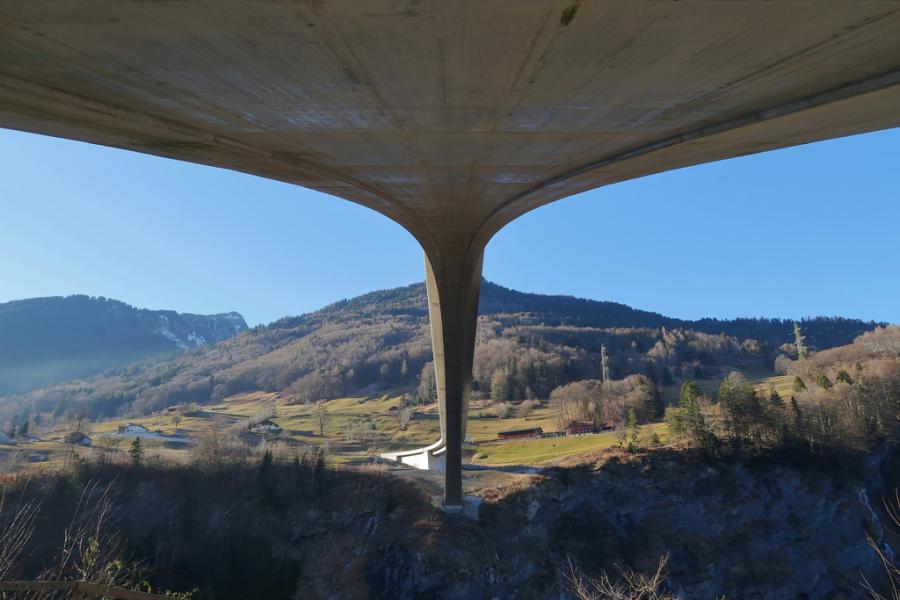 Will reinforced concrete bridges still be standing for years to come, or has corrosion already set in? ETH scientists have discovered that previous concrete samples were too small to allow a reliable statement on the condition of reinforced concrete.

Taminabrücke opened in June this year following four years of construction. At 1558 ft. (475 m), the reinforced concrete bridge is the longest arch bridge in Switzerland. This is a structure created to last numerous generations, one that will carry vehicles safely across the deep gorge between Pfäfers and Valens for decades to come. But as with any infrastructure project made from reinforced concrete, here too the ravages of time are ready to do their worst. Reinforced concrete may enable architecturally impressive structures, but as both experience and numerous worldwide studies confirm, the material is prone to harmful environmental influences, such as CO2 in the atmosphere and de-icing salt in particular. Over the years, chloride from the salt penetrates the concrete until it eventually reaches the steel reinforcement and the armoring iron begins to rust.

And the older the structure, the higher the risk that the reinforcing steel in the concrete will corrode. De-icing salt is used to keep bridges, streets and tunnels free of ice in winter, but over the years leads to a greater chloride content in concrete; the mix of cement, water and rock pieces is naturally alkaline with a high pH value that actually protects the steel inside from rust and corrosion.

"Corrosion is responsible for up to 90 percent of damage to reinforced steel structures," said Ueli Angst, professor at Switzerland's Institute for Building Materials. "And with more and more structures reaching a critical age, the annual cost of repairs in Switzerland could amount to between CHF 5 billion and CHF 20 billion." Switzerland is not the only country with this expensive problem. Most of the industrialized world is faced with similar challenges. After all, concrete is the most-used manufactured material worldwide. Some years ago in the US, it was calculated that the cost of corrosion could represent 3 to 5 percent of the country's GDP – not including indirect costs, such as congestion or loss of production.

Considering these high costs and the large number of structures in question, accurate assessment of the condition of reinforced concrete structures – including if and when repairs are required – is hugely important. Along with visual appraisal and non-destructive examination methods, extraction of concrete samples is another key process, as ETH professor Bernhard Elsener, who focuses on the corrosion and durability of building materials, explained. "The chloride concentration in the samples is calculated in the laboratory," Elsener said. "If the sample exceeds the critical threshold of 0.4 percent relative to cement weight, not just near the surface but in the deeper levels, the assumption to date has been that corrosion could soon set in and that repairs were required."

These small samples are typically about 5 to 20 centimeters, a practical size for handling in the laboratory. However, a current study by the two ETH professors shows that the conclusions drawn from examinations are incorrect in many cases. "In our research project, we examined reinforced concrete specimens of various sizes and discovered that corrosive chloride concentration was far more apparent in smaller samples and subject to larger fluctuations than in larger specimens," said Angst.

"Concrete is not a homogeneous material. The size effect of corrosion can be directly accounted for by these differences," said Angst. "Only the analysis of a larger specimen, say a meter long, will allow a realistic assessment of the condition." This is difficult for practical reasons, so the two ETH materials experts have developed a mathematical formula that allows conversion of the critical threshold in a certain specimen to any other size – thus replacing the fixed critical threshold of 0.4 percent used until now.

But the results of the ETH study do not just apply to laboratory examination of concrete samples. The findings are also relevant for the use of sensors that can be built into reinforced concrete structures to monitor corrosion. These sensors are usually small and have tended to provide overly optimistic data. For more precise forecasts, sensors of a greater size or number are in order.

The scientists believe that the only way to prevent corrosion damage entirely is to switch to expensive high-alloy steel. "This costs about ten times more than normal reinforcing steel," said Elsener, "yet when you look at the subsequent costs of regular inspections and repairs it could work out cheaper in the long run." This is particularly true when you consider the increased use of blended cements – with as-yet unknown durability properties – as a measure of reducing CO2 emissions.