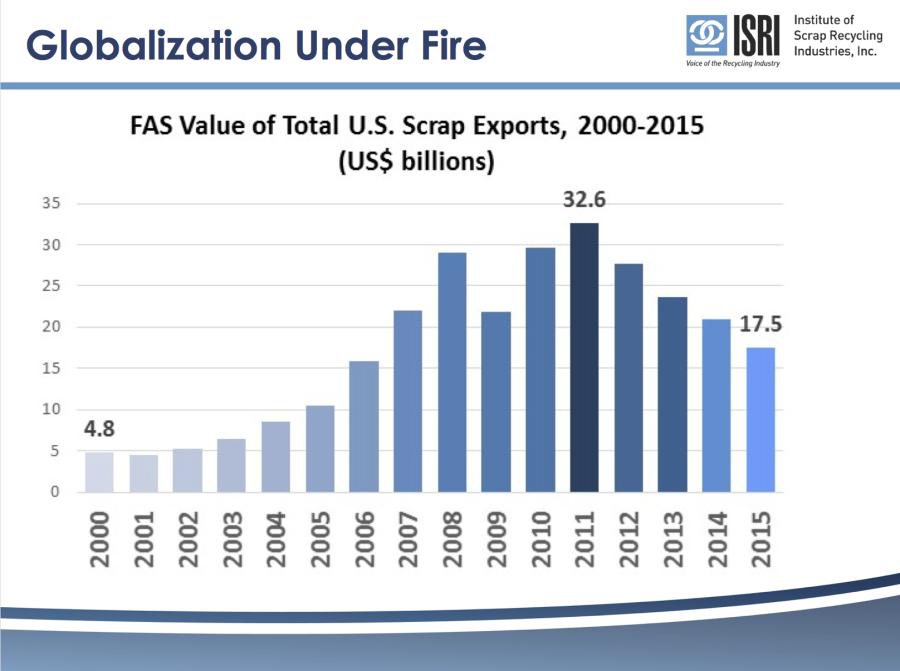 For the first time in roughly five years, scrap metal prices are on the rise, and it's a much welcome bit of good news after trend that saw some scrap metal companies shutter their businesses.

“When facing continually downward trending prices, it makes it hard to do business,” said Joe Pickard, chief economist and director of commodities of the Institute of Scrap Recycling Industries, Inc.

“Scrap processors are really in the commodity business. The year 2015 was probably the worst year our industry had faced not just in decades, but in a generation. We had been downward trending for such a long period of time, exports slowed. Exports account for 30 percent of what we process in the U.S. In 2011, exports sales were $33 billion. In 2015, exports were $17.5 billion.”

Scrap metals are classified as either ferrous, including iron and steel, and non-ferrous, such as copper and aluminum.

“Copper are among the highest unit per value, but by tonnage, ferrous scrap is the largest commodity,” Pickard said. “Typically in any year we are processing about 70 to 75 million ton just on ferrous. Ferrous tends to be a trendsetter for people in the industry. When ferrous prices go up, that tends to give a boost.”

The recent downward trend occurred because of several factors. One, was the strengthening of the U.S. dollar, which makes it difficult to price the exported scrap metal competitively. Also contributing to the lower prices was the manufacturing sector.

“Because 70 percent of scrap metal stays in the U.S., the health of the scrap industry is closely connected to health of manufacturing industry,” Pickard said. “The steel mills and other manufacturers buy our scrap. A car manufacturer stamping out car doors processes and recycles the left overs. It has been a really uneven manufacturing sector over the years. That translates into more difficult situation for scrap processors.”

There are two sources of scrap metal. There is the new metal manufacturers generate, and old scrap, such as appliances, also called obsolete scrap. When prices come down, there is less incentive for people to collect and sell old scrap metal. That means the supply starts to dry up, which is actually a step toward a more robust market, Pickard said. When demand exceeds supply, prices start to go up.

“Scrap metal is a pretty pure example of a free market,” he said. “So, fast forward to 2016, especially the second half, and we saw prices come up significantly especially toward end of the year. In the U.S., two-thirds of the steel we produce comes from scrap. The prices of other raw materials, such as iron ore and coking coal, really started to take off in 2016 and because they are substitutes for scrap, scrap prices tend to go up when other raw materials go up. Another factor was the very low inventory. There was less scrap being generated. That put upward pressure on prices as well.

“On the steel side, there have been a number of trade cases in the U.S. that have sought to curb imported steel into the U.S. and that has had a big impact. Steel imports were down 15 percent last year. And so when less steel is being imported, there is better demand for domestically produced steel. Improving domestic demand, diminished imports into the U.S., rising raw material prices and low inventories of scrap. All those things contributed to the ramp up prices.

“Another part of that equation is that when import steel came down, U.S. steelmakers started raising their prices because they could. Steel prices are still going up and scrap tends to follow those. From October to December in 2016, the price of shredded scrap went up 37 percent. And they continued to rise into January. On any given month prices have been going up $30, $40, $50 per ton per month.”

Non ferrous prices vary by metal, Pickard said. Aluminum was up by about 11 percent in 2016, while zinc was up 60 percent and copper by about 14 percent. The price of copper stayed fairly flat for much of 2016 until just after the presidential election.

“Then for better or worse, copper prices shot up 20 percent just in one week,” Pickard said. “I think a lot of the reason for that was expectations for increased infrastructure in U.S., and some of the other policy ideas debated during the election.”

The scrap metal industry is in a restructuring phase, and that makes predicting the future a little more difficult, but generally the picture looks good.

“Within the scrap industry there has been a lot of consolidation — some companies selling their assets to other companies for not operating at anywhere near maximum capacity or in some cases, closing their doors. The year 2017 is still a pretty big question mark, but I think the longer-term prospects are really good when you consider the global demand for raw material and also the increased emphasis on sustainability and the place recycling plays in the sustainable development.”— CEG