JFR Salvage Inc. recently purchased a new Atlas material handler from New Millennium Rentals, and the result is so far, so good.

Joseph Raimo, president of JFR Salvage, based in Wind Gap, Pa., said the company was running a material handler by a different manufacturer and wanted a new one.

"We started looking around and I saw this Atlas machine on the Internet," he said. "So, I reached out to Jim Gill of New Millennium Rentals. He came up here and he told us about Atlas. I felt a connection to Jim because of Napurano Iron and Metal and we had both worked scrap."

Raimo said he went with Atlas for two main reasons. 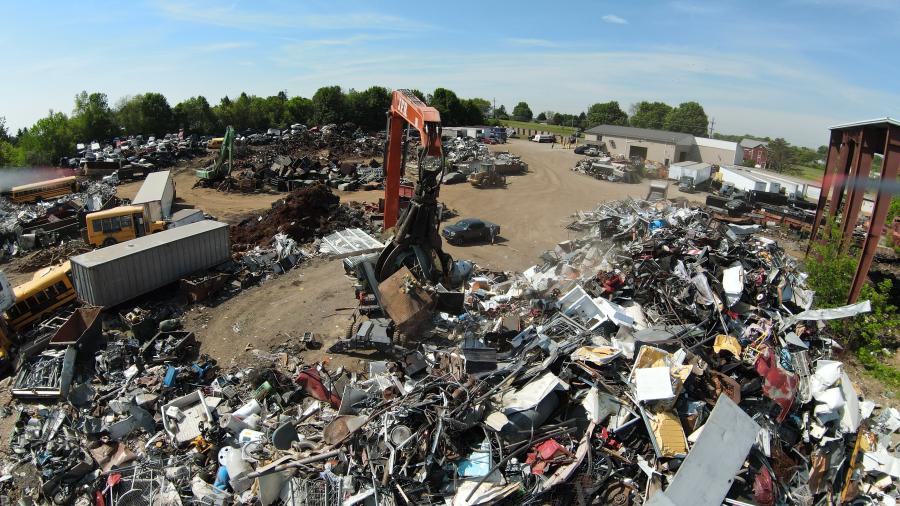 "Number one, it is always about the dollar," he said. "But it still has to be a good product, and that is where Jim came in. He was the salesman. I understand he is trying to sell me something, but I believed what he was telling me. And what he was telling me is the machine is cheaper because they don't put all the complicated stuff that other manufacturers do. And he told me it is a simpler machine. Well, I like simpler, because I am one of these guys that the more stuff you put on something, the more can go wrong."

He remembers the "olden days," with hydraulic machines. If the machine did not move, it was easy to figure out what was wrong, such as a linkage problem, clogged hose or a bad pump.

"Today, when something goes wrong, you cannot touch it," Raimo said. "They have to send somebody up here and they plug into the dashboard and read the computer and it could be the whole machine is shut down for something as stupid as a little fuse that went bad, that you cannot even replace because you do not know that. So, there is your answer. The Atlas is a simpler machine and they can sell it a little less expensively. But because it is simpler, it actually makes it a better machine, in my opinion. Now, we have had it for a few months."

He noted that Dale Houck, who has been with the company for 47 years, usually does not like change, but he likes the new Atlas machine. He said that it was not difficult to learn.

"I mean, this machine is very easy to run," Houck said. "It is a lot quicker and has more power right now. It is a good machine."

Gill noted that at New Millennium Rentals, he offers close support from a small dealer that can respond to customer's needs better.

"And that is where I come in," he said. "I have been on both sides of the fence. And it makes a difference. It really does."

Raimo noted that Gill had the price difference that was helpful, but he also knew that he wasn't dealing with a salesman who had been in sales all of his life.

"He was on the other end of this," he said. "He has had equipment. He has had battles on the phone. He has had incidences where he could not get parts and his ship has to get loaded and something (was) broken down … there was a connection and he made me feel comfortable enough about making the change. That was a good help, a good incentive."

Gill started out in the scrap business and then joined with a company in Newark, N.J., called Napurano Iron and Metal.

"They were one of the largest and most efficient scrap operators probably in the USA," he said. "And I spent close to 30 years with them and other scrap companies. They were bought by Metal Management and then bought by Sims. I was their operations manager. I was in charge of buying equipment and in charge of the whole operations. 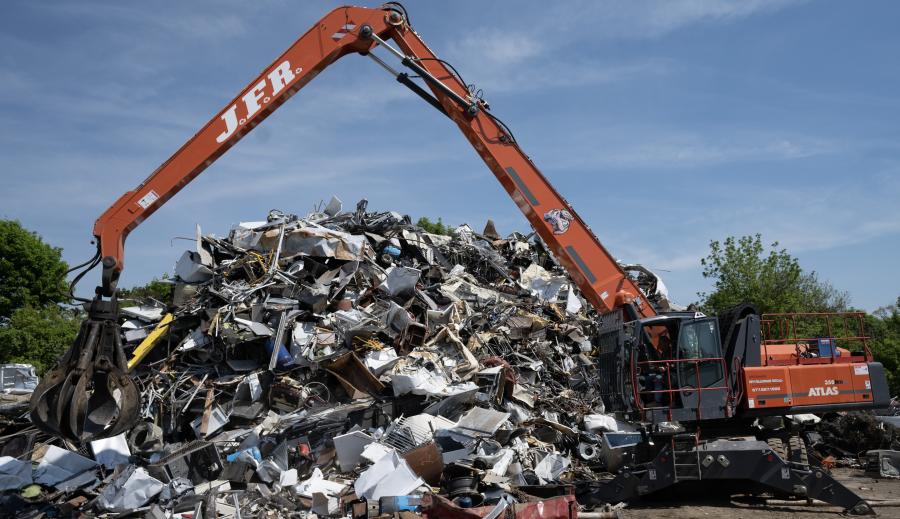 "I eventually joined up with Peter Menner, owner of New Millennium Rentals, about a year ago as a specialist helping him on his material handling line with Atlas and all of his other high-reach demolition and construction equipment," Gill said. "I used Atlas equipment years ago back in the Napurano days, so Atlas has been around a long time. Since then, we have had great success talking with different customers, selling different Atlas machines in the New Jersey, Pennsylvania and New York territories."

He added that Atlas has had really good performance machines.

"They run every day and I do not have any issues with them," Gill said. "So, I am extremely pleased with them. They are built very robustly with a simple design for the operators, and it makes it easy for them to maintain service and operate."

He noted that although Atlas has been around a long time, it was mostly in Europe, with little investment in the United States.

"Atlas was not really one of the mainstreams," he said. "So, my job is to get more people to learn and know about Atlas and to operate them and use them. Once they do, they love them. We had one customer in Jersey that has five of them and that is all he will buy now.

"They are easier to work on, they tend to put less effort into the fancy cab and the fancy design and more into basic controls and operations," he said. "And having a machine that works every single day without a problem has a lot to be said. Nowadays, with all these guys with equipment, they have gotten so technical and there are so many little glitches here and there and any time there is a glitch in the new equipment, you have to get a tech out here because you are not going to be able to fix it. It is all electric.

"I struck up a relationship with the owner of the company and I am from the old school and we knew a lot of the old operators and people and whatnot," he added. "I explained to him doing what Atlas machines had to offer. We went over the specs in detail and he was very pleased in what he saw. So, we brought the machine down here and it has been working ever since and been spotless."

He noted that machines have gotten more complicated as time went on.

"Any construction equipment has gotten more complicated over the years, and it has gone beyond the ability of the standard operator to really understand well," he said. "Even though they design it for the benefits, it gets confusing. It just does and at the end of the day, all they are looking to do is lift things up and put them down. That is all this machine does. It grabs something over here and moves it over there. That is all the operator is concerned about. So, when they over-complicate it in some of their controls and their systems, it freaks them out a little bit."

Raimo said that in many respects it is a breath of fresh air dealing with Peter Menner, Jim Gill and New Millennium Rentals.

"It is a small group of guys that just understand what it means to be good to a customer," he said.

Raimo spoke about the history of JFR Salvage. He said he started out baling newspaper and sorting metal, but did everything at the business.

"In those days, my dad was in the office and I was out there, so I was the torch man," he said. "I was the bailer, I was the greaser, I was the mechanic. I was running the equipment, whatever. And then my son, when he came along, he did the same thing. He broke in as a laborer, then a greaser, then an operator. He actually passed away … that is why he is not here."

He spoke about a time that they made their own guillotine shears because of the money involved. In 1973 in Easton, they had a Logan shear that was $550,000.

"Well, my dad came up here and we bought two scrap IBS and he welded together a head," Raimo said. "We took pistons out of an old crane that broke and used the two pistons. So, what would happen is you would lay the pipe we were cutting down on a long table and this was all fabricated welded. And then we would use our forklift, our loader with the fork in the pipe moving the pipe ahead."

He added that this was all automatic on the regular machines.

"When we opened JFR Salvage, the entire industry was using cable cranes," he added. "My dad was the first one to put magnets and grapples on all of our hydraulic excavators, eliminating the dangerous cables and having a machine that anybody could run. The cable machines were very dangerous and you needed a highly experienced operator. When I hired Dale Houck 47 years ago, he had never run a machine in his life. That was the birth of the material handler and once other people saw what we were doing, it caught on."

"And Dale [Houck], who was out there for 47 years, as he would move the pipe ahead, somebody sitting in the crane would push the lever, the head would come down, cut the pipe off, go back up, push it and that is how we made our own shear. It cost us about $20,000 … I mean he was an innovator. I will give all that credit to my old man. I did not think of any of that stuff."

He said that safety was always a concern with his father, as it still is with him.

"I tell people — new people when they start here — we do not want anybody getting hurt," he said. "Yeah, it is nice to be fast, but do not go fast if you are going to jeopardize your safety." 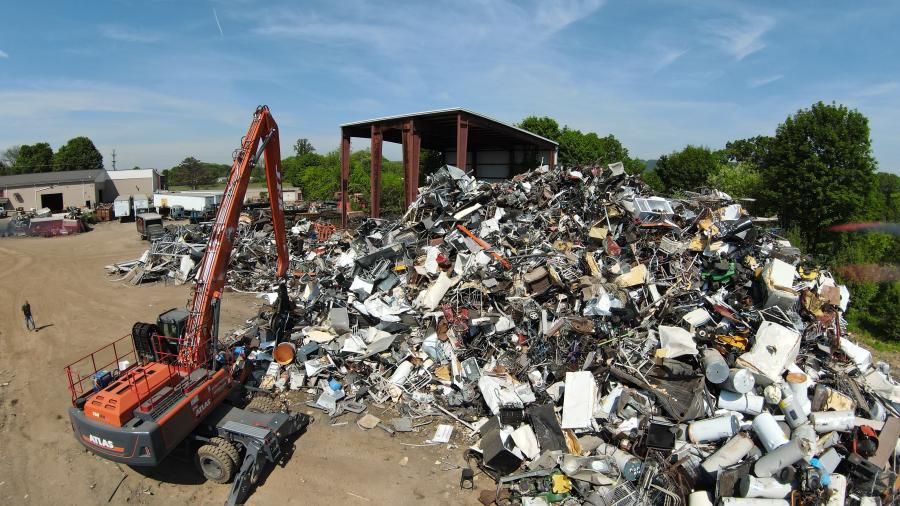 Today, Raimo said that 30 to 40 percent of his business is industrial accounts, where containers are placed for pickup.

"But 60 percent of our business is what we call peddler trade," he said. "Your margins are much greater when you deal with the peddlers. And, the peddlers, you know, are just people wanting to make a living. And people that embrace that end of the business do extremely well. Big corporations do not treat the peddlers with any degree of respect … Well, here those people are embraced and loved and respected and they love that treatment and they deserve it. I mean they are people feeding me, putting food on my table."

He is thankful to have customers who have been coming back for 47 years.

"We grew up together here and they are still coming," he said. "Now, what does that say? Obviously, if they got screwed over they would not be here anymore. I got a loyal customer base."

And Gill is pleased to have a customer returning to him and New Millennium Rentals, as well.

"Now we have a strong and reliable relationship with a great JFR Salvage with New Millennium Rentals and the Atlas material handling line," he said.