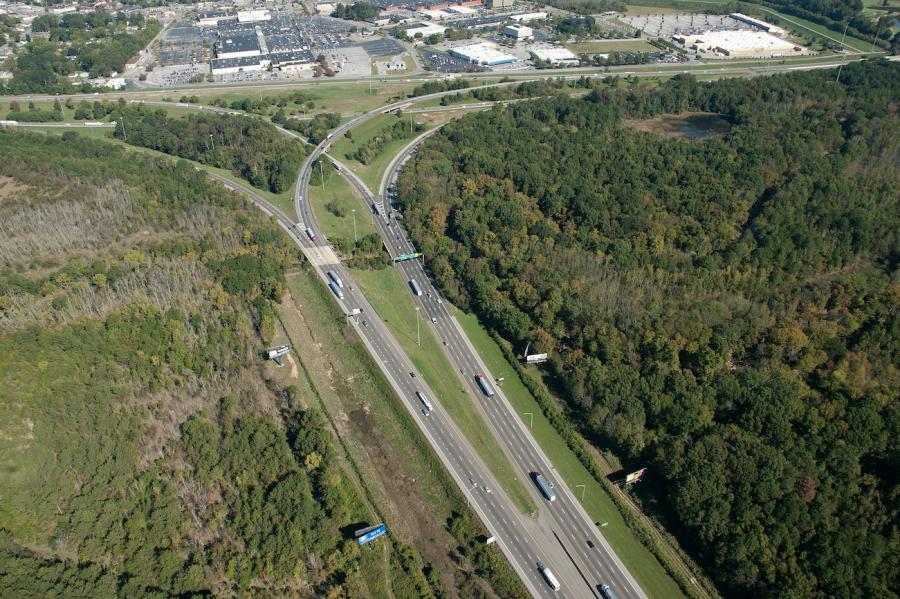 Just when commuters were thinking their driving headaches were ending, officials with the Tennessee Department of Transportation (TDOT) said the I-75/I-24 Split will remain a bottleneck until additional lanes contained in Phase 2 of the project are done in the years to come. (TDOT photo)

The initial phase of the now-$133.5 million improvement project at the infamous Interstate 75/Interstate 24 "Split" near the Tennessee-Georgia state line was officially completed on Aug. 19, but it has not answered all the interchange's problems yet.

Traffic flow through the interchange southeast of Chattanooga is improved in most directions, but the ramp from northbound I-75 to westbound I-24 near East Ridge's Exit 1 still narrows from two lanes into one, which has been the situation throughout the six-decade life of the interchange.

So just when commuters were thinking their driving headaches were ending, officials with the Tennessee Department of Transportation (TDOT) said the I-75/I-24 Split will remain a bottleneck until additional lanes contained in Phase 2 of the project are done in the years to come. The reason is obvious to drivers heading west on I-24 under the new Spring Creek Road bridges: There's nowhere for additional lanes to go.

As Phase 2 will not start until spring 2023, according to TDOT, the backup on I-75 northbound will linger for a while longer. Likewise, rush-hour backups on the southbound I-75 ramp to westbound I-24 also will not be fully addressed until a third lane is added in the next round of construction.

That is disappointing for daily commuters like Chattanooga resident John Daly, who drives to work in Dalton, Ga. Heading north doubles his trouble, he said.

"I drive it every day," he told the Times Free Press. "It's twice as long coming back home from Dalton as it is getting there in the morning. [It is] very frustrating after all the new construction to [still] end up with a tight bottleneck."

Ben Partin, of Tullahoma, Tenn., drives to Georgia via Chattanooga several times a year and is always wary of the construction. He noted that on numerous occasions he would hear tires screeching to a halt in front of him and hoping cars behind him did not rear end his vehicle as he braked.

In the past, Partin said, he sometimes dodged the construction work completely by taking a route though East Ridge.

"It takes a little longer, but it seems to be a lot easier, stress-wise, going on through the Bachman Tunnels because the traffic's not as bad as one would think on a Saturday afternoon," Partin explained.

He was glad to know most of the interstate problems were improved but added that he is leaving his detour route in place as an alternative to sitting in traffic.

The first phase of the I-75/I-24 split did not address all the problems of the interchange because the size and cost of the overall project led to the need for TDOT to break it into two parts. That was due to funding constraints and the fact that the state agency does not go into debt to fund its projects, state transportation officials told the Chattanooga Times Free Press.

"We are a pay-as-you-go state. This project was too expensive to complete under a single contract, which is why it had to be broken up into two separate projects," TDOT spokesperson Rae-Anne Bradley said recently in an email to the newspaper. "The total project's aim was to improve safety and alleviate the bottlenecking issue at the I-75 North to I-24 West ramp."

She noted that Phase 1 did improve some elements of the bottleneck.

The cost of the first part of the overall project rose from the original contract amount of $132.6 million to $133.5 million because of about $850,000 in change orders, Bradley said. She noted that TDOT has so far paid $131.7 million to C.W. Matthews Contracting Co., based in Marietta, Ga., and officials with the state agency are proud the project was "completed on time, on budget."

Bradley explained that Phase 2 work will have more impact on the bottleneck at the I-75/I-24 split.

"In the future, the I-75 North to I-24 West ramp will have three thru-lanes to I-24 westbound — meaning no merging will be required to remain on [that interstate] — and the middle lane of I-75 North will be an option lane," she said.

There also will be a total of six lanes where the two I-24 ramps meet at the Spring Creek Road bridges, Bradley noted.

"This should alleviate remaining traffic congestion now being experienced on the ramps from I-75 to I-24 West," said Bradley. "Phase 2 will also complete the widening of I-75 to the East Brainerd Road interchange."

On the eastbound side of I-24, TDOT documents show that Phase 2 will include the construction of a fourth lane that will start past the Belvoir Avenue overpass, the Moore Road on-ramp will become the fifth lane and five lanes will pass under the south end of the Spring Creek Road bridges as they approach the on-ramps for I-75 northbound and southbound.

Phase 2 has been funded for fiscal year 2022-2023 and is expected to be under contract by the end of next year, meaning drivers should see construction under way in the spring of 2023, Bradley said. She also noted that, like Phase 1, the second part of the I-75/I-24 improvement project will be constructed using the design-build alternative delivery method.

Performing the roadway improvements that way "combines all or some portions of the design and construction phases of a project — including design, regulatory permit approvals, utility relocation, and construction — into a single contract," Bradley explained to the Times Free Press. "This means the project will move forward quickly once awarded."

The interchange improvement project at the Split started in Spring 2019 in answer to decades of daily backups and crashes that often cause traffic standstills.

During a 2017 project kickoff event, then-TDOT Commissioner John Schroer called the Split "about the worst interchange in the state of Tennessee."

His statement has sadly proven to be correct, as the American Transportation Research Institute ranked Chattanooga's I-75/I-24 interchange as not only Tennessee's worst traffic bottleneck in 2021, but one of the nation's top 10 worst.