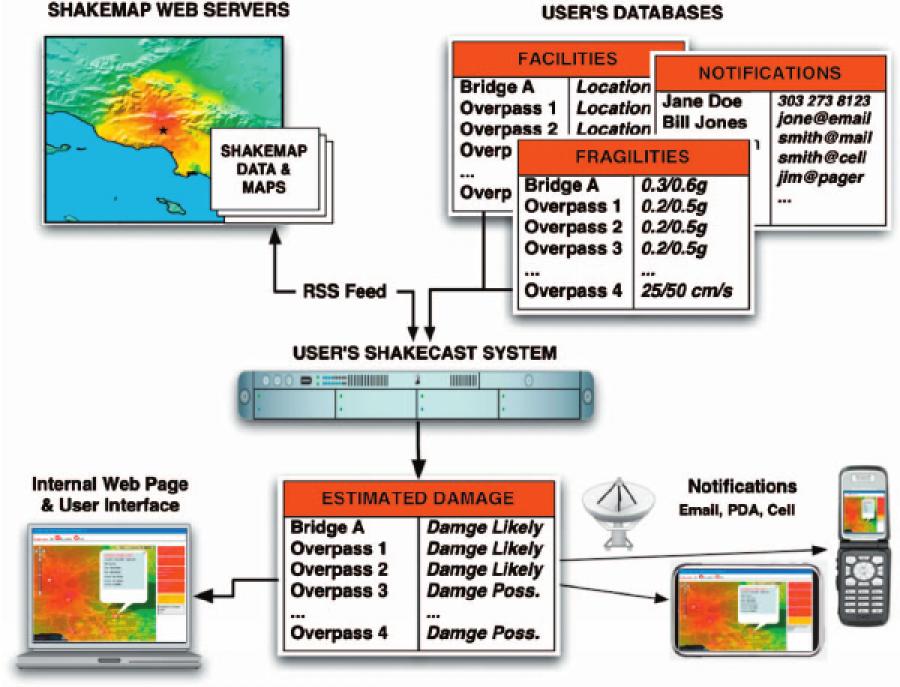 
State bridge inspectors will be able to provide a faster, more targeted response in ensuring public safety the next time an earthquake rolls across Oklahoma.

The Oklahoma Department of Transportation is now implementing the use of ShakeCast, a program created by the U.S. Geological Survey. ShakeCast is in the final stage of a two-year, two-phase, nearly $650,000 contract with Infrastructure Engineers Inc. of Edmond, Okla., to assist the department in developing an earthquake response protocol. Formalizing the plan, providing final training and an additional four years of system maintenance will conclude the contract.

The ShakeCast program will enable the nearly 300 trained ODOT employees to quickly determine which bridges to inspect first after an earthquake. If conditions warrant, key ODOT employees will receive a software-generated inspection priority order based on several factors including ODOT bridge data such as bridge condition, age and proximity to an earthquake's epicenter, combined with USGS seismic movement data and magnitude rating.

Previously ODOT visually inspected all bridges within 5 mi. of any earthquake epicenter between 4.4 to 4.7 magnitude. The inspection radius increased with the earthquake magnitudes. Generally, with a 4- to 5-magnitude earthquake no damage has been found. Going forward with ShakeCast, the inspections will identify only specific bridges susceptible to damage, allowing for a faster and more pinpointed response.

“This technology is one of the biggest advances in ensuring public safety that I've seen in my 30-year career at the department,” said Casey Shell, ODOT chief engineer. “By comparing state bridge data with the severity of an earthquake's ground motions, ShakeCast will allow us to inspect fewer bridges but with a much greater degree of confidence that we could quickly find any potential damage.”

ODOT Bridge Engineer Steve Jacobi noted that Oklahoma transportation infrastructure has withstood the increased number and severity of earthquakes since 2010 with two instances of cosmetic damage found after the 5.8-magnitude Pawnee earthquake in September 2016 and minor damage to U.S.-62 pavement after a 5.6-magnitude earthquake near Prague in 2011.

“Bridges are designed to national standards, which includes the ability to withstand vibration,” Jacobi said. “Oklahoma's bridges have weathered the increased seismicity very well, and our data shows that even our oldest state highway bridge designs are safe at the earthquake levels experienced to date. However, the department is committed to visual inspections to ensure public safety after larger magnitude earthquakes. If there is ever even the slightest question about a bridge's safety, it would be immediately closed until more thorough inspections could be completed.”

While seismic activity seems to have lessened in the state, Oklahoma's chances of earthquake-related bridge damage also are lessened thanks to the replacement of more than 900 structurally deficient bridges statewide since 2004. There remain 251 structurally deficient bridges on the state highway system and the majority of those are scheduled for replacement in the Eight-Year Construction Work Plan by the end of the decade.

ODOT has joined nine other earthquake-prone states in a pooled-fund study with the USGS to help further enhance ShakeCast. Some of the states include Texas, Missouri and California and the study information will be used to develop future versions of the software. ODOT is contributing an additional $45,000 to the USGS in a three-year period to the study.

The department has taken a lead role in developing response protocols to Oklahoma's increased earthquake activity by working closely with other state agencies such as the U.S. Army Corps of Engineers, which has 23 bridges on the state highway system. ODOT also shared its recently developed bridge inspection manual with other state agencies as well as local governments and will assist with local bridge inspections during earthquake response events as resources allow.