The move follows a series of strong recommendations from the Office of the State Fire Marshal’s Pipeline Safety Division. 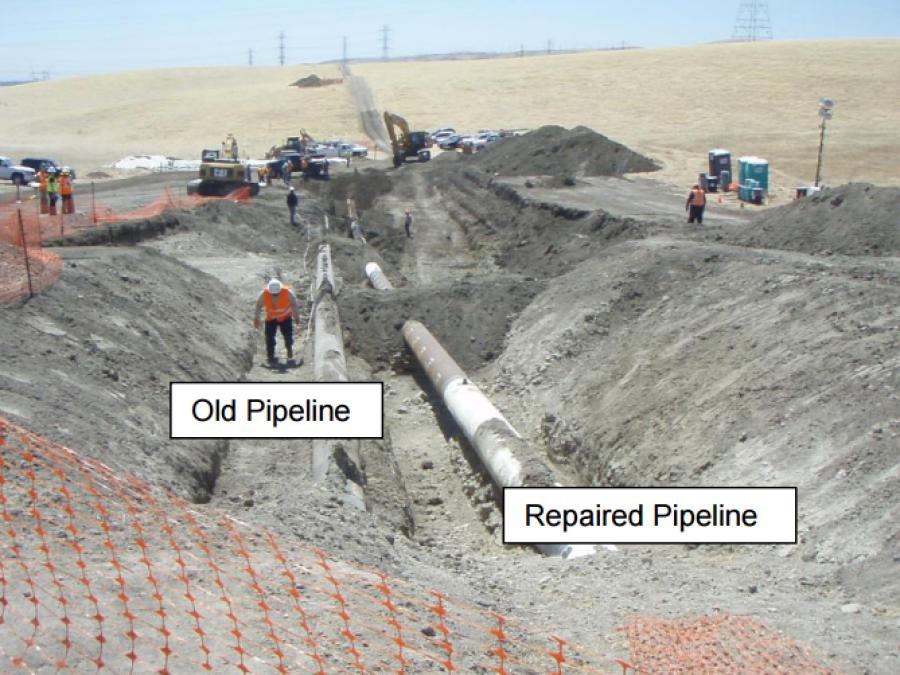 Shell Oil Co. is replacing more than 12 miles of a pipeline that carries crude petroleum from Central Valley oil fields to Bay Area refineries after an investigation into two ruptures in eastern Alameda County in 2015 and 2016.

The move follows a series of strong recommendations from the Office of the State Fire Marshal's Pipeline Safety Division, a division of Cal Fire that oversees 6,500 miles of pipelines — the first time the agency has pushed for a pipeline replacement.

The ruptures took place on Shell's 177-mile-long San Pablo Bay Pipeline, which runs up the west side of the San Joaquin Valley from Coalinga, across the southwestern edge of the Delta, and through the hills of eastern Alameda and Contra Costa counties to the company's Martinez refinery.

The spills occurred between Altamont Pass and Tracy in September 2015 and May 2016.

Investigators found both were caused by “fatigue cracks” that grew as pressure on the underground line fluctuated to deal with different grades of oil, according to documents obtained by KQED.

The two ruptures spilled a total of about 60,000 gallons on grassland near Interstate 580 and resulted in more than $6 million in damage, emergency response and cleanup costs.

Oil from the first spill seeped 10 feet into the ground. Crude from the second incident was discovered as much as 20 feet beneath the surface, according to the Central Valley Regional Water Quality Control Board. The water agency oversaw the cleanups, which involved removing nearly 16,000 tons of contaminated soil and dumping it in an Altamont Pass landfill.

After completing an investigation into the 2016 spill, the fire marshal's office placed the pipeline on its list of higher-risk lines, requiring Shell to conduct more frequent inspections.

The fire marshal is calling on the company to review all of its California pipelines that switch between different pressure levels to see if they need more frequent inspections. The state agency also wants to know whether the company can reduce the practice, known as “pressure cycling.”

Environmentalists and experts who reviewed the investigations into the breaks for KQED applauded the state for taking action but say regulators should have been more aggressive.

“We don't think that what they're recommending goes far enough,” said Patrick Sullivan, a spokesman for the Center for Biological Diversity, in an interview.

Sullivan noted the state fire marshal's office is calling for repairs along just a small portion of a pipeline that runs past several reservoirs.

After two breaks on the same pipeline in the same area, the state should slap Shell with a monetary penalty, he said

“If it triggers one leak and then triggers another one, the company needs to be held responsible in a financial way for the damage that it caused,” Sullivan said.

“I think a penalty would be warranted especially in this case where there's two failures on a pipe so close together,” Weimer said in an interview.

Dennis Mathisen, the state fire marshal, says regulators did not penalize Shell because the company did not violate any pipeline safety law.

After the September 2015 break, Shell conducted inspections using so-called smart pigs, devices that travel inside pipelines while they're still operating, instead of hydrostatic testing, where a section of pipeline is shut down and tested for leaks and weakness with high-pressure water.

“If they had done a hydrotest at that time instead of running these smart pigs they probably would have found this problem and prevented the 2016 failure,” said Weimer.

“Smart pigs didn't work out very well in this instance,” Weimer said. “Hydrotests oftentimes will find these types of failures where these smart pigs won't.”

The heavy crude the San Pablo Pipeline was transporting when it ruptured is similar to the tar sands oil the Keystone Pipeline is expected to transport, Weimer noted. That thickness could cause “cyclic fatigue” on other lines throughout California, he said, so the state should require all oil pipeline operators to conduct the hydrotesting.

“Smart pigs just aren't smart enough on some of these flaws,” Weimer said.

A month after the May 2016 oil spill, Shell says, it conducted hydrostatic testing on the pipeline — the first of its kind on the line in more than 25 years.

Shell says the two spills prompted the company to expand the range of problems it looks for when it inspects the San Pablo Pipeline and some of its other lines.

Documents obtained by KQED give a vivid picture of how the second pipeline spill unfolded.

Just after midnight on May 20, 2016, Shell's pipeline control center in Houston, Texas, detected a drop in operating pressure on the pipeline near West Patterson Pass Road and Interstate 580. At the time, it was pumping more than 6,000 barrels of heavy crude per hour, state officials said. The company says it immediately shut down the line.

Two hours later the company notified the Governor's Office of Emergency Services, several local agencies were called in to respond, and a cleanup effort began that would last for months.

“Please provide a report on this event when possible,” wrote Peter Katchmar, an accident coordinator at the federal Pipeline and Hazardous Materials Safety Administration (PHMSA) in an email to the state fire marshal's office four hours after the rupture took place.

The 24-inch pipeline released 500 barrels of oil from a break that measured 45 by 4.5 inches, according to state investigators.

As it did for the September 2015 break, Shell hired the risk management firm, Det Norske Veritas (DNV), to investigate the May 2016 spill.

DNV and Shell say the rupture was due to a “fatigue crack” that grew over time. The oil company also says that smart pig, or in-line, tests conducted on the pipeline before the break were incorrectly reported to Shell officials.

Shell says that incorrect information led them to increase pressure on the line three days before it ruptured. The oil giant blames a firm it hired to do the in-line inspections on the heels of the first break, the Rosen Group, for failing to identify and report the fatigue crack.

“Based on the … surveys confirming the absence of any actionable defects, the recommendation was made … to remove the operating pressure reductions,” Shell said in its report.

Despite the inline inspection company's mistakes that may have led to the pipeline break, Shell continues to use Rosen for in-line inspections, company spokesman Ray Fisher said in an email.

Like the first break, DNV said small pits of corrosion, along with the line's frequent changes in pressure due to the different grades of oil it carries, contributed to the rupture. The firm added that the crack could have developed when the pipe was transported to the West Coast 35 years ago.

In its report Shell said it wants to improve detecting cracks along its pipelines and take a closer look at its pipes that undergo aggressive pressure cycling.

“There needs to be corporate awareness for what pressure cycling does to the pipelines,” Shell's review said. “This action needs to lead to more discipline and visibility of the issue.”

Fisher says crude that the pipeline brings from the Central Valley to refineries in the Bay Area “varies in viscosity.”

The company has taken measures to reduce pressure cycling on the pipeline that broke as well as others in its network, he said.

State's Reliance on Private Industry to Police Itself

Critics say the state's probe into the second spill — the state's findings mirror the company's conclusions — was basically another regurgitation of the oil giant's own review.

Sullivan, of the Center for Biological Diversity, says that shows the state fire marshal isn't up to the job of overseeing pipeline safety.

“If we are letting companies police their own pipelines, we cannot be sure that they're doing a good job,” Sullivan said. “This operator is operating a very dangerous pipeline and they do not seem to have a system in place to prevent these kinds of leaks. I don't think Cal Fire's report and recommendations really changes that.”

Sullivan says Cal Fire does not have enough engineers to police the hundreds of pipelines it's responsible for watching over.

“It's impossible for them to do the kind of rigorous oversight that they should be doing,” he said, adding that the agency needs more resources.

“If they continue to take the kind of lax approach with enforcement that we've seen certainly with these two incidents, I think it's worth considering if there is another agency that could do this better.”

In May 2015, the pipeline safety division had just a handful of inspectors and engineers. A top official with the agency said then that it had been working with a minimum staff for several years.

“We have been able to bolster our pipeline safety resources significantly,” said Mathisen in an interview. “We've more than doubled our engineers on staff.”

When the San Pablo Bay Pipeline broke, the agency had five engineers who oversaw 752 intrastate pipelines, according to Mathisen. The division conducted an average of nine investigations a year for the last five years, said Cal Fire spokeswoman Janet Upton.

But, now the agency has 13 engineers and supervisors and there are plans to hire 13 more, Upton says.

Mathisen says he wants his agency to take a more active role in pipeline break investigations.

The increase in staff came as a result of legislation in response to the Refugio oil spill in Santa Barbara County that mandated more pipeline inspections and required the oil industry to put in place better leak detection systems.

“We are gaining the resources to keep up,” Mathisen said.

State regulators recently ordered another change: Companies hired by the oil industry to inspect pipelines are now required to send the results of those tests to the fire marshal's office before they are sent to the line operators.

The company recently began the process of replacing three sections of pipeline totaling 12.5 miles, company spokesman Fisher said. Each of those sections — one near Tracy, one near the Stanislaus-Merced county line, and one near Coalinga — involves pipeline that was manufactured in 1982 and then stored outside for six years before being shipped to California and installed as part of an existing pipeline.

“Shell is choosing to replace the 1982 Columbia pipe sections with newly fabricated pipe out of an abundance of caution, despite the existing pipeline having been repaired and passing subsequent hydrotests,” Fisher said.

Shell says it expects to complete construction of the new pipeline sections by 2019, he said. The company plans to shut down the line for several days when it's installed, a move that has to be worked out with the refinery companies the pipeline serves.

Shell is not disclosing the cost of the project.