Atlanta's New Stadium Ready for Business — Except That 'Pesky' Roof 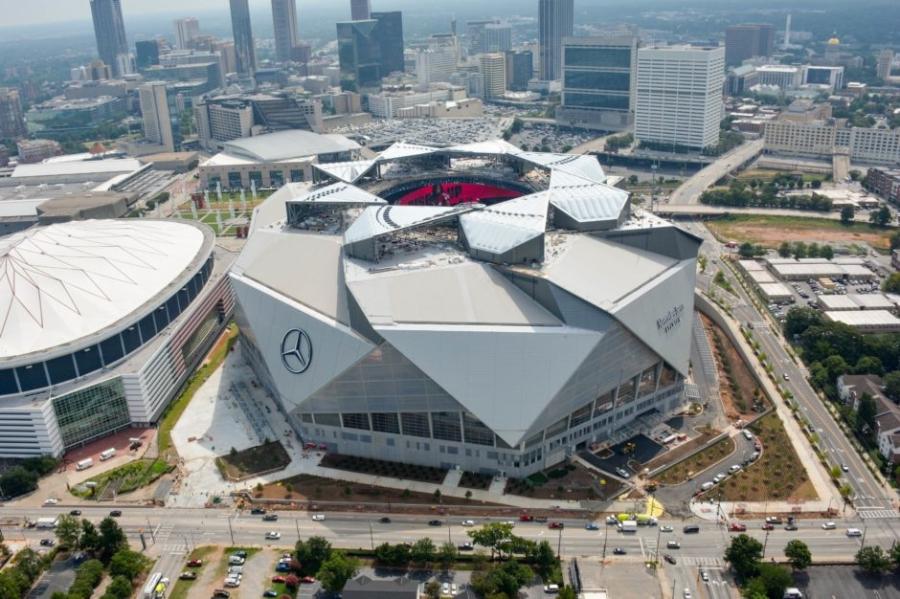 With less than two weeks to go before Atlanta’s $1.5 billion stadium hosted its first game, there was only one major issue to address.

ATLANTA (AP) The goal posts are up. The end zones are painted. The concession stands are ready to dish out all sorts of food and drink.

With less than two weeks to go before Atlanta's $1.5 billion stadium hosted its first game, there was only one major issue to address.

While vowing that Mercedes-Benz Stadium will be open to the elements at some point this fall, officials still can't put a timetable on when the elaborate roof —which resembles the cover of a camera lens — will be fully operational.

"We knew it would be complex,' said Rich McKay, president and CEO of the Atlanta Falcons. "It's probably been as complex or more than we thought. It's one of a kind. It's going to take some more work.'

The roof was closed for a media tour and that's the way it was when the stadium opened Aug. 26 with a Falcons' exhibition game against the Arizona Cardinals.

In fact, with a flurry of events kicking off the new 71,000-seat stadium, it could be weeks — perhaps even months — before the roof is fully operational.

The Falcons host another preseason game on Aug. 31, followed by two college football games over the Labor Day holiday: Alabama vs. Florida State on Sept. 2 and Georgia Tech vs. Tennessee on Sept. 4.

Atlanta United, the MLS expansion team that has drawn huge crowds in its temporary home at Georgia Tech, debuts at Mercedes-Benz Stadium on Sept. 10. A week later, the Falcons host their first home regular-season game against the Green Bay Packers in a prime-time rematch of last season's NFC championship game.

Mike Egan, a senior vice president for Falcons and United owner Arthur Blank, said engineers are still working out some bugs to ensure the roof can be opened or closed in 11 minutes.

"It's opened and closed a number of times already. We will be opening and closing it again next week,' Egan said. "It will absolutely be open for Falcons and Atlanta United games this fall.

"What we're fine-tuning is the mechanization process, and that's just the speed at which the roof opens and closes. It's really just getting the balance of the roof right, as far as these are big petals and just moving them takes a lot of energy, and getting the calibration just right to reduce the energy load on this system. But it's basically fully operable now.'

Everywhere else, the stadium looks ready for business after being delayed three times because of the ongoing roof issues.

The artificial turf field has been installed, complete with the Falcons' logos. The mammoth video board that rings the top of the stadium — 58 ft. tall and 1,100 ft. around —showed a loop of highlights from the victory that sent Atlanta to the Super Bowl for only the second time in franchise history. About the only thing left to do in the locker room is put up the players' names above each space.

Several stadium concessions doled out food during the media tour, including a chicken sandwich developed by renowned Atlanta chef Kevin Gillespie. Officials touted the vast array of beverage choices, including 1,264 taps to help serve at least 40 different brands of beer. At the Georgia Dome, the Falcons' former home which is scheduled for demolition in November, there were only 30 beer taps in the entire facility.

The new stadium, which was built right next door to the Georgia Dome, is already set to host three major events. The championship game of the College Football Playoff will be held next January, followed by the Super Bowl in 2019 and the NCAA men's Final Four in 2020.

Also, the committee that hopes to bring the 2026 World Cup to the United States, Mexico and Canada has included Mercedes-Benz Stadium on the list of facilities that could possibly host games.

"It does feel like we've run a long, long marathon. We can almost see the finish line,' McKay said. But, he quickly added, "We've got 500,000 people that are going to enter this building in the first 10 days. That marathon may be ending, but just beginning."