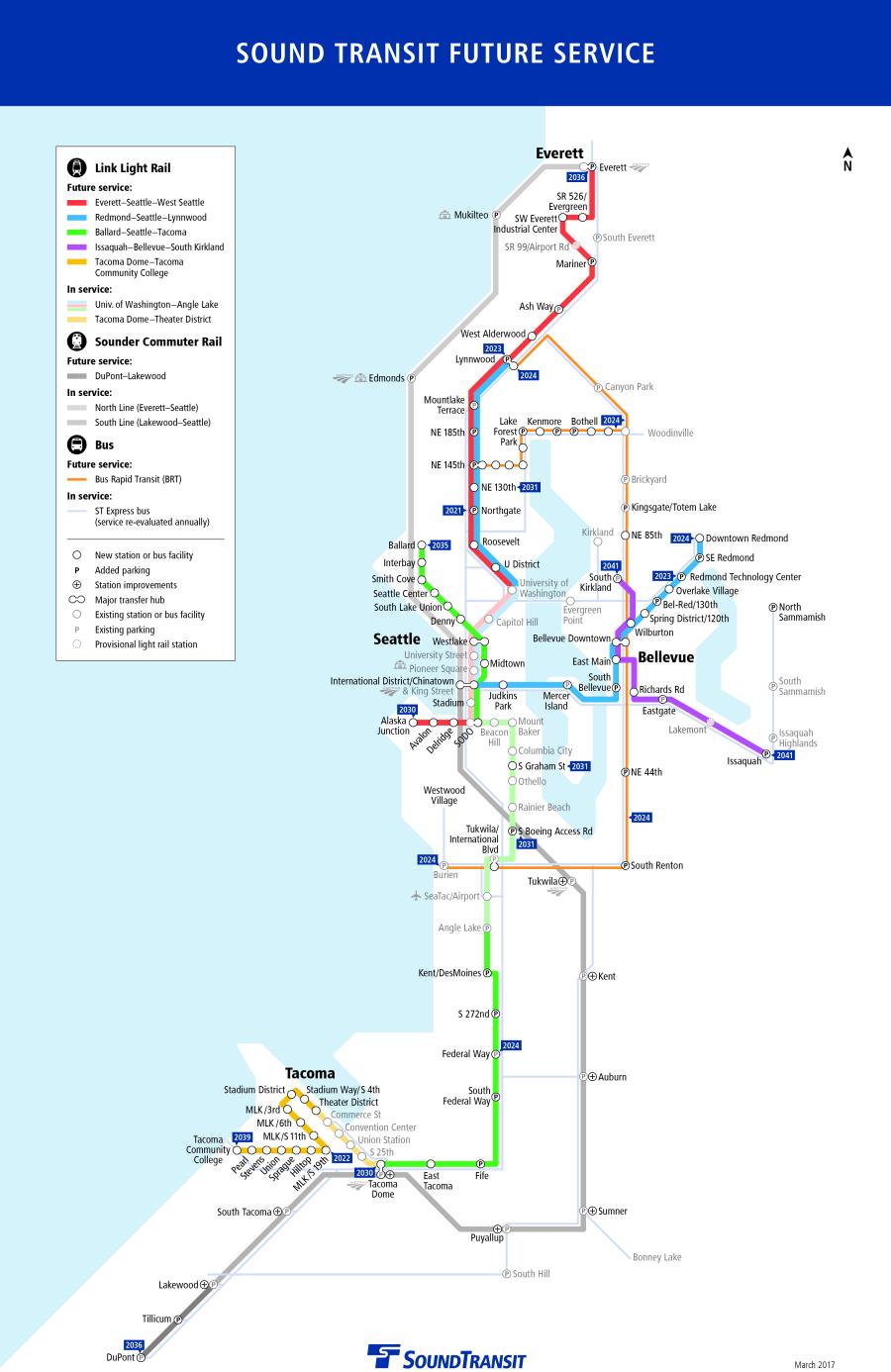 Sound Transit unveiled plans to kick off one of the most ambitious public transit capital investment programs in the nation's history. By the end of 2017, Sound Transit will be planning, designing or building 24 train and bus projects in Snohomish, King and Pierce counties.

“Today we're pushing the 'go' button on critical infrastructure expansions to serve the people of our region,” said Dave Somers, Sound Transit Board chair and Snohomish County executive. “These projects will help keep commuters, freight, and our economy moving as our population grows and our congestion worsens. It's imperative we deliver the projects voters have approved with an eye towards saving money and being as efficient as possible.”

“Sound Transit is taking its game to a whole new level,” said Sound Transit CEO Peter Rogoff. “Delivering a program of this size and complexity requires a new set of approaches and dramatically intensified collaboration with partners. Sound Transit is up for this challenge and will deliver.”

Voters approved the $54 billion, 25-year Sound Transit 3 package, which will provide an additional 62 mi. of light rail from Tacoma to Everett.

To meet the expedited timelines in the final Sound Transit 3 package, the agency will start projects sooner and collaborate with cities, stakeholders and private citizens earlier and more intensively. The greatest potential for improvements falls in the planning, environmental and permitting phases of projects. The agency will focus on identifying preferred routes and station locations earlier; streamlining the number of alternatives studied; acquiring real estate sooner; and developing early permitting plans with partner agencies.

The plan also will guide significant internal process improvements. Project teams will include all disciplines, with a focus on integrating work functions across departments, eliminating departmental hand-offs between project phases. Co-location of staff for each project in the same work space will increase efficiency.

Upcoming transit expansions will dramatically increase ridership, as previewed by the more than 80 percent growth in Link light rail ridership since Sound Transit opened its University of Washington and Angle Lake extensions last year. By 2040, overall weekday system ridership is projected to grow from 147,000 today to up to 695,000. To prepare, internal changes will increase the agency's focus on customers' experience, including everything from facility designs to technologies to signage.

The plan was developed by staff members from across the agency and informed by input from local and national transit agencies, federal and state partners, and trade organizations.

Last week Sound Transit executed the latest step toward moving forward with further expansions, issuing a request for qualifications that will help identify the consultant that later this year will support kicking off planning for light rail between West Seattle, Downtown Seattle and Ballard. This summer and fall, the agency also will solicit bids to begin planning for the Federal Way-Tacoma light rail extension, bus rapid transit projects on I-405 and SR 522, and Sounder south line capital improvements. Light rail will move closer to Snohomish County next year as Sound Transit begins construction of Lynnwood Link and construction of East Link light rail will continue to intensify.

With the November 2016 adoption of Sound Transit 3, the people of the Central Puget Sound region took a historic action to continue building the true mass transit system that has been talked about for decades. ST3 is equal in scope and timeline to the first two phases (Sound Move and Sound Transit 2) combined. It will establish a 116-mi. light rail network with more than 80 stations serving 16 cities, growing five-fold beyond its current size, at a scale comparable to the largest systems in the country.

By 2021, Sound Transit will complete light rail to the U District, Roosevelt and Northgate. In 2023 trains will reach Mercer Island, Bellevue, Overlake/Redmond, Shoreline, Mountlake Terrace and Lynnwood. From there, Sound Transit will keep building until the agency has completed the 116-mi. system. Next up will be getting light rail to Federal Way and downtown Redmond in 2024. From there, continuing expansions will focus on Tacoma, West Seattle, Ballard, Everett, South Kirkland and Issaquah.

Improvements also are coming to Sounder commuter rail service, which will serve 13 cities when planned extensions to Tillicum and DuPont are complete. Following the establishment of bus rapid transit along the north, east and south sides of Lake Washington the agency's ST Express system will serve 26 cities.

The plan integrates recently approved ST3 projects with projects voters approved in 2008 as part of Sound Transit 2. Highlights of project schedules in the plan include the following:

• light rail from Angle Lake to Federal Way will enter final design in 2017 toward a 2024 opening;

• light rail from Federal Way to Tacoma will enter development in 2017 toward a 2030 opening;

• the Tacoma Link extension to Hilltop will continue in final design toward a 2018 launch of construction and a 2022 opening;

• Puyallup and Sumner station access improvements will enter final design in 2017 toward openings in 2021;

• development of Kent and Auburn station access improvements will move forward in 2017 and 2018 toward 2023 openings;

• South Sounder capital improvements to increase capacity and station access from Lakewood will enter development in 2017 toward openings between 2024 and 2036;

• extension of Sounder to Joint Base Lewis McChord and DuPont will enter development in 2025 toward a 2036 opening; and

• the Tacoma Link extension to Tacoma Community College will enter development in 2026 toward a 2039 opening.

• construction of light rail from the University of Washington to Northgate will continue toward a 2021 opening;

• final design of light rail from Northgate to Lynnwood will continue toward a 2018 launch of construction and 2023 opening;

• light rail from Lynnwood to Everett via Paine Field will enter development in 2020 toward a 2036 opening; and

• North Sounder parking and access improvements at Mukilteo and Edmonds will enter development in 2017 toward completions in 2024.

• light rail between West Seattle and Downtown Seattle will enter development in 2017 toward a scheduled 2030 opening; and

• construction of light rail from Seattle to Redmond's Overlake area will continue toward a 2023 opening;

• development of light rail from Overlake to Downtown Redmond will continue toward a 2024 opening;

• the North Sammamish Park-and-Ride will enter development in 2017 toward a 2024 opening; and

• light rail between South Kirkland, Bellevue and Issaquah will enter development in 2027 toward a 2041 opening.