This project, which is ahead of schedule, is part of ALDOT and the city of Huntsville's five-year, $250-million joint-funding agreement for road and bridge infrastructure upgrades in the city. 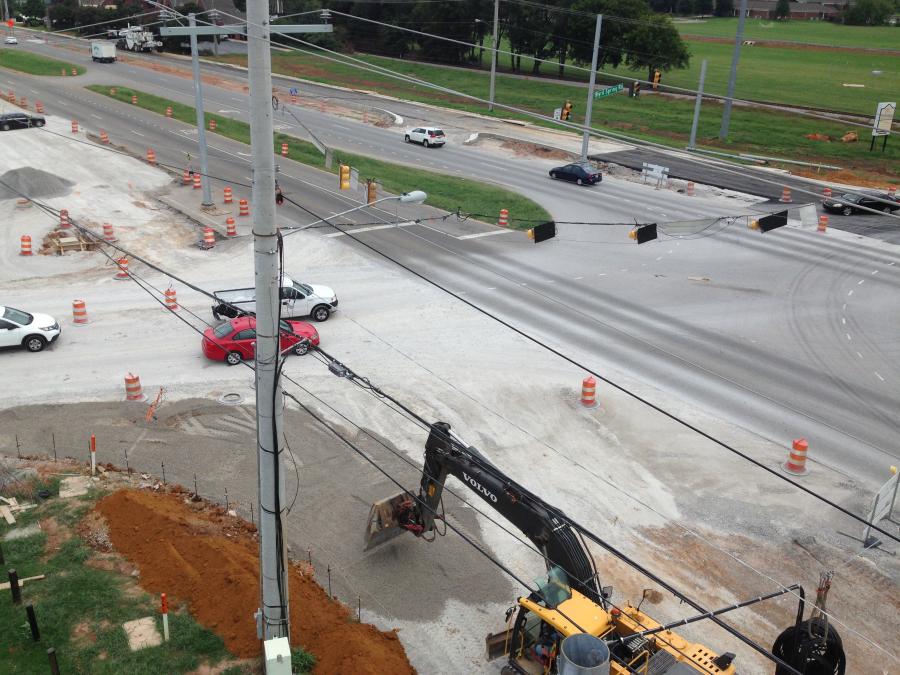 Crews work on the Byrd Spring intersection during Phase 1 of construction.

This project, which is ahead of schedule, is part of ALDOT and the city of Huntsville's five-year, $250-million joint-funding agreement for road and bridge infrastructure upgrades in the city.

The Memorial Parkway (U.S. 231) runs through the heart of Huntsville in Madison County.

“This section from north of Whitesburg Drive to south of Golf Road was a roughly 1.5-mile gap in the eight-lane expressway/service road system where traffic funneled into a divided six-lane with four signalized intersections in less than a mile,” said Seth Burkett, ALDOT's north region public information officer. “Martin Road, an important access point for Redstone Arsenal, crossed over the parkway via a two-lane bridge constructed in 1961.”

The traffic using these roads and bridges is considerable. In 2015, the parkway had an average of 64,020 vehicles daily just north of Lily Flagg Road.

The project includes the replacement of the Martin Road Bridge over U.S. 231 and the construction of U.S. 231 mainline, a four-lane highway with overpasses at Byrd Spring Road and Logan Drive/Lily Flagg Road, two-lane frontage/service roads on either side and interchanges between the overpasses along this 1.5-mi. stretch.

“The project ties in with existing limited-access portions of the parkway to the north and south,” said Burkett, “forming a continuous expressway from south of Mastin Lake Road in north Huntsville to north of Meadowbrook Drive in South Huntsville — a total of about 9.5 miles of expressway with service roads. It will improve traffic flow by allowing motorists on the four-lane mainline to bypass the intersections via the series of overpasses/underpasses, greatly decreasing traffic volume at the intersections and improving their efficiency.”

A major challenge for the project was limiting impacts on commuters as well as residents and businesses in the area. One way of doing this was to condense the timeline for construction, Burkett said.

“The project is divided into two phases that could have been let as separate projects,” he said, “but were instead tied together to eliminate any potential downtime between completion of one phase and authorization of the second.”

Also, the contract for the JV partners provides a total of $5 million in incentives for early completion or disincentives for late completion. The service roads and Martin Road bridge have been completed and are open to traffic, and work is well underway on the overpasses and mainline. A section of the mainline under Martin Road was opened in July to allow traffic to bypass the Martin Road intersection for the remainder of the construction.

“ALDOT and the contractors have worked very closely with city officials, local businesses, community groups and the media to make motorists aware of traffic changes,” said Burkett, “and to find solutions to reduce delays and impacts on businesses. One example of this is the Benaroya Connector, constructed by Reed under a separate contract with the city, which provided alternate access to a business district as well as an alternate route for traffic leaving the arsenal. Another, is the early opening of the portion of the mainline under Martin Road, which originally would not have opened until all overpasses were complete.

“This project is part of a $250-million joint-funding agreement with Huntsville, in which ALDOT and the city each cover half of the combined expense of all projects funded under the agreement,” he said. “Another project under this agreement will extend the North Memorial Parkway expressway north of Mastin Lake Road, including construction of an overpass at Mastin.”

The infrastructure for the ongoing work was designed by outside consultants.

ALDOT is doing all it can to minimize the impact on local traffic and businesses.

“Whenever possible, two lanes in each direction were kept open,” said Burkett.

The Phase 2 portion of the work also will be completed early.

Construction on Phase 1 — Memorial Parkway service roads (two-lane) and new bridges, and a wider elevated intersection on Martin Rd —began on Dec. 2, 2015 and was completed in August, more than three months ahead of its Dec. 1 deadline. Phase 2 work — the Memorial Parkway mainline (four-lane and overpass at Byrd Spring Road and Logan Drive/Lily Flagg Road — is due to be complete by June 1, 2019, but all major work items may be complete as early as summer 2018.

The major challenges for the work involved relocating multiple utilities within very limited right-of-way, maintaining business turnouts and/or side streets during their installation and coordination/communication between multiple stakeholders.

The project managers for the joint-venture, have been on top of all of the issues and challenges, and they and their management team and crews have overcome them through solid planning and lessons learned from previous projects.

“They have adapted very well to conditions on the ground,” said Burkett. “Whenever issues have come up, they work very hard to meet those issues head on and overcome them.”

The work is being done mainly by day, with some night work.

“They have worked at night to reduce impacts on traffic,” said Burkett. “This is mainly for setting bridge girders and other related elements. Approximately 1,400 feet of pipe was pulled at night to lessen the inconvenience to businesses and the public, as the pipe had to be staged across a number of business entrances and cross streets.”