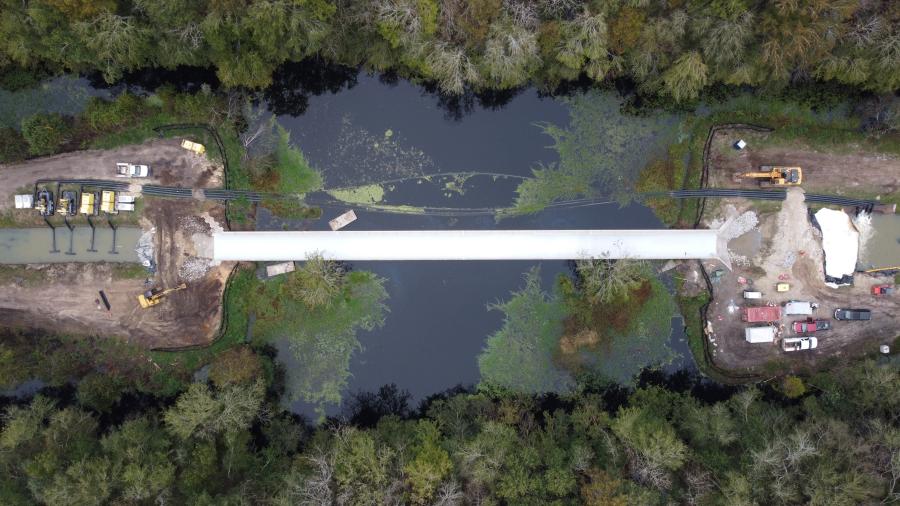 When general contractor L-J Inc. was awarded the project and Spartanburg, S.C.-based construction company Ascex was subcontracted, they turned to specialty coatings manufacturer Wolverine Coatings Corporation to address problems experienced with the rehabilitation of the 300-ft. concrete flume located in the middle of a swamp area. (Wolverine Coatings Corporation photo)

It's not every day that onlookers at a construction site include alligators and venomous snakes, but at the recently completed Savannah River Flume, part of the larger Raw Water Canal Improvements approved by Beaufort — Jasper Water & Sewer Authority (BJWSA) — that was the guaranteed daily scene. 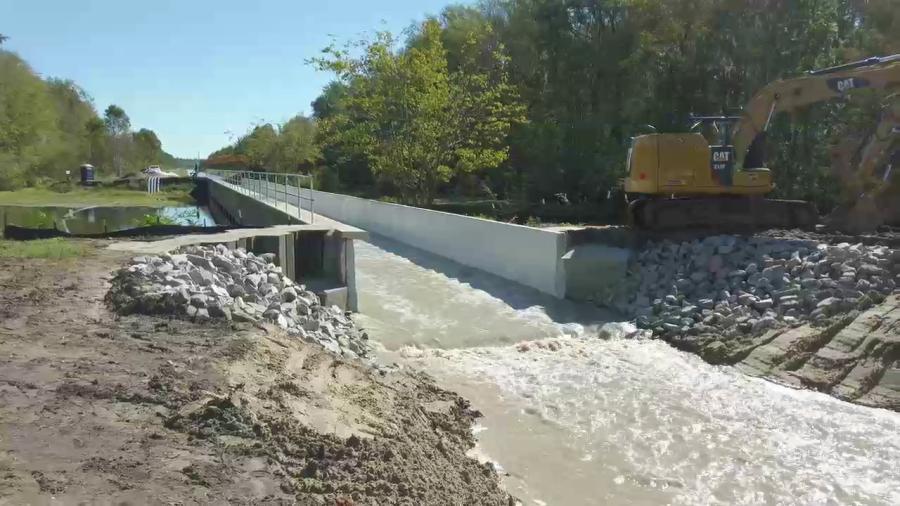 When general contractor L-J Inc. was awarded the project and Spartanburg, S.C.-based construction company Ascex was subcontracted, they turned to specialty coatings manufacturer Wolverine Coatings Corporation to address problems experienced with the rehabilitation of the 300-ft. concrete flume located in the middle of a swamp area. The flume carries raw water from the Savannah River into two processing facilities to be turned into clean drinking water for local communities.

There were many hurdles to overcome, including finding the best products to restore the aging structure while also satisfying NSF/ANSI (National Sanitation Foundation/American National Standards Institute) Standard 61 and Standard 372: Drinking Water Systems requirements — integral to this project considering water traveling through the flume would be processed for drinking water. Care had to be taken to avoid disturbing the swamp environment located in a publicly traded wildlife area/game management property while ensuring drinking water was available without interruptions. Other challenges included an eight-day specification and product lead time compared to projects of similar nature being planned almost a year or more in advance.

Wolverine stepped up by furnishing seven specialty products — primer: BondTite 1101; repairs: IntegraFlex 1921, FlashPatch 1221; sealer: AcryliSeal 3501; cove: CoveEase 1901; base coat: LiquaTile 1187; and topcoat: LiquaTile 1172. These enabled the company to restore the structure and maintain functionality for the next few decades. Attention was paid to material used so as to not leave any residuals in the area and coatings were 100 percent solids, zero VOC (volatile organic compounds). Of course, there was the not so last-minute detail of finding a good contractor with an available schedule to mobilize equipment and skilled labor to the job site at such short notice. Trusted project management services provider Specialty Coating Solutions (SCS) was contracted to bring in the resources to commence work. 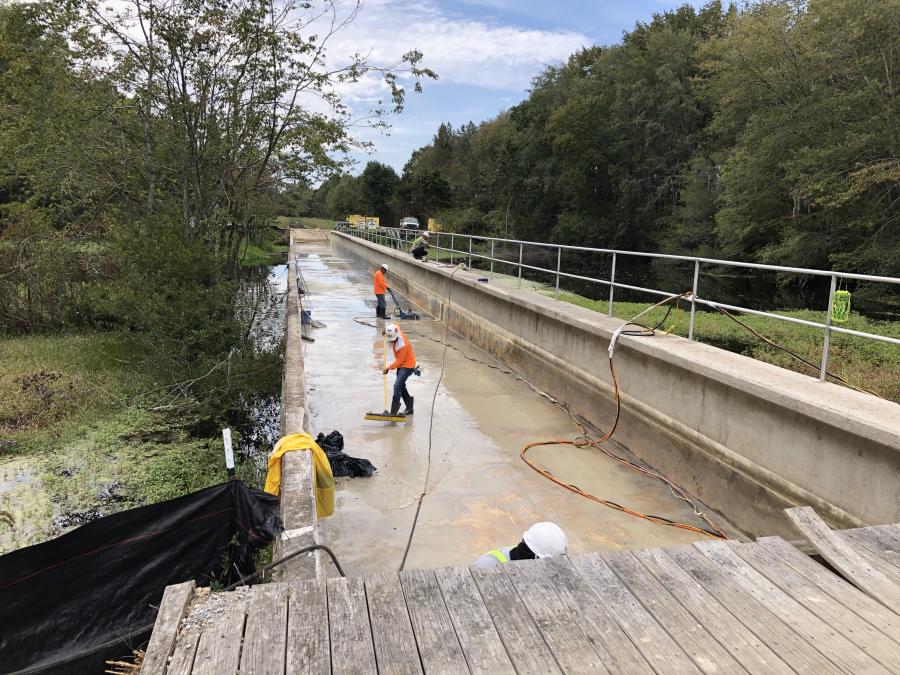 "The speed at which everything had to happen, and there is a lot of challenges right now, we are in a period of time where there are shortages on resins and raw materials, so the stakes on this project were high," said Eric Swanson, president of Wolverine. "The surrounding counties were using more water than anticipated so if they didn't get the flume back in service at some point, they were going to run out of drinking water."

"With water flowing over that infrastructure nonstop for years, there's residue and mud and dirt that's got to be cleaned up and coated to preserve it without messing up the swamp environment, which is a natural pristine area that was about 50,000 acres of a preserve," said Heise.

The job site being located 6 mi. off road meant transporting equipment and materials was its own production of sorts, requiring ample planning among all teams onsite, and presented complications in obtaining water supply that was sufficiently clean to do the prep work. He likens it to camping, "If you forget something, you had to go back to get it," Heise said. "Even though it's in the Savannah-Hilton Head area, the location was still off the beaten path."

To prepare the flume's surface to receive primer, it was blasted by water jetting, both inside and outside the structure. Repairs were made to treat any cracks or holes. The outside of the flume was coated with Wolverine's Nano-Polymer chemistry, all while avoiding the watchful eyes of the reptilian swamp squad. This was followed by prepping, patching and priming of the flume walls, filling and sealing joints and troweling a cove across the base of both walls of the 300-ft. flume. Then the base coat was applied via airless sprayer – the high-density (low porosity) base coat was specified for its excellent resistance to aggressive immersion chemical environments – and once cured, the crew went ahead and applied the topcoat. 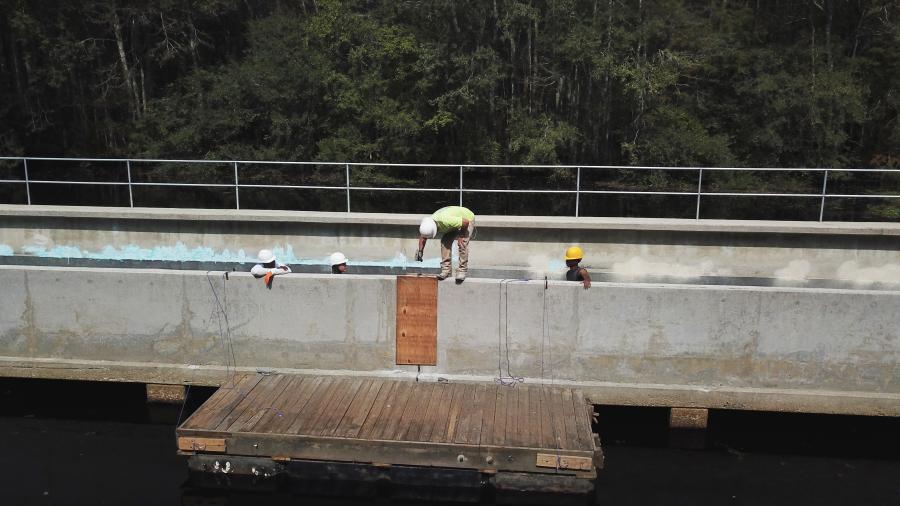 Equipment used was a 40,000 psi Aqua Miser water blaster — a towable pressure washer — and a plural component airless sprayer equipped with Graco pumps and pneumatic agitators assembled by Spray-Quip Inc. Other equipment/machinery onsite included Caterpillar diesel pumps transferring water from one side of the flume to the other, Hitachi excavators to move dirt to make the dams, Bobcat skid steers and flatbed gooseneck trailers. With work occurring outdoors, precautions were taken to ensure when coating was done, especially on the outside of the flume, which required getting onto a little dock and floating along the sides. All this was done adhering to local COVID-19 health and safety regulations.

Jackson said, "The swamp is a protected environment by state and federal, it's not something we could play around with. There were high fines if we left even a water bottle in the swamp, so you had to respect it."

They were given 15 days to coat the interior part of the flume but finished well in advance using just five crew members.

"We had to seal every joint, repair every crack," Miller said. "The coating took three to four days, but the repair took seven to eight days, 85 to 90 percent was prep work and making sure the conditions are going to be correct with clean surfaces, and the coating aspect is the last 10 to 15 percent. Every step is critical, but some steps take a little more time."

While this part of the larger project has been completed to BJWSA's satisfaction, work continues on the overall canal improvement, with the possibility that these expert coatings solutions providers might have an additional role to play. CEG