State Announce $2.2B for Highway Projects

The funding for these projects not only reduces the backlog of the state's pavement and bridge demands, but significantly improves the growing need for better mobility and safety on the roadways. 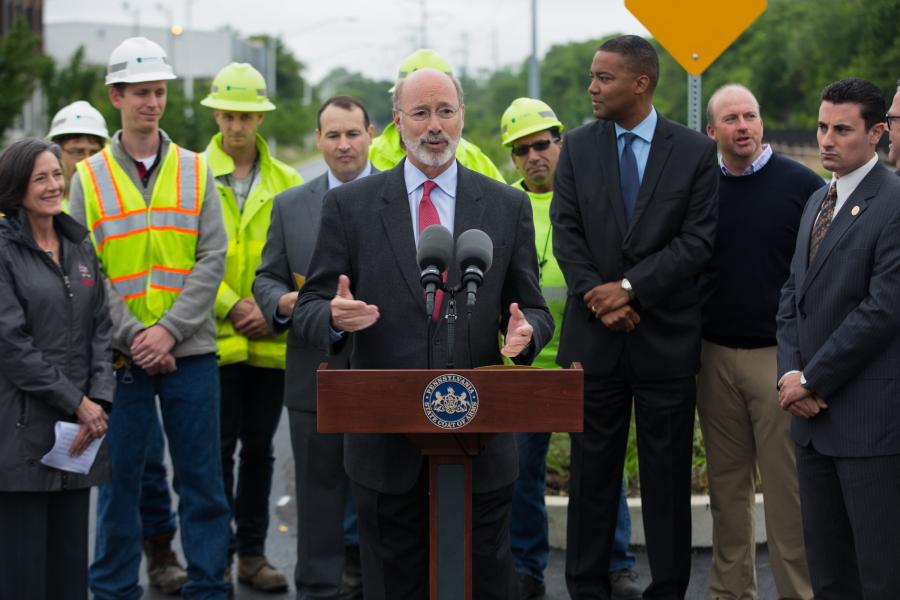 Gov. Tom Wolf and the Pennsylvania Department of Transportation (PennDOT) announced that more than $550 million in highway and bridge improvements will begin or be bid across the Philadelphia region during the 2017 construction season.

Gov. Tom Wolf and the Pennsylvania Department of Transportation (PennDOT) announced that more than $550 million in highway and bridge improvements will begin or be bid across the Philadelphia region during the 2017 construction season, bringing the region's total contract work this year to roughly 125 projects worth $2.2 billion.

“The funding allocated for these projects not only reduces the backlog of Pennsylvania's pavement and bridge demands, but significantly improves the growing need for better mobility and safety on our roadways,” Wolf said. “This major investment in our infrastructure that will greatly improve our vast transportation network, enhance local communities and generate more robust economies across the state.”

The announcement was made on a site within the Lafayette Street Extension Project, a $95 million project that will spur economic redevelopment in Norristown and strengthen one of Plymouth Township's busy retail and industrial centers.

• approximately 33 bridges will be repaired or replaced.

“The infusion of additional funding through Act 89 has allowed us to move critical projects into construction that will help extend the service life of our highways and bridges, improve safety and strengthen our infrastructure for future generations,” said Kenneth M. McClain, District 6 executive.

Notable projects that have recently moved into construction include:

Notable projects that are expected to be bid this year include:

• 14 contracts to resurface 235 segment mi. in the Philadelphia region.

A map showing all contracted work that District 6 has under way or that will start or be bid this year is available at penndot.gov/district6 on the “Construction Projects/Roadwork” page.

Serving as another example of transportation's impact on communities, the three-phase Lafayette Street project is funded 80 percent by the Federal Highway Administration (FHWA) and 20 percent by Montgomery County. Montgomery County initiated the project and manages it in partnership with PennDOT and the FHWA. The first phase, which extended Lafayette Street past its former limit at Ford Street into Plymouth Township, finished construction in early 2015. The second phase, completed in December 2016, improved local roads in preparation for the eventual interchange and includes widening Ridge Pike between Ross Street and School Lane; realigning, rebuilding, and signalizing Fairfield Road and Diamond Avenue; and connecting the extended Lafayette Street into Diamond Avenue.

The third phase, estimated at $25 million, is on schedule to be bid this fall with construction expected to begin in the spring of 2018 and will widen and rebuild the existing Lafayette Street in downtown Norristown. The work also will improve mobility for bicyclists and pedestrians by installing a pedestrian crossing at the Norristown Transportation Center and connecting the Schuylkill River Trail and the Chester Valley Trail at DeKalb Street and Lafayette Street.

For more information on projects occurring or being bid this year, those made possible by or accelerated by Act 89, or those on the department's Four and Twelve-Year Plans, visit projects.penndot.gov.