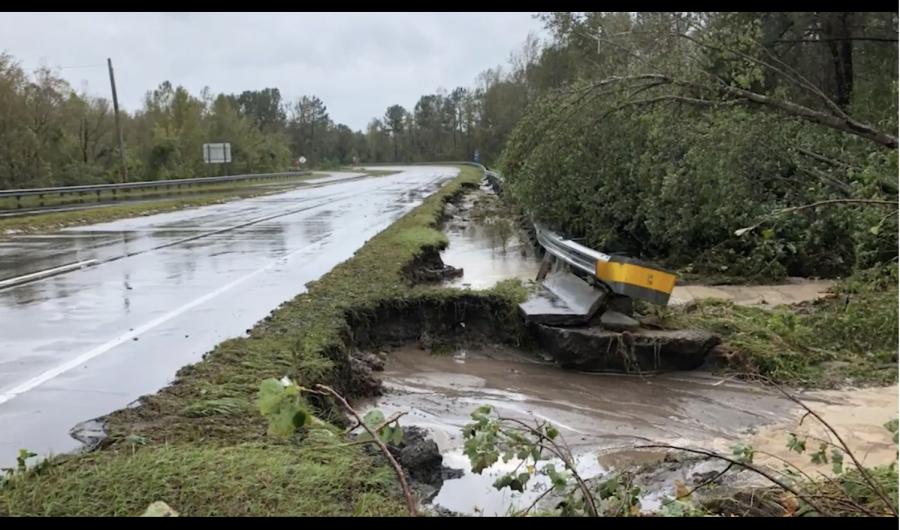 he North Carolina DOT reported on Sept. 20 that a total of 763 roads are closed in the wake of Hurricane Florence.

State department of transportation workers, national guardsmen and a host of other federal, state and local personnel fanned out across North Carolina and South Carolina this week to assess and start fixing the damage left behind by Hurricane Florence.

The Carolinas took the brunt of storm, which dumped between one and three ft. of rain on the region, flooding out roads and highways while damaging bridges and destroying homes.

“Hurricane Florence came in and stayed, going to North Carolina and South Carolina, and left record amounts of rain,” said South Carolina Gov. Henry McMaster during a press conference with President Trump on Sept. 19. “So our problem has not been with the wind and the rain hitting us, but with the rain that is still here. And we have not only the record amounts that have dropped on South Carolina, particularly in this third of the state, but we have the water coming down from North Carolina, because we have three watersheds, three river sheds. The Waccamaw, the Pee Dee, and the Lynches River. So the rain and the water that you see out there now is just the beginning. The worst is yet to come.”

“So I know you've had a rough few days [but] this could last a long time,” President Trump added. “But you're going to have a rebuilding process, and we are behind you. Now it looks nice, but it's really the calm before the storm. Because you're going to have a lot of water. Already you've broken all records, and this is going to add four, five, six ft. of water all over.”

The White House provided a tally of the federal, state, and local response effort to Hurricane Florence on Sept. 19 – a storm expected to cause between $17 billion and $22 billion in damage, according to news reports.

Nearly 20,000 Federal employees overall have been mobilized to assist with storm recovery efforts, the White House said, with the Department of Defense assigned approximately 13,000 personnel as well, including some 6,000 active-duty personnel and more than 7,000 National Guardsmen. The U.S. Coast Guard also deployed 3,000 personnel in 27 helicopters, 11 fixed wing aircraft, 14 ocean-going cutters, and 35 shallow-water craft – with the National Guard performing more than 535 rescues and evacuations in North Carolina alone, while the Coast Guard saved over 400 lives and 200 pets in its search and rescue efforts.

The North Carolina DOT reported on Sept. 20 that a total of 763 roads are closed in the wake of Hurricane Florence – with majority of them in the eastern part of the Tar Heel state – and that its work crews are now fanning out to assess not only flooded roads but railway, aviation and ferry assets as well. Sections of Interstates 40 and 95 remain underwater, the agency said, and more flooding is expected as major rivers – especially the Neuse River – overflow their banks.

“In many communities there is still a wait for water to drain away. And other roads may become flooded as rivers, such as the Neuse, reach flood stage later in the week,” the agency said.

“NCDOT has deployed more than 100 of its employees from areas of North Carolina where the damage from Hurricane Florence was not as severe into the state's hardest hit communities,” the agency said.

“Road crews in the northeastern part of North Carolina loaded up backhoes and dump trucks to help fix roads in the New Bern area. Teams from Raleigh were dispatched from the southern Triangle counties to the South Carolina border and the Wilmington area,” it said. “And crews from the mountains made the trek to the coast to help their colleagues repair roads and replace culvert pipes destroyed by Florence. Additional personnel and equipment will be deployed as flood waters recede and needs are determined.”

In South Carolina, Gov. McMaster sent a five-page letter to South Carolina's congressional delegation asking for over $1 billion in financial aid due to the damage caused by Hurricane Florence. Included in that letter is a request for $540 million worth of community development block grants for disaster recovery, $300 million for a disaster relief fund, and $18 million in Federal Highway Administration aid.

The South Carolina DOT also worked closely with the South Carolina National Guard on several key emergency road projects, particularly “Project Lifeline,” which is designed to preserve U.S. 378 as the only major route into Myrtle Beach. The South Carolina National Guard assisted SCDOT in the construction of the barriers on the U.S. 501 bridge over the Waccamaw River in Conway as well as the approaches to the bridge, along with the establishment of a similar barrier on U.S. 378 in Florence County crossing the Lynches River.

“The Guard's willingness to pitch in on these efforts freed up many SCDOT workers to clear and repair numerous roads throughout the Pee Dee Region of the state – a big job that is on-going,” the agency said in a statement.