State transportation officials estimated it would need an initial investment of $3 billion just to get the first 40 miles completed. 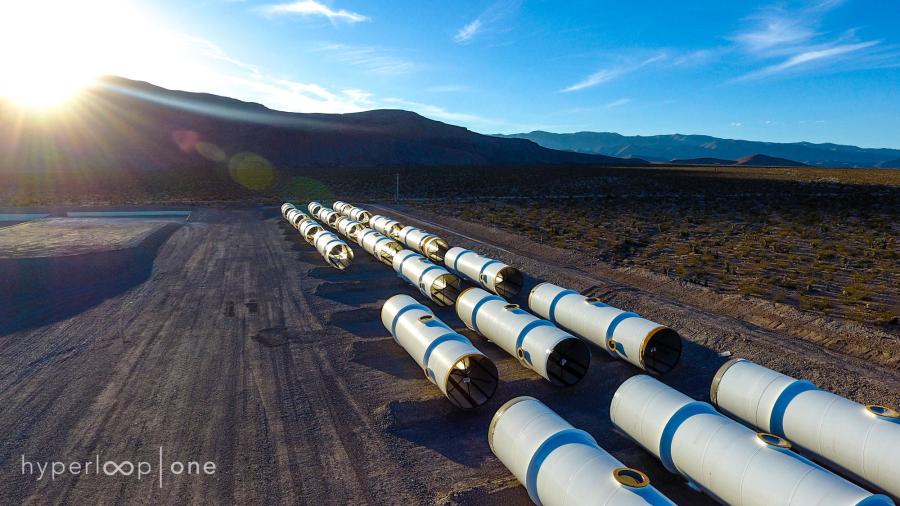 After partnering with Virgin Hyperloop One, one of the companies racing to develop the super-speed technology that essentially would transport vehicles and people pods on electric skates in a big pneumatic tube, Colorado Department of Transportation officials plan to spend the next nine months crunching the numbers to determine what it might take to bring this type of transit to Colorado.

Colorado transportation officials are looking at possibility of a Rocky Mountain hyperloop to curb traffic woes.

Elon Musk's idea of a levitating transit pod that can reach speeds of 700 mph sounds as far-fetched as flying cars. You could travel from Fort Collins to Colorado Springs, a distance of about 125 miles with Denver in the middle, in less than 20 minutes.

Denver International Airport? Those speeds, it would take less than 10 minutes to travel the 55 miles as the crow flies.

After partnering with Virgin Hyperloop One, one of the companies racing to develop the super-speed technology that essentially would transport vehicles and people pods on electric skates in a big pneumatic tube, Colorado Department of Transportation officials plan to spend the next nine months crunching the numbers to determine what it might take to bring this type of transit to Colorado.

Above-ground routes are cheaper to build. But Musk's Boring Co., another company testing the technology, has been focusing on hyperloop transportation in tunnels.

Electricity moves hyperloop pods forward and gradually accelerates them through a low-pressure tube. Magnetic forces lift the pods above a railroad-like track, where they glide at speeds similar to airplanes because the friction and wind resistance inside the tube are less than on a train or subway.

The proposed Rocky Mountain hyperloop would be centered at Denver International Airport and stretch about 100 miles north to Cheyenne, Wyo.; about 125 miles south to Pueblo, Colo.; and about 100 miles west to Vail, Colo. It carries a hefty $24 billion price tag.

State transportation officials estimated it would need an initial investment of $3 billion just to get the first 40 miles from the airport north to Greeley, Colo., completed.

This steep financial cost combined with lingering questions about how the technology would function in the real world have left Colorado transportation officials; Virgin Hyperloop One; and their partner, engineering firm Los Angeles-based AECOM (ACM) with a lot of homework before this futuristic fantasy could become reality here.

Why a hyperloop? State officials estimate Colorado's population will grow by nearly 50 percent in the next 20 years.

That has left transportation experts scrambling for solutions to address the added pressure to interstates and highways already groaning.

“Moving people rapidly from one place to the next has implications of radically changing how we think about land use, and where people live, and where they work, and how they get between that,” state transportation spokeswoman Amy Ford said.

Here, about half of working adults drove to jobs in other communities in 2014, according to to the U.S. Census Bureau,. That number was even higher in other cities, such as Loveland, where nearly two-thirds of employed residents had jobs outside of city limits.

“We cannot build our way out of congestion, and that's why we're looking so widely at technology,” Ford said.

In its proposal to Virgin Hyperloop One, Colorado officials argued that the technology could give a tremendous boost to the state's economy by connecting its industry clusters and workforce. The proposal also estimated that a hyperloop's operation in Colorado would augment the Front Range's gross regional product — the market value for all of its goods and services — by 7 percent by 2040.

The Colorado Department of Transportation plans to widen the 70 miles of Interstate 25 from Wellington, Colo., to Denver, but that project is slated to be completed in increments with full completion not in sight until 2075.

David May, president of the Fort Collins Area Chamber of Commerce, emphasized the importance of not counting on a hyperloop to solve transportation problems.

“We still need to work within the current transportation technology paradigm,” he wrote in an email. “That means putting money into widening I-25 and other state transportation projects. It's OK to dream about El Dorado as long as you continue to invest in 'Realville.' ”

But with a hyperloop, Colorado transportation officials see a chance to ease congestion on busy roads and ease the burden of lengthy commutes.

“The traffic congestion, tolls, and transit options within the Denver metropolitan area would no longer be the constraining factor in people's decisions about where to live and work,” they argued in their Rocky Mountain hyperloop proposal. “The hyperloop option would make it faster to commute from Colorado Springs or Fort Collins to the DEN Aerotropolis than it would take 80 percent of the residents of the Denver metropolitan area to reach the airport using existing modes.”

Although Virgin Hyperloop One, known as Hyperloop One before getting an undisclosed cash infusion earlier this month from Virgin Group founder Richard Branson, has outlined an aggressive timeline for construction — it says it wants to have three operating hyperloop systems by 2021 — a Colorado route still has potential roadblocks.

The biggest is money. No one seems quite sure who would foot the $24 billion price tag.

“We've long said we don't intend to be the main pockets for this,” Ford said, about the state's transportation budget.

How a Colorado hyperloop would be financed could shift its purpose, at least at first. If a private investor paid for the bulk of the project, that could create a bigger incentive to use the system to transport cargo rather than people.

Ford said she hoped that eventually the system could be used to move both people and goods. The feasibility study that Colorado officials are working on in partnership with AECOM and Virgin Hyperloop One will explore how that could happen.

That study is set for completion next summer.

AECOM's vice president of transportation, Alan Eckman, said the technology has potential to function in both capacities though he thinks transporting cargo via a hyperloop would be a good start.

“Cargo certainly seems like a more simple way to look at how you could test it, but I think it would be a very fast transition,” he said. “I don't think it has to be years of operation before you could transition it.”

Agencies looking at the feasibility of a Colorado hyperloop also are studying what regulatory hurdles they would need to clear before sending hyperloop pods zooming across the state.

The Colorado Department of Transportation is focusing much of its efforts in the feasibility study on determining what would need to happen for the technology to gain approval from the federal government.

The study would need to look at how the different jurisdictions and states in a possible hyperloop would interact with each other and establish consistent requirements for the route, Eckman said.

Because no hyperloop is reality yet — Virgin Hyperloop One does have a test track in North Las Vegas, Nev., where it set an almost 200 mph speed record in August — some of the most basic logistical questions still haven't been answered. The experts still don't know how often hyperloop pods would need to stop at stations along the route or whether passengers would need to go through airport-style security lines before boarding.

"Those basic operational questions would need to be at least addressed in the first feasibility study," Eckman said.

In its proposal to Virgin Hyperloop One, Colorado officials acknowledged that building a hyperloop route in phases, starting with stops that would benefit from the high-speed travel and present fewer logistical barriers to construction, would make sense.

The proposed first leg would run 40 miles from Greeley to Denver International Airport, linking the home of the University of Northern Colorado, a renewable energy cluster and one of the nation's largest beef exporters to other Colorado transportation hubs.

Greeley Mayor Tom Norton said he is interested in the prospect of a hyperloop is waiting for more information about how financing the project would work.

Even though Greeley and surrounding Weld County are approaching 300,000 residents, that isn't enough of a population center to carry the technology forward, he said. Instead, a hyperloop would need to be accessible to all of Northern Colorado.

"Let's find out what the reality of this is," Norton said. "You never know what technology will do. ... It could change your world, so being involved with it is important."

The Greeley route could be built faster than other hyperloop options because it would run above ground along more undeveloped plots of land, meaning it would have fewer right-of-way issues, Ford said.

The route also would include a stop on Interstate 76, where rail station connects Colorado to Nebraska. That could prove valuable if hyperloop is used for cargo.

Colorado's feasibility study will look closely at the Greeley route but is more broadly focused on the Front Range urban corridor, just east of the mountains, and what might make sense for that part of the state, Ford said.

“If this is a 100-step process. We're probably on step 5,” she said. “We're defining it, creating parameters under which this could move. … That's the important piece."