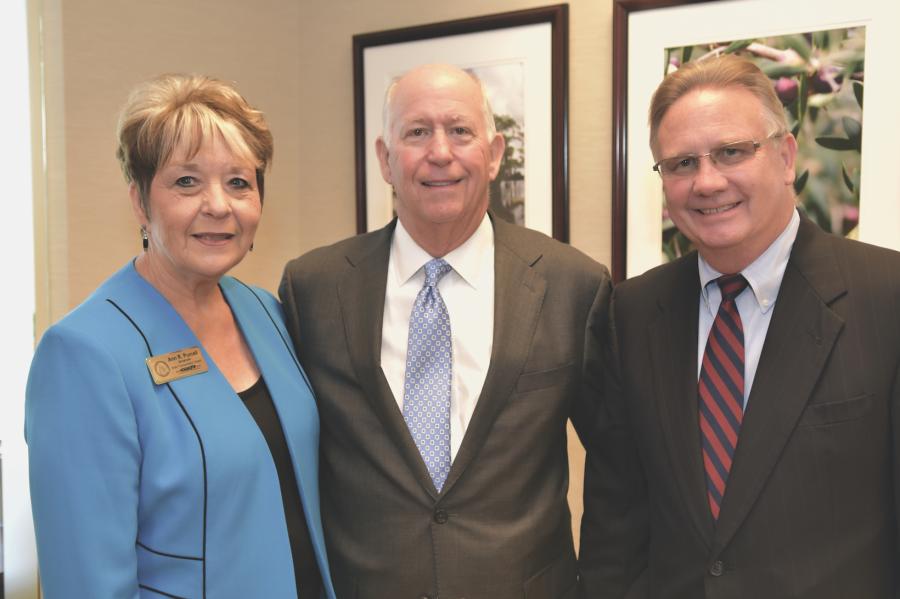 (L-R) are Ann R. Purcell, vice chairman, Jamie Boswell, chairman and Tim Golden, secretary, all of the state transportation board.

New Chairman Jamie Boswell of Athens represents the 10th Congressional District and has served on the board since 2013, most recently as vice chairman. Boswell serves on five committees and previously chaired the Property Utilization Committee. He is a business and civic leader; president and owner of a group of insurance, real estate and appraisal companies. As chairman, Boswell will serve as ex officio member of all committees.

Boswell replaces Robert L. Brown, Jr. of Decatur who has served on the board for 12 years and represents Georgia's 4th Congressional District. Brown is credited with leading the board and the agency through a very busy year that included multiple extreme weather events and the rebuilding and reopening of the I-85 bridges. Brown is a business, community and civic leader; a registered architect; and president and CEO of an architectural and construction management firm.

“I am extremely proud to continue my service to the citizens of the state of Georgia, now as the chairman of the State Transportation Board,” said incoming Chairman Boswell. “Under the guidance of outgoing Chairman Brown, and the leadership of Commissioner McMurry, the employees of the Georgia Department of Transportation have much to be proud of — from centennial celebrations, extreme weather events, and the opening of Georgia's first reversible express lanes to the advancement of the Major Mobility Improvement Projects MMIP initiative, the addition of CHAMP to our interstate highway safety program, and Georgia DOT's busiest summer construction program in years. And let's not forget those six weeks from the collapse of the I-85 overpass to its remarkable rebuild.”

“I am honored to take on this role and to continue a legacy of stewardship and a commitment to serve the citizens of this great state,” he said.

Vice Chairman Ann R. Purcell of Rincon is a community and civic leader who represents the 1st Congressional District. She was elected to the board in 2013 and this past year served as board secretary and on three committees. Purcell served 18 years in the Georgia House of Representatives.

Board Secretary Tim Golden of Valdosta, who represents the 8th Congressional District on the State Transportation Board, served 16 years in the Georgia State Senate prior to his election to the board in 2015. He also served seven years as a representative in the Georgia House. Golden — a business and civic leader — has been named three times to Georgia Trend's 100 Most Influential Georgians list.