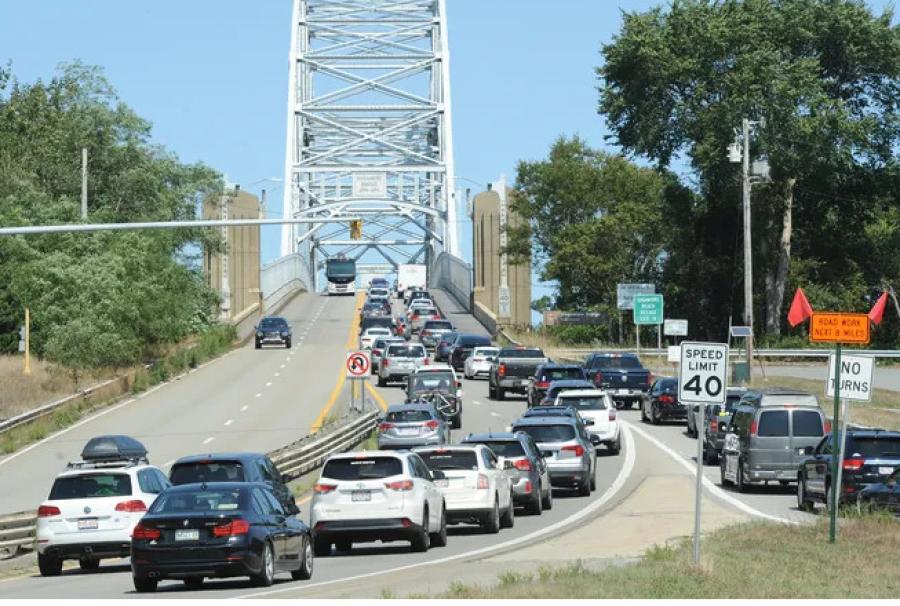 Within the new $900 billion stimulus bill is the Water Resources Development Act of 2020, a piece of legislation involving water infrastructure around the country, including the Bourne and Sagamore bridges. (Merrilly Cassidy photo)

A commitment to the replacement of Massachusetts' aging Cape Cod Canal bridges, along with federal transportation dollars, were tucked into the massive package of emergency relief, government funding and tax cuts approved by Congress on Dec. 20.

The replacement of the 85-year-old Bourne and Sagamore bridges was among 65 projects the Secretary of the Army would expedite to preconstruction planning, engineering and design, if justified, as part of the Water Resources Development Act of 2020 — one of several pieces of legislation that was included in an omnibus package passed along with the $900 billion stimulus bill.

Also, in the more than 5,000-page package was possible funding for bridges in poor condition and other transportation projects, said U.S. Rep. William Keating of Massachusetts.

He had already spoken with Stephanie Pollack, Secretary of the state Department of Transportation (MassDOT) about the potential for as much as $60 million for bridges across the state in the federal budget portion of the bill, Keating said.

Transportation overall will receive about $45 billion in the economic relief piece of the legislation.

The U.S. Army Corps of Engineers (USACE) owns and operates the two automobile bridges over the Cape Cod Canal. Facing increasingly bigger and more frequent maintenance, the Corps announced earlier this year that it planned to replace the bridges, though the state would lead the new construction efforts and take over ownership once they were completed.

What the new bridges would look like and the timeline for replacement have not yet been nailed down, but a report by the USACE last fall included plans for wider lanes to meet highway standards, a median, shoulders and separated pedestrian and bicycle areas. The bridges also would have two travel lanes in either direction, plus a pair of auxiliary lanes for vehicles getting on and off the adjacent exits.

The USACE's projected construction could start as early as 2025, but funding has not yet been allocated for the estimated $1 billion project.

It's not clear what would be expedited or how this change would affect the project's trajectory since the Corps and the state have said they plan to do it.

"During the coronavirus pandemic, it is more important than ever that we provide relief and support to communities throughout Massachusetts," said Markey in a statement. "I am proud that the water infrastructure legislation passed today includes many of our key provisions, which will provide new and more robust resources to help localities recover and grow their economies, while also bracing for the impacts of climate change. I look forward to building on this progress with comprehensive investments in sustainable and resilient infrastructure in the next Congress."

Markey is a member of the Environment and Public Works Committee, which had jurisdiction over the legislation.

Warren also was glad to see the legislation support critically important infrastructure projects in the state.

"I will continue to fight to ensure our communities have the resources they need to protect against future impacts of climate change and allow for continued economic growth," she said in the statement.

MassDOT was thankful for the state's congressional delegation's work in securing the extra money and is evaluating how this new funding can help improve the transportation network across the Commonwealth, a spokesperson wrote the Cape Cod Times in an email, adding that the agency continues to meet with the Corps and is working on internal design planning for the roads around the canal.

"We will have to wait for this stimulus bill to be signed by the President into law and then passed down to [the Department of Defense] and through the Secretary of the Army priority chain before we may have any specifics for release or know how this affects specific projects," he said.