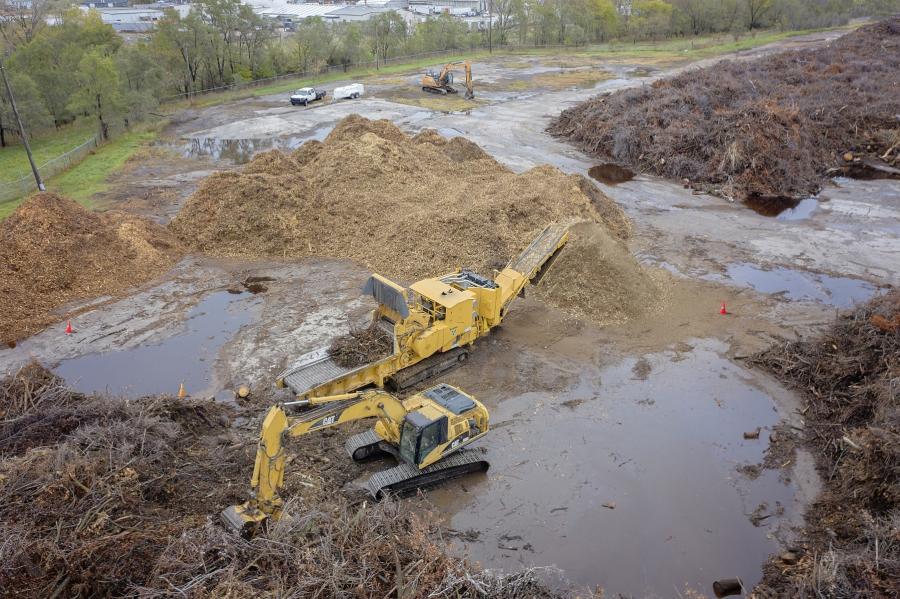 Throughout the cleanup efforts, crews were able to keep up with the work due to the support they received from their local equipment dealer, Vermeer Iowa and N. Missouri, which was ready to get equipment to, as well as lend services to, businesses that were working around the clock to help people recover from the storm.

Just months after it ripped its way through the Midwest, the derecho that slammed into the nation's Corn Belt on Aug. 10, 2020, was labeled the costliest thunderstorm disaster in United States history. No other single thunderstorm event — not even a tornado — caused as much devastation. There was more than $7.5 billion in damages according to the National Oceanic and Atmospheric Administration (NOAA), with millions of acres of crops laid to waste; hundreds of homes severely damaged or ruined; and thousands of trees destroyed.

This area of the country regularly experiences severe thunderstorms like the derecho. These events happen when warm, humid airmasses coming up from the Gulf of Mexico collide with cold, dry airmasses coming down from Canada, which is common in the spring and summer months. Because the Midwest is no stranger to the devastation these types of events can cause, companies like Wright Outdoor Solutions and Elder Corporation are always poised and ready to lend a helping hand in local communities after disaster strikes.

"Mother Nature can be unpredictable, so we have to be ready 24/7 to provide emergency tree care services," he said. "We can mobilize storm response teams and equipment at any time to safely and efficiently clean up all kinds of storm debris."

"We're the boots on the ground after big storms — we're there when the work is there so it can get done," said Shores. "Our job is to come in and help get everything back to normal as soon as possible."

Elder Corporation is a Pleasant Hill, Iowa-based company that offers a variety of specialty services including land clearing and organic wood waste grinding.

Being prepared to deploy quickly requires having teams of trained professionals and a fleet of equipment to support them. Vital equipment in the early hours after the storm ranged from loaders — such as Vermeer mini skid steers — and chain saws for removing tree limbs and debris blocking roadways to brush chippers and horizontal grinders to process all of the organic wood waste produced by the storm.

A term coined in 1888 by Gustavus Hinrichs, a physics professor at the University of Iowa, derecho means "straight ahead" in Spanish and distinguishes the true nature of this type of storm from other thunderstorms — straight-moving winds from the swirling gusts of a tornado. Central Iowa averages one derecho every two years, and wind gusts during these events are comparable to the peak experienced in an EF3 tornado or major hurricane.

The August 2020 derecho event more than qualified for its derecho title with winds in the area gusting to more than 70 mph — up to 112 mph in some areas — for the better part of an hour. When the storm was over, the derecho path tracked across nearly 770 mi. of the Midwest, going through several states, including Nebraska, Iowa, Illinois, Indiana and Ohio, and lasting around 14 hours.

"That morning, a friend in Omaha, Neb., called me and told me they just had a big storm roll through, and 45,000 people were without power," said Sutherland. "About 20 minutes later, one of my employees received a text from his wife saying they had just had 70-mile-per-hour winds near Grand Junction, Iowa. At that point, I notified our crews that a major storm was heading our direction and to be prepared."

Sutherland said that once the storm was over, his crews went right to work helping local residents and businesses.

"We had a couple of crews get caught during the storm on roads that ended up getting blocked by debris, so they just started working for customers on the streets there. Crews that made it back to the shop were immediately dispersed as calls came in for help," he said. "Our first priority was to open up driveways and roadways so people could get out — we needed to make sure there was no immediate jeopardy to people from falling limbs and other hazards. After that, we started removing trees from houses and cutting them into smaller sections." 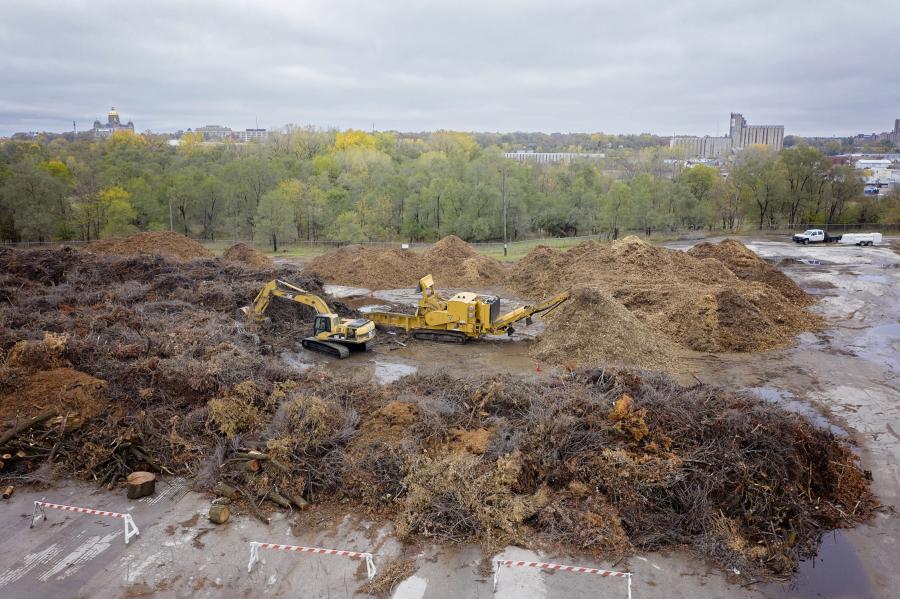 As piles started to accumulate, Sutherland crews used their Vermeer mini-skid steers to move the debris away from their customers' homes and businesses and out to curbs. Later, they circled back with Vermeer brush chippers to grind the wood waste and Vermeer stump cutters to take out the tree stumps onsite. To keep up with the volume of work, the Wright Outdoor Solutions crews also used log loaders to haul some of the debris back to their shop to grind. Sutherland said the company turned the ground wood waste into mulch for use in client landscaping projects and for sale to the public.

According to Sutherland, this effort is just part of initial storm cleanup efforts. He estimates it's going to be at least a year before his crews can completely remove all of the storm debris customers have following the derecho. That's because even though the derecho immediately ripped such huge holes in the tree canopy above a number of Iowa towns and cities, the toll of the storm has only worsened in the proceeding months. Wounds left by torn limbs allow pests and pathogens, such as oak wilt, to infect damaged trees. And as the seasons change, leaves begin to fall off of the trees and expose splits in trunks that couldn't be seen before.

"During a storm of this magnitude, you don't always see the full damage to trees right away because the trees may not be leaning or showing immediate signs of distress, so people often don't notice what's happened," said Sutherland. "Once the tree limbs are bare, you can see things such as a split in the trunk — most likely from the storm, and then we need to come back to the property, do an assessment on the tree and make a recommendation on how to move forward."

Wright Outdoor Solutions wasn't the only company that got right to work after the storm passed through the area. Shores and the crews of Elder Corporation immediately started up their Vermeer HG6800TX horizontal grinder and started processing storm debris for area municipalities.

"Once people could get the downed trees to the curbs, we were hired by several cities to haul debris away and grind it," Shores said.

He added that because of the size and scope of the storm, there was a lot of damage to deal with in a very short amount of time — something that would have been hard for him to comprehend if he hadn't seen it firsthand.

"In Slater, Iowa, within a few days of the storm, the debris pile was roughly three blocks long, 50 feet to 70 feet wide and about 30 feet tall."

Shores said his crews mobilized their equipment fleet immediately, using wheel loaders to pick up and move the material into piles near an excavator with a grapple attachment that fed the Vermeer horizontal grinder. They kept production running night and day until the pile was done, producing a large chip pile of 7-in. sized mulch.

The company also worked on a large pile of storm debris in their hometown of Pleasant Hill. Using the same equipment fleet, Shores estimated they processed more than 10,000 cu. yds. of debris in days.

According to Shores, the Vermeer Damage Defense system on the company's grinder has been a valuable feature in helping keep up his crews' productivity high during events like the derecho because they can adjust the sensitivity of the Vermeer system to match the application in which the grinder is working.

"As an operator, when you're grabbing material out of a pile to process, you can only see the top of the debris — but sometimes, stuff has been thrown in there that's not wood waste. In Muscatine, Iowa, for example, there was an engine crank in the middle of this pile, and we didn't know it. That's a pretty big chunk of steel. The Vermeer Damage Defense system caught it and kicked it out. It works great."

Shores mentioned that once the company had helped these cities with their initial storm cleanup work, they moved their HG6800TX horizontal grinder to a site where they could haul trees from their regular day-to-day jobs, as well as from the municipalities' storm cleanup efforts, to grind and turn into mulch the company sells.

Throughout the cleanup efforts, both Sutherland and Shores said crews were able to keep up with the work due to the support they received from their local equipment dealer, Vermeer Iowa and N. Missouri, which was ready to get equipment to, as well as lend services to, businesses that were working around the clock to help people recover from the storm.

Brad Croat, branch manager of Vermeer Iowa and N. Missouri, said, "As our customers got to work pulling branches and trees off of houses, cars and powerlines, they needed gear right away. It was a great effort by Vermeer manufacturing plants, our branch managers and our dealership teams to get as many mini skid steers, grapples, brush chippers, stump cutters and horizontal grinders from the factory and our yards out into the field as quickly as possible — our customers needed this equipment to help their customers."

Croat mentioned that his customers needed ongoing support from the dealership during continued cleanup efforts, not just during the first days after the storm.

"Right out of the gate, it's all-hands-on-deck to help our customers get the initial clearing done, like getting roadways opened back up and powerlines cleared off so utility workers can get in.

"After that, it's weeks of people moving storm debris out to the curbs to be hauled off and handled. This means contractors like our customers aren't just processing the debris right away, but they also are stockpiling a lot of it up somewhere to deal with once things calm down a bit. So, it's important we're available to them throughout the entire cleanup effort, not just during the initial burst of work."

Because the dealership serves customers in the storm-stricken Midwest, Croat said the company takes great care to proactively stock up on parts for equipment out in the field to help make sure maintenance needs are addressed right away. It also has additional equipment in stock and ready to rent out when customers need to supplement fleets during peak of work. He said the dealership's product support team also makes themselves available 24/7 to addresses any equipment issues that pop up.

"Whether you offer residential and commercial services like Wright Outdoor Solutions, using Vermeer mini-skid steers to get in and out of properties to haul debris to their Vermeer brush chippers; a larger contractor like Elder Corporation, operating bigger Vermeer horizontal grinders to process a city's debris; or an equipment partner like Vermeer Iowa — customers need to know we're there for them through every part of the work," said Croat. "That's true with any kind of project, but it's especially needed during storm recovery efforts — when the speed of response, from the factory to the field, is critical to helping get people back to normal as quickly as possible."

(This article was reprinted with the permission of Vermeer.)