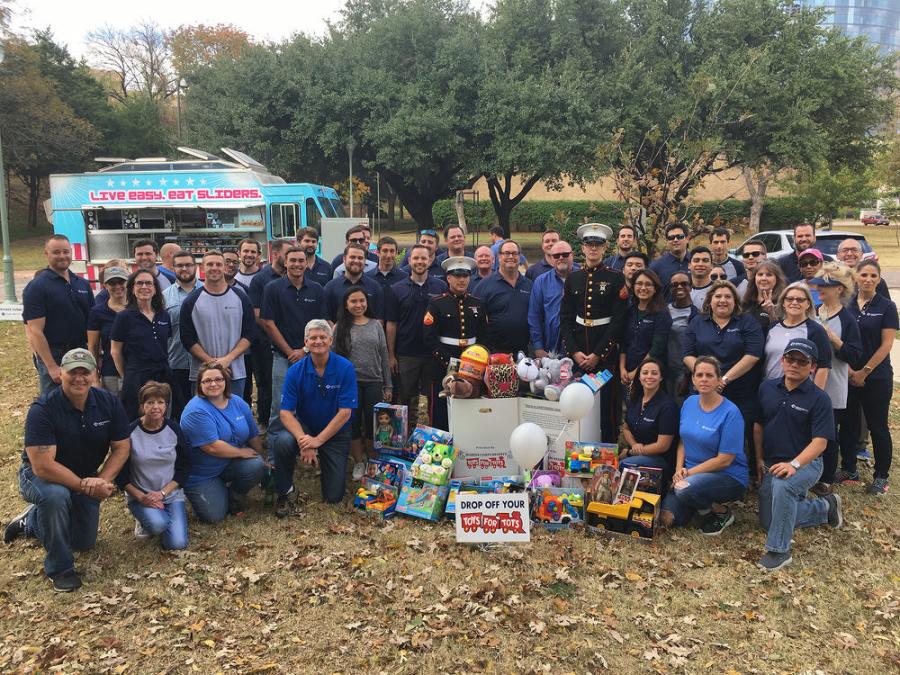 Nearly 80 employees took part in the walk, and the group collected boxes of toys for Toys for Tots. (Structure Tone Southwest photo)

On Nov. 17, nearly 80 employees from the Dallas office of Structure Tone Southwest walked a cumulative 40 mi. to support Toys for Tots and to cap off a year of giving back to the North Texas community.

Throughout 2017, Structure Tone Southwest committed to doing “40 Good Deeds” to celebrate its 40th anniversary. The group volunteered their time toward everything from cleaning horse stalls for Wings of Hope and giving blood to Carter Blood Care to sorting food for the North Texas Food Bank and climbing the Reunion Tower for Wounded Warriors.

As part of today's 40-mi. walk, representing the company's 40 years of business, representatives from the United States Marine Corps joined the group to collect their annual Toys for Tots donations. The toy drive marks one of the company's final “good deeds” in the year-long effort. In total, employees have logged more than 600 volunteer hours and run or walked more than 80 mi. for charitable causes.

“We wouldn't be able to celebrate 40 great years of doing businesses without the support of our community,” said Joseph Cribbin, Structure Tone Southwest president. “We wanted to ensure that as we celebrated our hard work and success, we also gave back to the those who aren't as fortunate. We're thankful to have such amazing support from our employees who gave their time, money and efforts throughout the year.”

Since its first major project in 1977 — 10 floors for Mobil Oil in the First International Building — Structure Tone Southwest has been building projects of all types, from the new corporate offices of firms like RealPage and State Farm to new buildings such as Stryker's new headquarters and many of the large-scale data centers under development across the region. The firm is currently building the AmerisourceBergen campus in Carrollton and the CyrusOne data center campus in Allen.