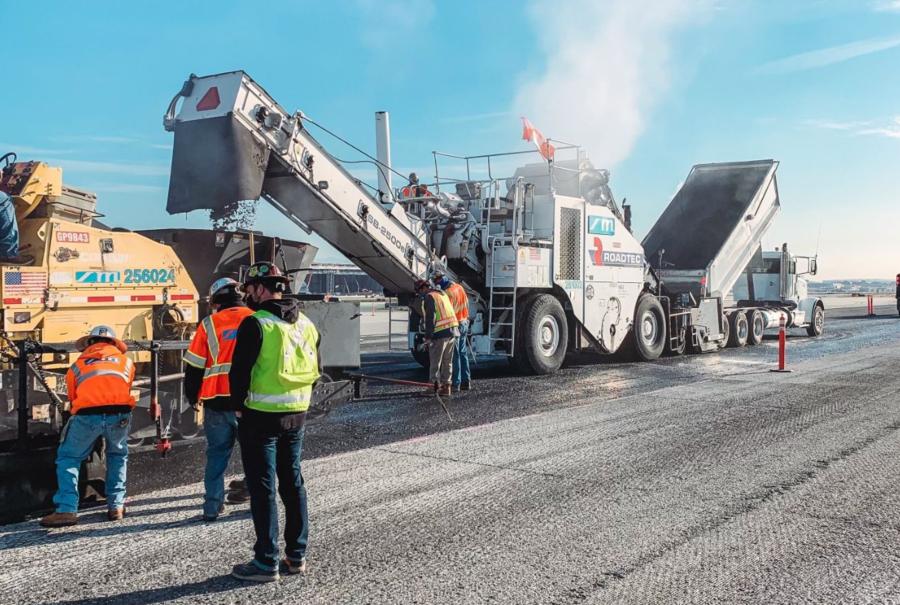 Construction crews from Sully-Miller Contracting Co. were responsible for rehabilitating runway 7R/25L at the Los Angeles International Airport. The runway project covered apprximately 7,000 of the 11,000-ft. runway and the two high-speed exit taxiways.

Officials at Los Angeles International Airport (LAX) are sticklers for quality runways. They have to be. As one of the busiest airport in the world, the facility served more than 88 million passengers in 2019 with an average of 700 daily flights to 113 destinations in the U.S. and 1,200 weekly flights to 91 markets in 46 countries on 72 commercial airlines.

When it was time to rehabilitate runway 7R/25L, the airport turned to Sully-Miller Contracting in Brea, Calif., for the work. Sully-Miller does all manner of infrastructure work but specializes in airports having completed projects in 25 airports in the state. 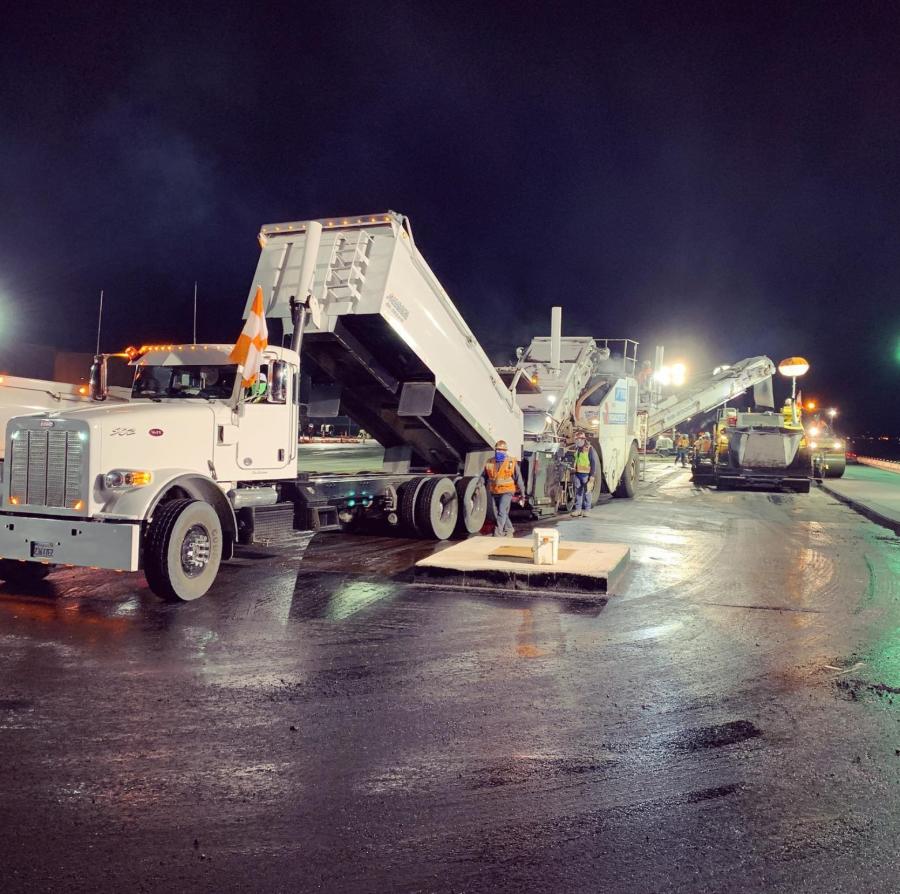 Bernardo Gogna, chief development officer of the airport, said, "Los Angeles World Airports is working constantly to find efficiencies in our modernization and maintenance. The rapid rehabilitation of Runway 7R/25L shows our capacity to work smarter, while minimizing the impact on the airport."

Sully-Miller completed the two-month project on time at the cost of $17.37 million. The runway rehabilitation covered approximately 7,000 of the 11,000-ft. runway and the two high-speed exit taxiways. Taxiways are paved roadways for aircrafts to use to get to the runways.

The contractor had just completed a $100 million project on taxiway P at LAX before starting on 7R/25L.

For 7R/25L, the pavement team used 15,000 tons of a P-401 asphalt mix as mandated by the Federal Aviation Administration (FAA). While a typical freeway construction might call for an open graded friction course to keep rainfall off the road, this project required the contractor to make perpendicular saw cuts 1 to 1.5 in. apart in the new asphalt to channel water off the runway.

The major challenge for Clausen and his crew was to remove approximately 3 in. of asphalt that was laid over a 16-in. concrete base. "The concrete base had failed and was quite difficult to work with," said Clausen. "In many cases, the base had cracks in it which had to be repaired first or they would eventually reflect upward and degrade the new asphalt pavement we would place on top."

"We used a fine sand asphalt slurry to repair the cracks," said Clausen. "When we applied the new hot-mix asphalt on top, this mixture would not bubble up like standard crack fillers or rubber might. The asphalt slurry simply became a part of the body of the runway pavement."

"The new lights had to be installed at the exact orientation as before," said Clausen. "This will help ensure good visuals for the pilots as they make their landings."

Sully-Miller ran two crews for two shifts per day but did not do any night paving. "We wanted to meet all the quality control requirements, especially on smoothness, said Clausen. "We thought that would be done best during daylight hours." 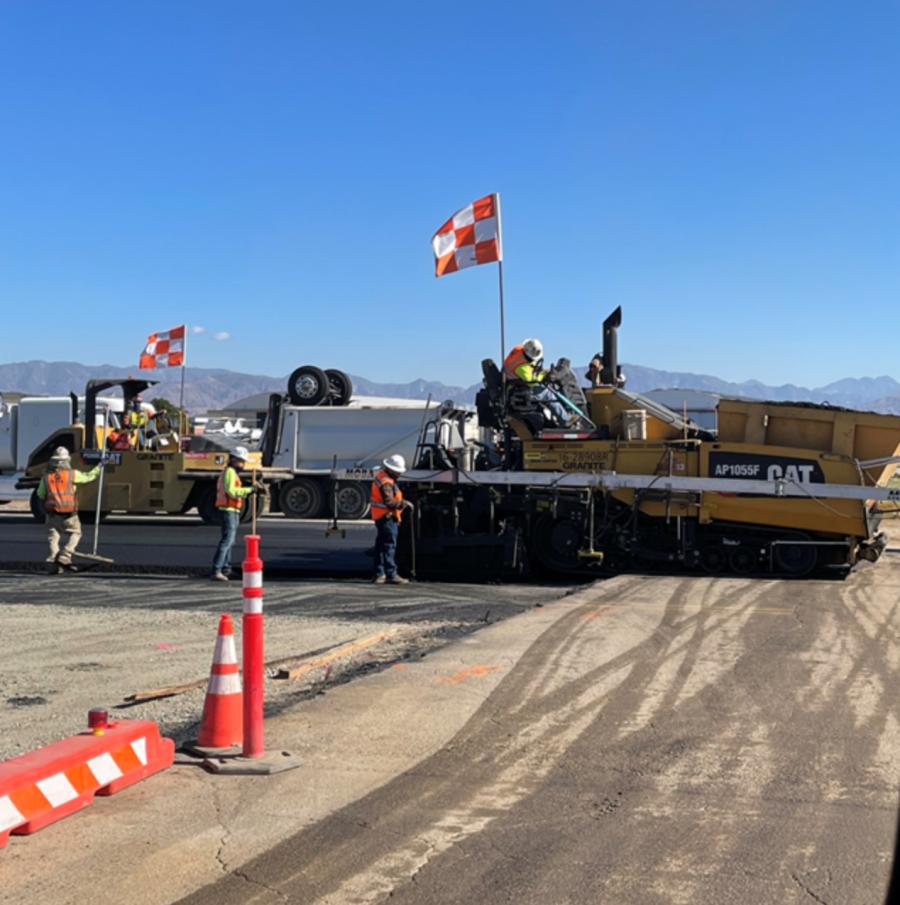 Another requirement was to keep the runway clean of rock that might otherwise get sucked up into the jet engines of airplanes. Sully-Miller had a vacuum sweeper running 24 hours a day to remove any possible debris. This included a section where the work crossed a live runway.

LAX's environmental constraints also challenged the crew. In order to meet some of the guidelines, the paving team faced more stringent exhaust guidelines than in a normal job. The equipment team's adjustments included switching to biodegradable fuel and using propane-powered sweepers.

Sully-Miller owns three asphalt plants and an aggregate quarry not far from the airport. Producing quality asphalt for the job was not a problem. However, getting the product to the runway for paving was not simple. Anyone who has driven in Los Angeles knows the traffic can be abominable. Trucks arriving at LAX also faced heavy security even with their own construction entrance. Trucks usually had to be escorted in and badges checked. This process could take an hour, creating another strain on the logistics of the operation.

Achieving a high degree of smoothness was another important requirement that the Sully-Miller team met. "We had a pavement profiler on location at all times so we could make minor adjustments on the fly," said Clausen.

"Our team can't wait to go back and do more runways at LAX," said Clausen. "We love the challenge of getting things done right and getting them done on time." CEG