Terex Crane Helps Refinery Get Back to Work 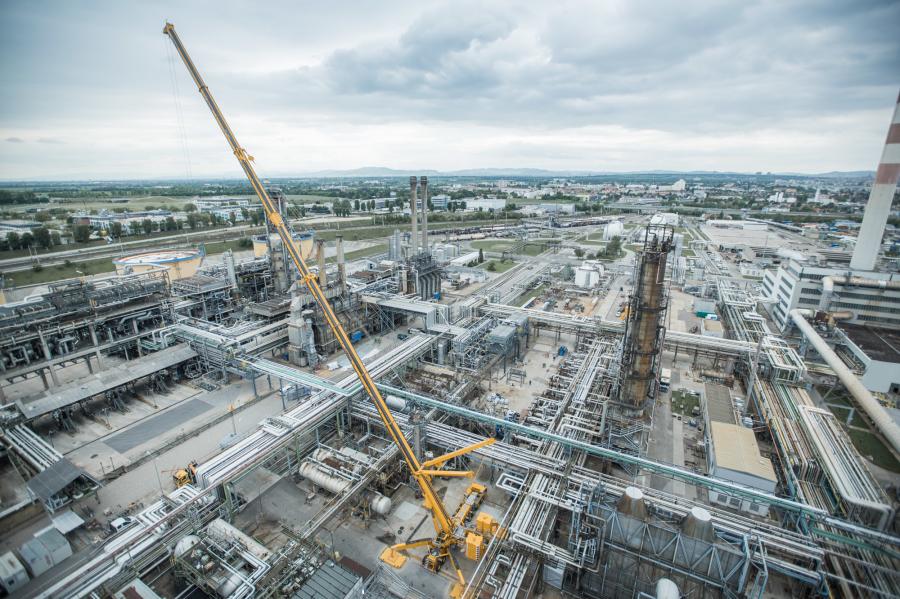 Austrian crane service provider Prangl relied on the capabilities of its Demag AC 1000-9 all terrain crane to replace the 13-ton top section of a fractionating column at an Austrian refinery.

A series of maintenance activities at the OMV refinery in Vienna required for the 13-ton top section of a fractionating column to be replaced. For this challenging task, which required ample planning expertise, OMV commissioned Austrian crane service provider Prangl, which relied on the capabilities of its TerexDemag AC 1000-9 all terrain crane for the job.

"Whenever production operations have to stop at a refinery, it costs a fortune. This meant that, no matter what, we had to avoid delays when lifting the top section onto the fractionating column at the OMV refinery in Vienna," Christian Fida, project manager at Prangl, said. Accordingly, the Prangl team left nothing to chance and planned out the project with utmost meticulousness. While doing so, they quickly determined that choosing the crane that was best suited to the job would be crucial in ensuring the project's success.

"Sure, the available space would have been enough for a smaller crane with luffing jib, but we would have had to set up a long section of the lattice part over a pipe rack. After analyzing in detail the two possibilities, we opted for the main boom solution," Fida said. In other words, the only choice left was a larger model. But it had to be one with enough lifting capacity to lift the load to the required height of 70 meters while still maintaining an adequate safety reserve. And at the same time, it had to be maneuverable enough to move through the labyrinthine refinery with its numerous pipelines. "That meant that we had one choice and one choice only: Our Demag AC 1000-9, as it was the only crane that met both conditions in their entirety. The AC 1000 is our biggest telescopic crane, as well as one of the most powerful cranes in the world. That's why we had it come from its previous work location in Hamburg all the way to Vienna without further ado," Fida said.

The AC 1000 was also able to shine at the refinery thanks to another one of its characteristics – namely, its ease of assembly. The Prangl assembly technicians had come up with a setup strategy that took advantage of precisely this characteristic: First, they pre-assembled the crane with the 100-meter telescopic boom, Superlift system plus winch frame, and four outriggers in front of the refinery gates, after which crane operator Heinz Schuller maneuvered it underneath two pipe racks and all the way to the designated crane setup location. Once there, the 188-ton counterweight was added and the outriggers were extended fully. With this configuration, the crane was ready to lift the top section, which weighed 13 tons together with the slinging gear being used, to a height of 70 meters with a radius of 60 meters so that it would be possible to install it on the fractionating column. "With that configuration, I would have even been able to lift 3.5 tons more, which means we had more than enough capacity reserve for the refinery job," points out Schuller, who believes that the machine was the perfect choice. "The AC 1000 is characterized by enormous precision and a colossal lifting capacity. This combination has proven to be invaluable time and time again when difficult project conditions are involved, as is often the case at refineries and other industrial facilities."

"It couldn't have gone any better!"

The lifting strategy went off without a hitch both for the Prangl team and for the refinery: By combining professional planning with the right machine and a highly qualified team, the company was able to successfully complete the lift on time and without any delays. Even the weather was perfect, so the saying "fortune favors the bold" really applies. In fact, Christian Fida's closing statement reflects the positive outcome: "It couldn't have gone any better!"