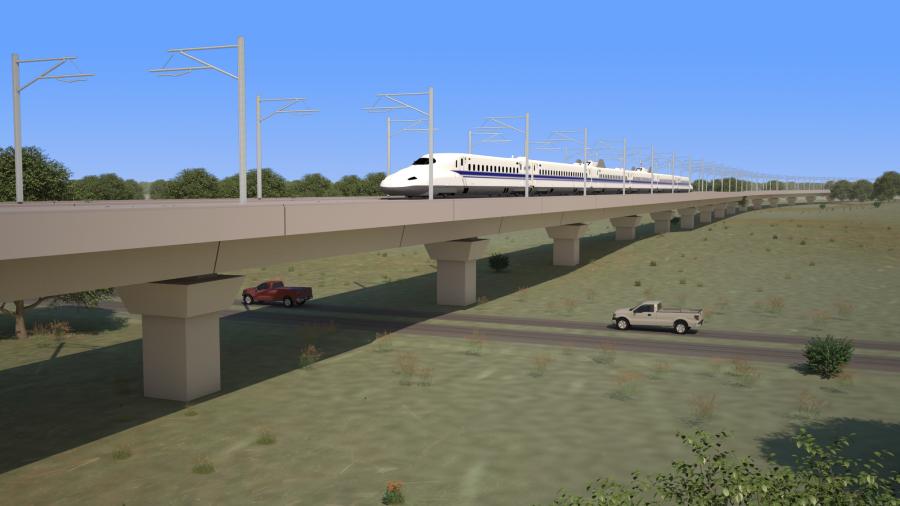 Texas Central, Fluor and Lane will be working together on refining and updating the project’s construction planning and sequencing, scheduling and cost estimates, procurement and other design and engineering activities related to the civil infrastructure. (Texas Central photo)

Texas Central, developer of the investor-owned high-speed train project, announced an agreement with Irving, Texas-based Fluor Enterprises Inc., the primary operating subsidiary of Fluor Corporation and The Lane Construction Corporation, a wholly owned subsidiary of Salini Impregilo, as the project moves into its next phase.

Texas Central, Fluor and Lane will be working together on refining and updating the project's construction planning and sequencing, scheduling and cost estimates, procurement and other design and engineering activities related to the civil infrastructure.

The announcement marks a significant step in the development of the innovative multibillion-dollar project — a 240-mi. line that will connect North Texas and Houston in 90 minutes, with a midway stop in the Brazos Valley.

Under the agreement, after the development phase and financial close, Fluor and Lane would be the preferred design-builder of the project.

"This underscores the attention the Texas Bullet Train has received from world-class firms, wanting to be part of a project that will revolutionize travel here and generate long-lasting local economic benefits," Texas Central CEO Carlos Aguilar said.

"We are excited to partner with firms that have deep Texas roots. This is the latest in a long list of Texas-based companies helping build the train, including Freese & Nichols, Contract Land Staff and Survey and Mapping," Aguilar said.

He said the investor-led project, which is not taking federal or state grants for its construction or operations, wanted a partnership familiar with Texas, focused on creating jobs and opportunities here.

Fluor has expertise designing and constructing high-speed train infrastructure, along with a record of accomplishment on large, complex civil construction projects for more than 100 years. Lane has more than 125 years of experience in leading heavy civil construction projects, specializing in highways, bridges, rail, metro and mass transit, airport systems and power and energy projects.

"The ramp up on the design and engineering reflects continued progress for the high-speed train. This is a major milestone for a project that links two of the nation's largest commercial hubs and gives Texans a safe and reliable alternative over congested highway and air travel," Aguilar said.

"Fluor's global expertise in developing the world's largest megaprojects, matched with its ability to provide integrated solutions to clients across the globe, position the company well with Texas Central," said Hans Dekker, president of Fluor's infrastructure business line. "We will use our industry experience and proven track record of delivering high-speed rail projects to provide high-value services for this significant infrastructure project."

Texas Central said Fluor and Lane have no equity or ownership stake in the project and will not be involved in land acquisition.

"This will be America's first true high-speed train, and we're eager to be part of the next generation of sustainable infrastructure. The project will create benefits for generations to come while providing an innovative transportation alternative for Texas commuters," said Robert E. Alger, president and CEO of The Lane Construction Corporation.

Lane has been working in Texas continually since the early 1980s. Among its Texas projects, it is leading a $300 million design-build joint venture to construct managed lanes on SH 360 from Interstate 20 to U.S. 287 south of Arlington; extending runways and taxiways at Ft. Worth Alliance Airport; and reconstructing segments of Interstate 35 in North Fort Worth, Waco, Austin and San Antonio. The signature Brazos River Bridges on I-35 in Waco won the 2014 Engineering Excellence Award. Lane also is a joint venture partner on the $1 billion I-35 Express project from Dallas to Denton.

Its parent company, Salini Impregilo, has substantial experience in high-speed trains in Italy with the Bologna-Firenze, Milano Torino and current Milano-Genova lines, as well as in other countries. They are currently active in the construction of metro systems and railway lines such as the Red Line in Doha (Qatar), one of the largest infrastructure developments in the Middle East; Line 3 of Riyadh's new metro (Saudi Arabia); and Cityringen, Copenhagen's new metro (Denmark). 3

In Texas, work is advancing on the high-speed train every day, preparing the environmental assessments, engineering and other areas. The Federal Railroad Administration (FRA) continues to work on an Environmental Impact Statement (EIS), which will help determine the project timeline and final route.