The $54 million project is intended to replace an aging swing bridge, but because of its elegant design, it also will give motorists, bicyclists and pedestrians a sweeping view of the ocean. 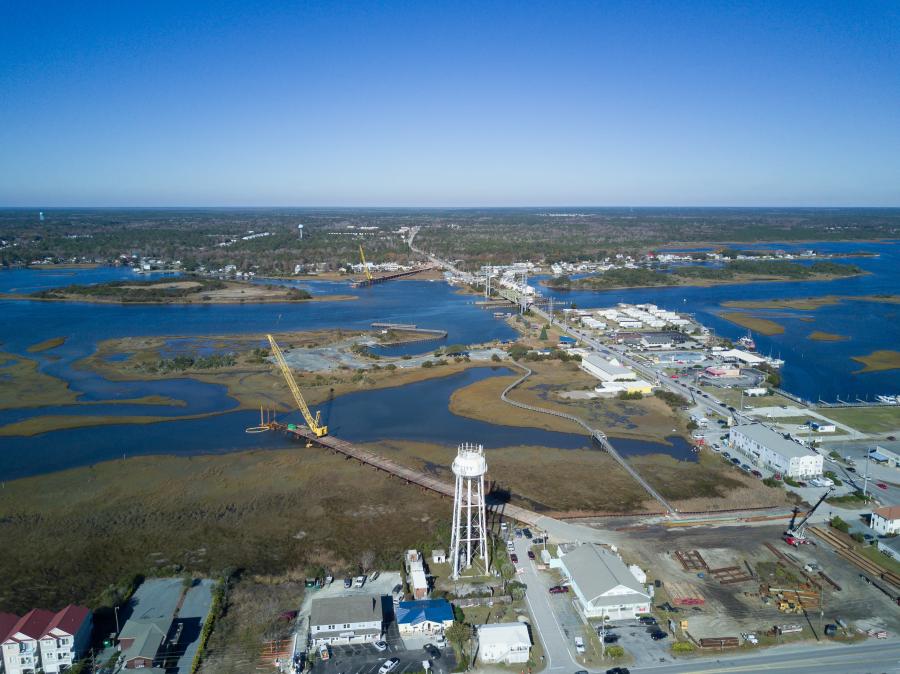 Work is in its early months on a sparkling new bridge being built across the Intracoastal Waterway along the southeast North Carolina coast at Surf City.

Work is in its early months on a sparkling new bridge being built across the Intracoastal Waterway along the southeast North Carolina coast at Surf City.

The $54 million project is intended to replace an aging swing bridge, but because of its elegant design, it also will give motorists, bicyclists and pedestrians a sweeping view of the ocean as they come into town.

The Topsail Island Bridge Replacement project in Pender County began construction this past September, with a scheduled completion date of Sept. 15, 2019, according to Trevor Carroll, the NCDOT engineer keeping watch on the work. The bridge brings traffic to and from the island along N.C. Highway 50/210 south of Jacksonville and Camp LeJeune.

The design of the new, 3,773-ft. (1,150 m) Topsail Island bridge calls for the roadway to reach a 65-ft. (19.8 m) high clearance over the water at high tide as it curves from the mainland across the channel and over a beloved public park before gradually moving traffic to near sea level on the island.

At the island end of the bridge, traffic will move onto a new three-legged roundabout designed to ease congestion during the area's busy summer months.

The look of the bridge is simple, graceful and almost totally in sync with the natural beauty of the popular barrier island.

The new Topsail Island bridge project will be made up of two vehicle lanes, each 12 ft. (3.7 m) wide. There will also be a 10-ft. (3 m) multi-use path on the bridge's north side that is separated from cars and trucks by a concrete barrier. In addition, a 7.5 foot (2.3 m) wide bicycle lane/shoulder is included in each direction.

Interestingly, in the event of a hurricane, the entire 39-ft. (11.9 m) roadway width can be reconfigured for an alternate evacuation route. If needed, it would offer two lanes off Topsail Island and one back on.

With its high water clearance and 120 ft. (36.6 m) between foundations over the channel, watercraft should move smoothly underneath the bridge. And, unlike the old swing span, vehicle traffic will not need to be stopped whenever boats move down the waterway.

The long-gestating project went through a number of community and environmental reviews before the current design was approved. For instance, among a number of goals reached with the current plan was to cut down on the number of residential and business relocations needed at the site and to eliminate the impact on ponds, streams and wetlands.

Construction is progressing on the new structure about 1,100 ft. (335 m) south of the old bridge to install permanent caissons for the shaft drilling that is set to begin soon. Drilling should continue the rest of the calendar year to put in the bridge's foundations, Carroll said.

Balfour Beatty Infrastructure is the project's prime contractor and is readying the caissons. A sub-contractor, A.H. Beck Foundation Co. in San Antonio, Texas, is being brought in for the drilling.

Carroll explained that the Topsail Island Bridge is relying on the drilled shaft foundations over pilings due to the fact that the area is made up of two layers of limestone at different depths in the soil.

“Instead of trying to drive the piles through those two layers, we feel we can get the bearing needed by drilling through those layers for each shaft,” he added.

Carroll also said that when A.H. Beck and its crews arrive at the work site, they will be using a specialized drill rig made by Hydraulic Performance Machines (HPM), an Italian manufacturer. In this case, a powerful HPM 250 will be utilized, a machine that has a rotary torque of 185,000 lb. ft.

“We will not work on the approaches to the bridge this year, but I feel sure the shaft work will be done,” Carroll said. “Balfour Beatty will wind up doing some other structure work in 2017 and, in the fall, we will do some major overhead utilities relocation.”

Carroll said the work is ramping up in the spring at the site.

Although the old swing bridge from the mainland to the island served the area well since 1955, Carroll said that everyone in the area knew that its useful life was reaching the end.

“Well, it is in deteriorating condition, but it is still safe for the traveling public,” he said. “I would say it is functionally obsolete and it causes a lot of traffic backups. Also, since it is a movable steel structure, those pieces that help drive that movement wear out and need replacing.

“But what we are building now is designed to improve on what the old bridge gave us and will be built to last for several future generations.”—CEG