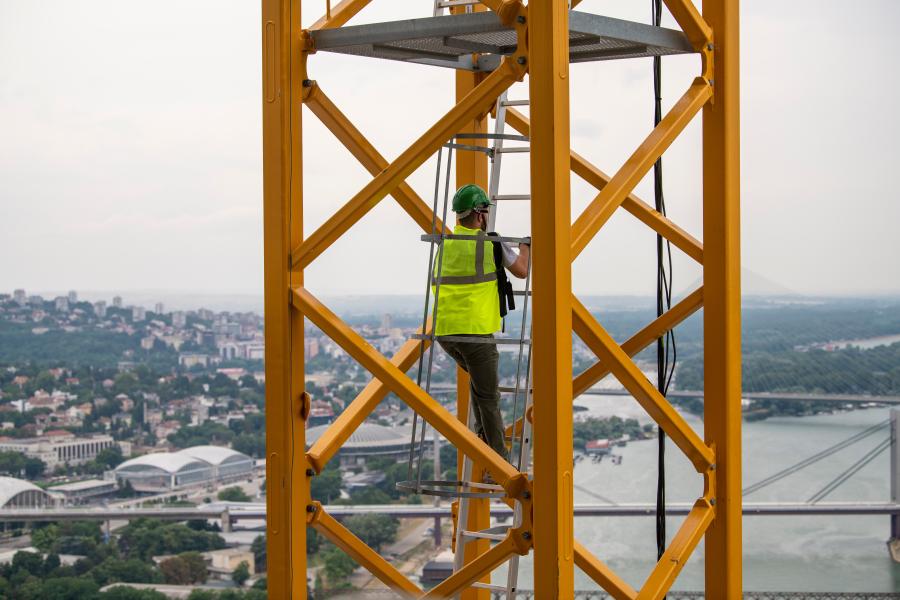 Safety is key when any crane is on a job site, but a tower crane requires safety managers to have a rescue plan in place. A medical emergency can occur any time on the job, even to a crane operator in a tower crane cab. Many crane companies make rescue training sessions a regular part of their safety training programs. And many will get the local fire and rescue team involved.

This summer, Bigge Crane and Rigging teamed up with the San Francisco Fire Department for field training exercises that included rescue instruction.

"The well-being of everyone around our jobs and equipment  is an indication of our commitment to safety," the company said about the field training. "It's important to us as an organization that we express safety as our number one core value day in and day out."

The training, according to the company, replicated a tower crane medical emergency and the subsequent 911 call to the fire department's heavy rescue unit.

"As a result of this exercise, firefighters and first responders gained invaluable insight into the operational function of a tower crane," said the crane company.

Rescue routes in and out of the site, and a briefing on the project's emergency action plan (EAP) were part of the session.

The EAP explains the functional roles of construction personnel during such an emergency.

"Our aim is to inspire others to follow the steps we've taken to plan and implement mock rescue scenarios on their sites," said Bigge. "The crane operating company, emergency responders and site personnel then use that information to prepare for such emergencies effectively and save lives."

Having the Right Stuff

When the tower cranes go up, so do the operators, and more operators requires a heightened sense of awareness around the job site.

Doug Legg, service and training manager of Rubicon Safety, Ontario, Canada, urges employers to be aware of their requirements.

In Canada, contractors must consult the Occupational Health and Safety Act (OHSA). In the United States, contractors turn to OSHA, but there are state and local regulations that must be followed as well. 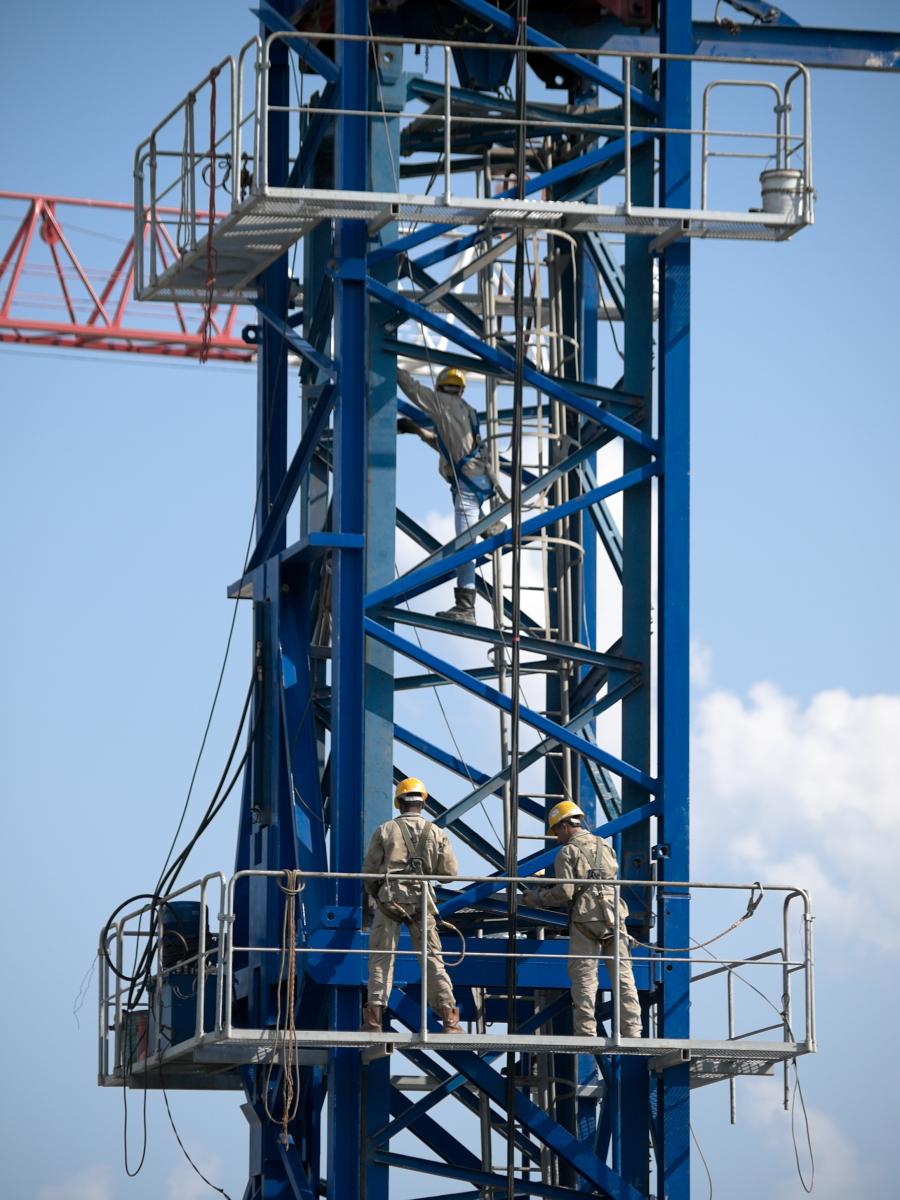 It also is important to tailor the training to the crane in use because there are many different types of cranes, Legg told Canadian Occupational Safety magazine.

"There are different styles and different types of tower crane, so some are easier to work on than others," he said.

And not only does the work require rescue training, but the ability to climb, and the ease of rescuing another person at height in a confined space.

"Can they manage their emotions?" asked Legg. "Because you've got to be able to temper your emotions in those times."

"Precious minutes are often lost while people on the ground try and fail to repeatedly contact an incapacitated crane operator," he said. "Before anyone realizes that something is very wrong up in the cab, the ‘golden hour' for saving a life after a traumatic event is already ticking away."

Construction teams can and should know how to save a crane operator's life, he believes.

Wise said the best time to think about how to rescue someone is long before an emergency actually happens.

Even major cities typically have just one technical rescue team that is capable of handling high-level emergencies.

It can take that specialized team much longer to get there, and first response units rarely have the tools or training for this type of job.

"Meanwhile, someone needs to get up high immediately, find out what's wrong and act to get the victim back down safely," said Wise. "It's extremely important that multiple people on a job site have rescue training."

Wise believes that every job site should include workers who are part of a trained emergency response team (ERT).

"With equipment and a rescue plan designed for the specific crane, the ERT can perform a simple extraction and lowering operation to get an incapacitated operator to medical help faster," he said. "Saving lives isn't as hard as you think."

Here is his advice:

It also covers how to find a safe path down, the importance of communications and how to take care of your rescue gear so it's always ready.

"That may sound like a lot to learn, but high-level rescue does not have to be complicated — especially when operating from a known location using pre-established anchor points and paths of egress," said Wise. "It's about having a plan, sticking to it, acting quickly, having the right gear at the right time and focusing on transferring the victim's weight to the rescue system so that you can lower him or her down."

He believes arming yourself with knowledge and hands-on training in a realistic emergency scenario is key.

"And practice those skills at least once a quarter with a realistic ‘rescue' on an actual job site," said Wise. "Refresh your rescue knowledge frequently, and if you're ever faced with a real emergency, you'll switch into automatic response mode."

He added that then you'll "know exactly what to do to safely assist in a time-sensitive emergency like a tower crane rescue."

Where the Machine Comes In

It's crucial for contractors to understand when it's appropriate to use a heavy piece of equipment in a rescue operation, said Roco Rescue.

"On the practical side, the use of a crane as a ‘stationary, temporary high-point anchor' can be a tremendous asset to rescuers."

But, "because of the dangers involved in moving personnel with heavy equipment, OSHA strictly limits its use," added the Baton Rouge, La.-based company.

The security of the system's attachment to the crane and the ability to lock-out any potential movement are a critical part of the planning process.

Powered industrial equipment to be used as a highpoint must be treated like any other energized equipment with regard to safety.

Personnel must follow proper Lock-out/Tag-out procedures, and any equipment used in rescue should be properly locked out.

Keys must be removed, power switch disabled, etc. "You also need to check the manufacturer's limitations to ensure you are not going beyond the approved use of the equipment," advised Roco. 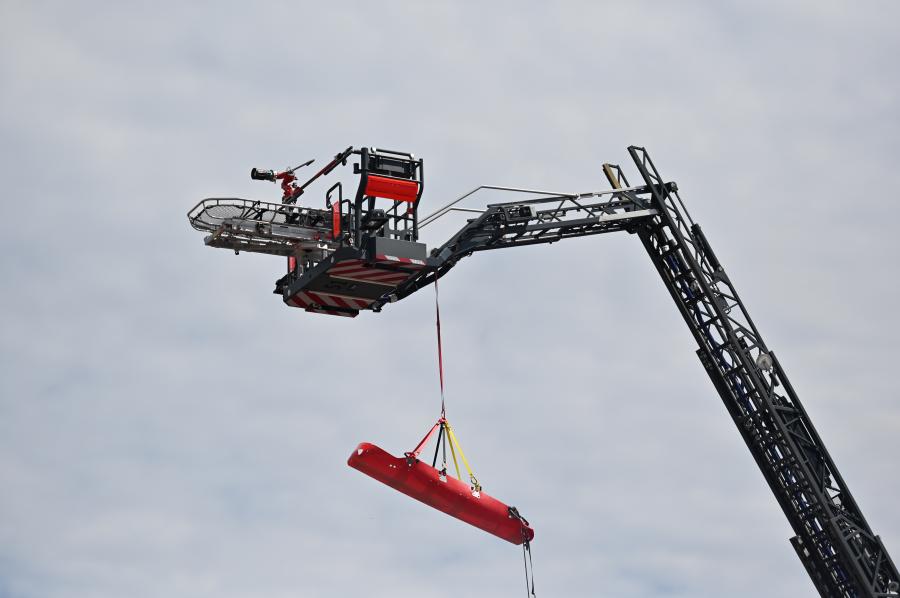 To utilize a crane in rescue, properly rated personnel platforms or baskets must be used. Platforms suspended from the load line are covered by OSHA's crane rule, under 1926.1431.

Because there is no specific provision in the General Industry standards, the applicable standard is 1910.180(h)(3)(v).

This provision specifically prohibits hoisting, lowering, swinging or traveling while anyone is on the load or hook.

"OSHA prohibits the hoisting of personnel by crane or derrick except when no safe alternative is possible," according to Roco. "The use of a crane for rescue does not provide an exception to these requirements unless very specific criteria are met."

Therefore, the hoisting of personnel is not permitted unless conventional means of transporting employees is not feasible, according to OSHA.

That is, unless conventional means present even greater hazards (regardless of whether the operation is for planned work activities or for rescue).

"Where conventional means would not be considered safe, personnel hoisting operations meeting the terms of this standard would be authorized," wrote Roco. "OSHA stresses that employee safety, not practicality or convenience, must be the basis for the employer's choice of this method."

The company notes that OSHA specifically requires rescue capabilities in certain instances, such as when entering permit-required confined spaces or when an employer authorizes personnel to use personal fall arrest systems.

In other cases, the general duty to protect an employee from workplace hazards would require rescue capabilities, said Roco.

"Consequently, being ‘unprepared for rescue' would not be considered a legitimate basis to claim that moving a victim by crane was the only feasible or safe means of rescue."

This is where the employer must complete written rescue plans for permit spaces and for workers-at-height using personal fall arrest systems.

"For rescuers, a crane is just another tool in the toolbox — one that can serve as a temporary, stationary high-point making the rescue operation an easier task," said Roco. CQ