Construction crews from different states work together on a project that is a first for bridge construction. 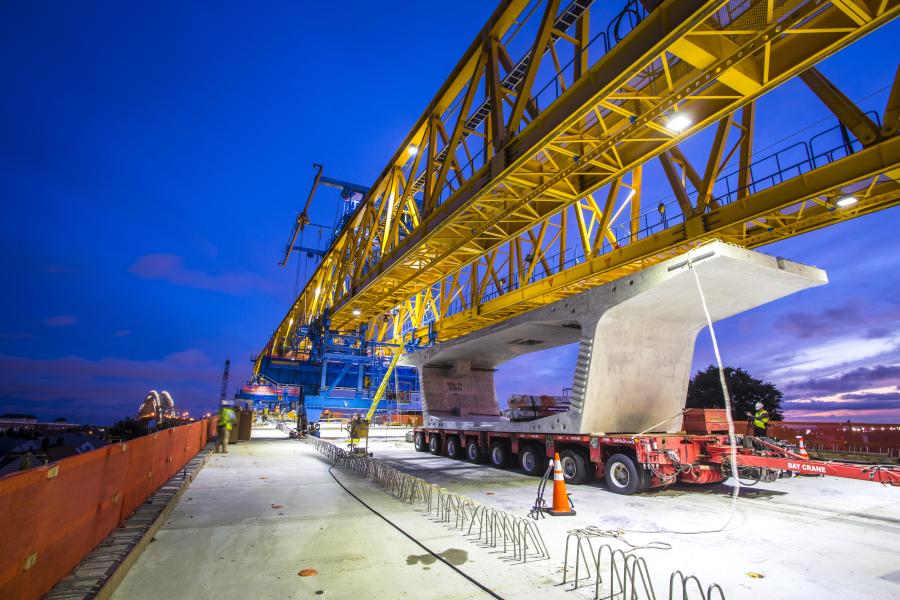 HDR photo One of the two launching gantries at the Bayonne Bridge “Raise the Roadway” project prepares to lift a pre-cast concrete segment.

Construction crews in New York and New Jersey are at work on a project that is a first for bridge construction. Crews in the joint “Raise the Roadway” venture of Skanska Koch/Kiewit Infrastructure are raising the roadway of the Bayonne Bridge from 151 ft. (46 m) to 251 ft. (76.5 m), and they're doing so while maintaining traffic on the original road below.

“The project marks the first time engineers are building a bridge roadway above the original span, even as the lower road continues to carry traffic,” said Neal Buccino, senior public information officer with the Port Authority of New York and New Jersey. “It will maintain the steel arch that makes the Bayonne Bridge a civil engineering landmark, while giving drivers a safer, wider and more modern roadway with 12-foot lanes, new shoulders, a median divider, and a 12-foot bike and pedestrian walkway.”

The $1.3 billion project to elevate the bridge will raise it to the same height as the nearby Verrazano-Narrows Bridge under which container ships also pass en route to Port Newark/Elizabeth and Howland Hook. The bridge opened in 1931 and for 45 years held the title of having the world's longest steel arch, measuring 1,675-ft. (510.5 m).

The feat is made possible in part by the crafting of two custom-made massive pieces of equipment known as “launching gantries.” The machines are 500 ft. (152.4 m) long and 1 million lbs. (453,592 kg) each. Despite the massive size, “they work with finesse and precision, moving the roadway segments into just the right place for human workers to bind them with steel, epoxy and more concrete,” Buccino said.

The gantries generally operate at night when the bridge is closed to traffic. “With their crayon-bold colors lit up in the dark, they seem to have arrived from another world — a Marvel Comics universe, perhaps, or a child's oversized toy bin,” he said.

The contract was awarded in 2013 and is expected to be complete by mid 2019. Navigational clearance at the bridge for the world's largest container ships is expected in late 2017.

The original schedule was set back due to the challenges of the project, along with the harsh winter of 2014-2015.

“The 'Raise the Roadway' project is one of the most innovative and challenging projects the Port Authority has ever undertaken, and will help maintain our position as the East Coast's premier port for international trade,” said executive director Pat Foye.

Michael Cobelli, president and CEO of Skanska Civil Inc. added, “We are confident that we will complete the Bayonne Bridge's 'Raise the Roadway' project within the revised timetable. This has been a challenging project, but we have committed the resources to complete it successfully, with full awareness of how vitally important it is for the regional economy.”

Here, courtesy of the Port Authority, are some facts about the launching gantries:

• The launching gantries haul and install the 70-ton (63.5 t), precast concrete segments that make up the new approach roadways to the new, elevated main span that is under construction at the Bayonne Bridge.

• The launching gantries were custom-designed and built for the “Raise the Roadway” project, due to the varied span lengths and construction methods selected by the project's contractor. Their components can be reused for other projects.

• There are a total of two launching gantries, one to build each of the two approach roadways to the new bridge span. (The roadways are on the New Jersey and New York sides of the Arthur Kill, respectively).

• The launching gantries are remote controlled using a wireless, radio frequency controller. They move using a rack and pinion drive system on top of each truss. Each is outfitted with a main hoist winch to erect the precast segments, and an auxiliary hoist winch for other operations such as post-tensioning.

• They were designed by by McElhanney Consulting Services Ltd. of Tampa, Fla., and manufactured by Handan China Railway Bridge Machinery Co. Ltd. of Handan City, Hebei Province, China. The Handan company designs and manufactures solutions for cast-in-place concrete and precast concrete construction, including machines similar to these two Launching Gantries.

• The joint venture of Skanska-Kiewit assembled, commissioned and owns the two gantry machines.

• Each launching gantry was fully assembled at the manufacturer's facility in China. They were then load tested, disassembled and shipped to the Bayonne Bridge project site. Each of the two gantries was shipped in 24, 40 ft. (12.2 m) sea containers (a total of 48 containers for the two gantries), then re-assembled on site where a static and dynamic load test was performed prior to the gantries being put into service. CEG