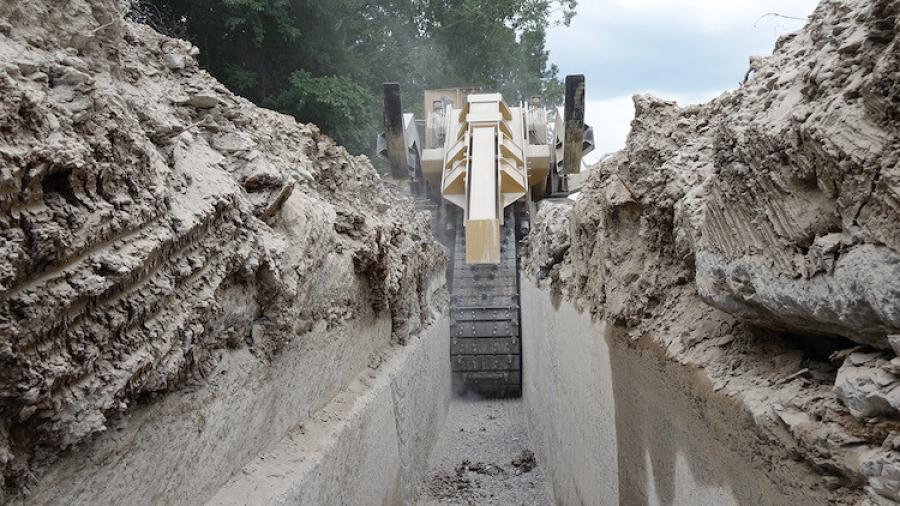 The T14-54/617 trencher pays tribute to the 1400-series with its name. The 54/617 part of the nomenclature refers to its 54-inch-wide maximum-cut capability and its powerful 617 hp, Tier IV Final engine, according to Lee Drugan, marketing manager of American Augers and Trencor.

“The T14 pays tribute to the venerable 1400-series with its name,” said Lee Drugan, marketing manager of American Augers and Trencor. “The 54/617 part of the nomenclature refers to its 54-inch-wide maximum-cut capability and its powerful 617 hp, Tier IV Final engine.”

Trencor 1400-series trenchers, including the most recent, T1460 model, have been the choice of pipeline, utility and surface mining operations for more than 20 years. Many of the first trencher models are still hard at work in the field, according to Jared Bird, Trencor engineering project manager.

“It runs so cleanly that no regen cycle is required. That greatly increases reliability. Its wide rpm range of power output maintains full productivity in even the toughest conditions.”

It also lowers cost of maintenance and total cost of ownership, he said.

The Mercedes engine runs at lower, quieter speeds, yet generates torque rated up to 2,139 ft.-lb. at 1,300 rpm. Benefits of the engine's lower rpm include reduced fuel consumption and noise levels. A new hydraulically driven, variable-speed cooling fan also contributes to improved fuel economy and reduced engine load, according to the manufacturer.

A redesigned T14 undercarriage features an innovative attachment method to a heavier, stronger mainframe. Improved hose routing and use of hard lines add to ease of service, require less frequent maintenance, and contribute to lower cost of ownership.

Safety enhancements include a new digging drive brake and optional cameras in the cab that increase operator visibility of the worksite.

T14-54/617 trencher options include a new quiet pack for running in sound-sensitive environments, such as urban work sites, and a counterweight package that increases the machine's width and depth capabilities.