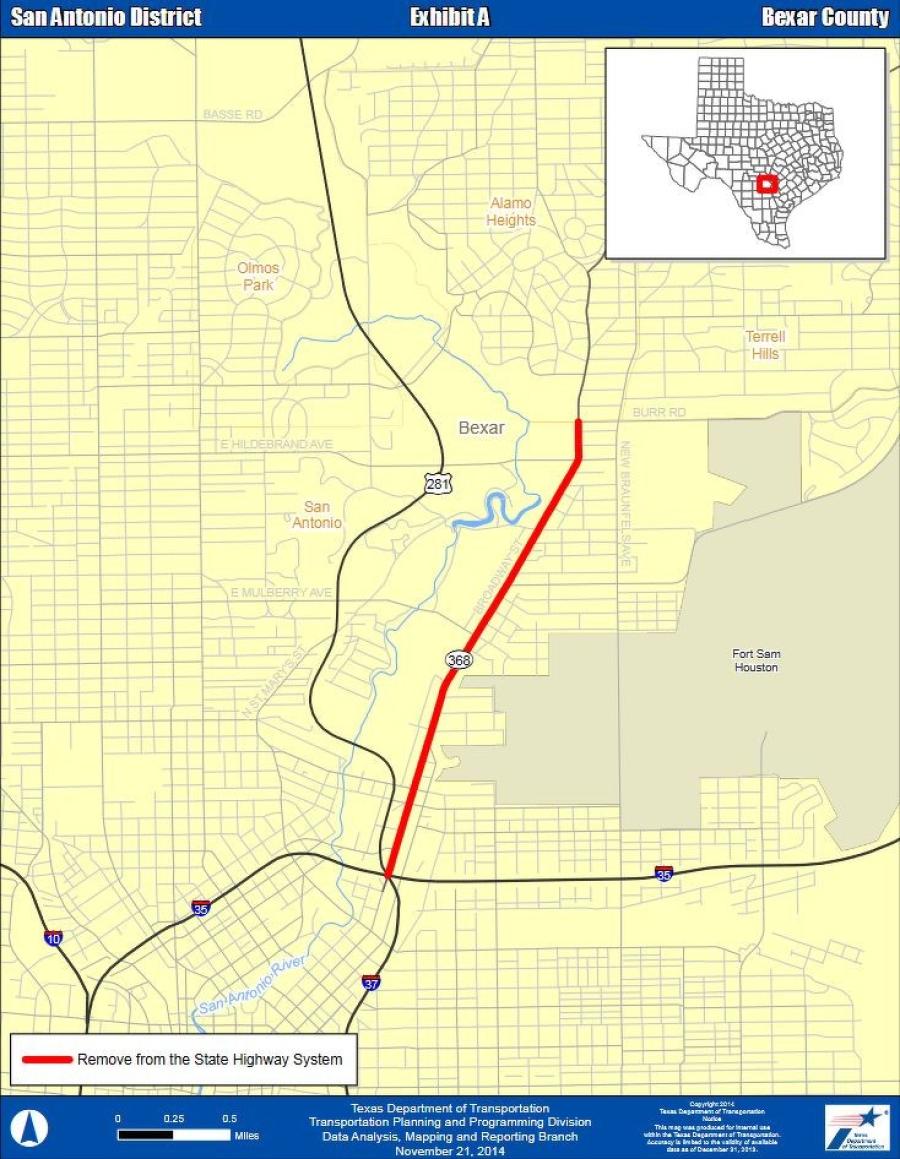 The Texas Transportation Commission (Commission) recently approved maintaining state jurisdiction and ownership of a portion of State Loop 368 (Broadway) in San Antonio, keeping the roadway a six-lane section for vehicles as it was originally built with a finding that the roadway is necessary for the operation of the state highway system. This portion of SL 368 has never been transferred off of the state highway system, but previous action by the Commission in 2014 and 2015 would have potentially transitioned jurisdiction and control of that section to the city of San Antonio once formal acceptance of a completed project was in place. That formal acceptance requires a final project acceptance agreement from TxDOT and then formal transfer of the project through the authority of the governor. These actions have not occurred, keeping TxDOT with responsibility for the roadway and its right of way.

In recent years, the city of San Antonio began plans to accept this portion of Broadway from the state. The city's proposed plans for the roadway would reduce capacity by eliminating one lane in each direction from three to two and eliminating turn lanes. Without submitting the required environmental study for TxDOT approval or providing environmental reports, the City has been advancing final design on the proposal at its own risk.

The latest action by the Commission comes at a time when the population growth rate in San Antonio is projected to outpace the state and transportation leaders are actively identifying and addressing the state's most congested chokepoints. Texas is currently home to more than 29 million people and is projected to grow by 62 percent to 47 million by 2050. In 2020, 2.6 million people lived in TxDOT's San Antonio district and that area is anticipated to grow by 77 percent to 4.6 million by 2050.

A traffic study performed in 2017 estimated that traffic along Broadway would grow 4 percent each year. Compounded annually, this increase would result in traffic volumes growing 40 percent by 2035.

More significantly, congestion along the corridor would dramatically increase as traffic lanes are eliminated, increasing delays for motorists and forcing traffic onto other roadways and into neighborhoods.

"When the Texas Transportation Commission launched the Texas Clear Lanes congestion initiative seven years ago, we made a commitment to the people of Texas to reduce congestion on state roadways, and we owe it to them to make sure TxDOT projects and the use of state property are consistent with that policy," said Commission Chairman J. Bruce Bugg, Jr. "We look forward to working with the City and other stakeholders on finding ways to increase mobility and safety for all users of the roadway, both now and well into the future."

Bugg issued the following statement on talks with the city of San Antonio and the city of Alamo Heights regarding work on Broadway.

Two items emerged from the discussions. First, city leaders acknowledged that Broadway is, in fact, owned by the state of Texas. Second, I am asking TxDOT staff to work with both cities to develop project plans on Broadway that can address mobility and safety for all users of the roadway, while preserving the capacity that exists today."

We said we looked forward to working with the city of San Antonio and the city of Alamo Heights, and as promised, those conversations are now underway.