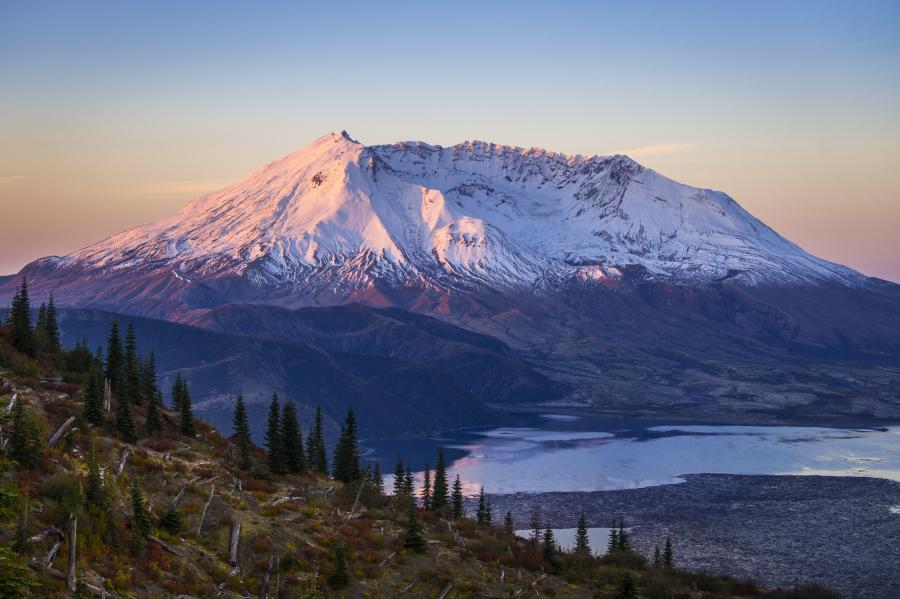 While public safety remains a key concern, they say that other things should be considered, such as fisheries restoration and the intent of congressional legislation "to allow geologic forces and ecological succession to continue substantially unimpeded" in the 110,000-acre Mount St. Helens Volcanic National Monument.

SEATTLE (AP) - Long-term strategies are needed to deal with the risks of mudflows and flooding left behind by the 1980 Mount St. Helens eruption, according to a report by the National Academies of Sciences, Engineering and Medicine.

The most serious threat is at Spirit Lake, which the volcano left plugged by an unstable mass of debris that, if it gave way, would threaten some 50,000 Southwest Washington residents who live downstream.

A drainage tunnel completed in 1985 reduces the chance that the makeshift dam could fail. But the report found that the aging structure, despite repeated repairs, "is not operating optimally," and is still in need of expensive maintenance.

The scientists who put together the report suggest future engineering options, such as building a second tunnel, cutting a spillway through the debris dam or finding a way to drain the lake. They propose a collaborative effort that brings together federal and state agencies, the Cowlitz Tribe, downstream communities and others.

The 1980 eruption killed 57 people when it blew away the top of the mountain and unleashed a massive avalanche of debris, the largest in recorded history. The resculpting of the landscape prompted a $1 billion, decade-long effort to deal with the aftermath of the eruption.

The work included massive dredging and construction on the North Fork of the Toutle River of a sediment retention structure to slow the downstream movement of sediment.

The eruption raised the water level by 210 ft. and blocked its natural outlet with a mix of ash, earth, rock and other materials. With no way to drain, the water level could climb still higher. This would increase the chance of a breach of the debris dam, a potentially cataclysmic event that could send some 314,000 acre-ft. of water and 2.4 billion cubic-yds. of sediment surging down the Toutle, Cowlitz and Columbia rivers.

In 1982, a temporary pumping station was installed to lower water levels. This was followed by construction of the tunnel to divert water into South Coldwater Creek.

Since then, the nearly 1.6-mi.-long tunnel has been subjected to repeated spot repairs. The most recent effort completed in March 2016 shored up a 30-ft. section that had narrowed significantly due to ground pressures.

Meanwhile, the Army Corps of Engineers has worked on a long-term plan to limit sediments flowing into the Toutle, Cowlitz and Columbia.

The Corps built the sediment retention structure, which resembles a dam, across the North Fork of the Toutle. In 2012 the spillway of the structure was raised by 7 ft., and it could be raised again in the future, according to Jeffrey Henon, a Corps spokesman in Portland.

The academies scientists note that new engineering projects have ripple effects throughout the drainage. While public safety remains a key concern, they say that other things should be considered, such as fisheries restoration and the intent of congressional legislation "to allow geologic forces and ecological succession to continue substantially unimpeded" in the 110,000-acre Mount St. Helens Volcanic National Monument.

The scientists also suggest re-examining the mindset behind the human intervention. In the early years after the eruption, the big push was to try to keep as much sediment as possible from moving downstream. But they said this material, sooner or later, would make its way downstream. So the focus might shift to trying to engineer an orderly and safe downstream movement of that material.

Some of the biggest decisions involve Spirit Lake and the future of the tunnel, which has an expected life span of about 50 years unless major renovations costing tens of millions of dollars are made.

The U.S. Forest Service participated in an emergency planning exercise in Cowlitz County this past spring that simulated flooding from Spirit Lake.

In the meantime, the Forest Service's work at Spirit Lake includes the installation of a structure to keep floating logs away from the tunnel outlet as well as sensors to help monitor flows.

The Forest Service also is considering opening up a route for all-terrain vehicles to reach Spirit Lake to assist with maintenance. That proposal has drawn concern from some research scientists who say it could disturb their studies within a sensitive area known as the Pumice Plain.

Carri LeRoy, a freshwater ecologist at The Evergreen State College, says the new route could seriously disrupt work there by her and other researchers.

"I am incredibly disappointed to learn that the Forest Service is continuing to push for motorized traffic across the Pumice Plain," LeRoy wrote in an October letter to the agency. Her research examines the formation of streams in the post-eruption landscape, and she urged the Forest Service to consider an alternative route to the lake.

Chris Strebig, the Spirit Lake project manager, said no final decision has been made on the motorized route.

The access question is part of a broader Forest Service effort to chart future management of Spirit Lake. The agency is planning a major outreach effort that will include a series of meetings next year in Southwest Washington.

"We have our work cut out for us," Strebig said.