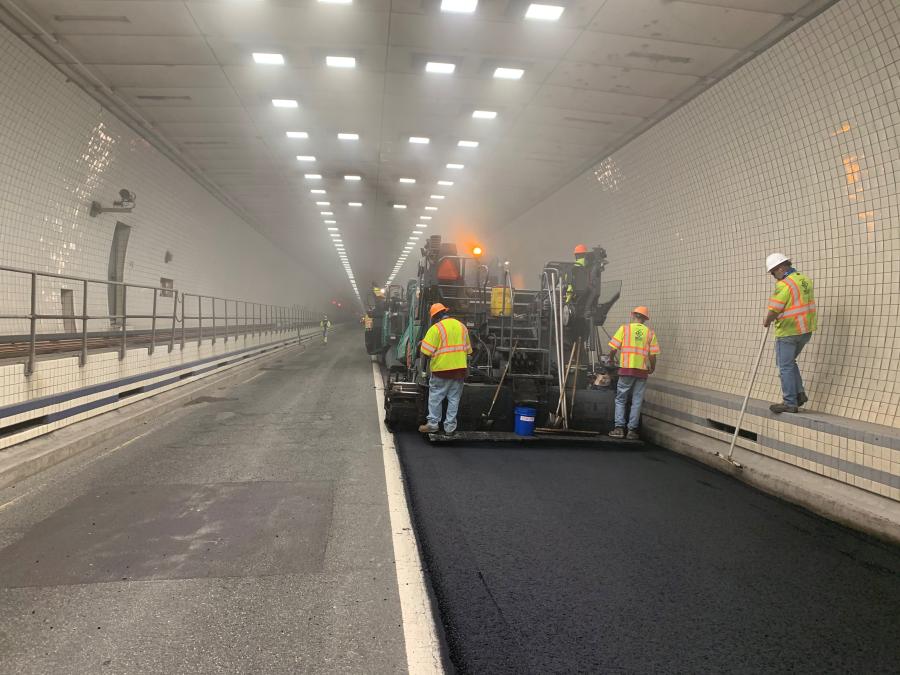 The first lane of the night paving project in the Monitor-Merrimac Memorial Bridge-Tunnel is completed.

The region embraces significant water access to the Atlantic Ocean and straddles the James, Nansemond and Elizabeth rivers. The Hampton Roads area is home to the largest U.S. Naval Base, a regional Coast Guard command and the Port of Virginia. 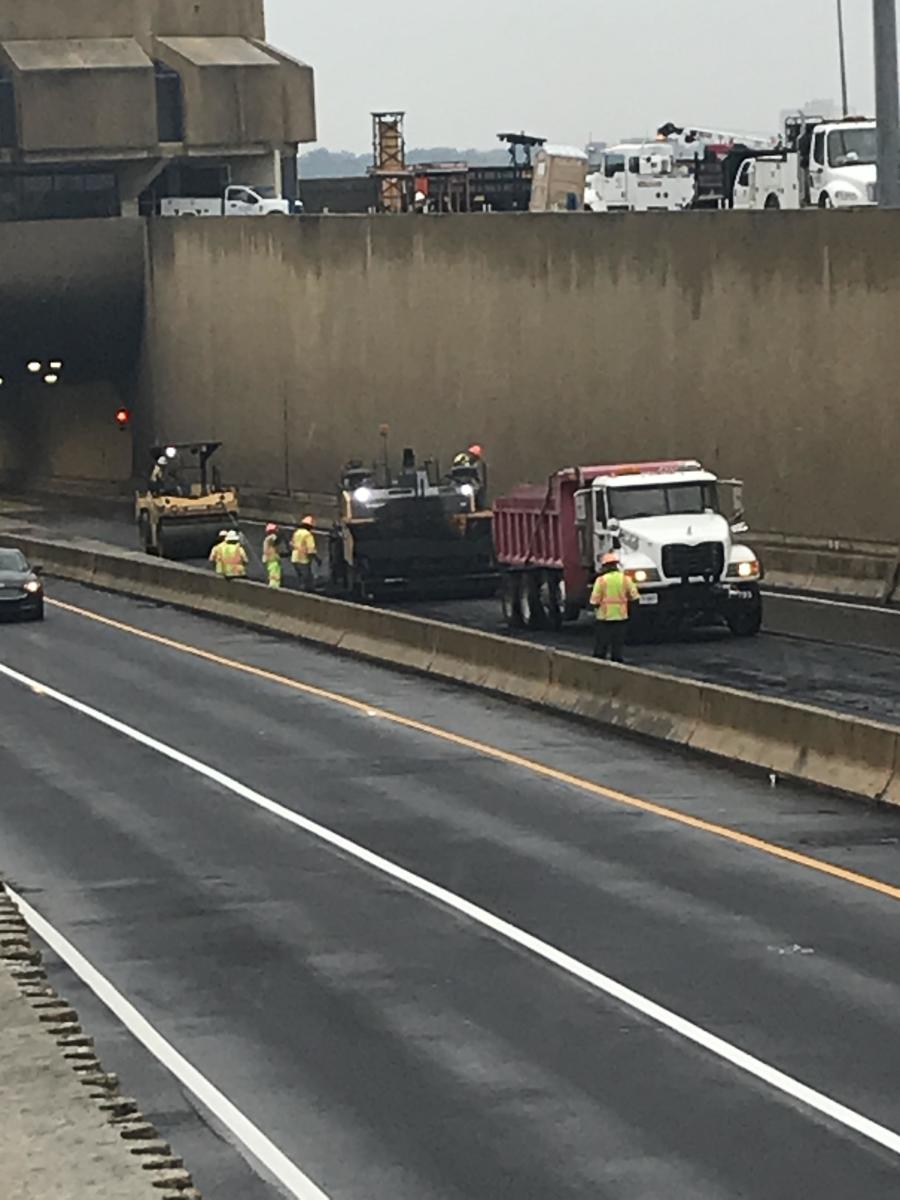 All these activities and the area's multiple shipyards generate a large and diverse volume of maritime traffic. These waters carry aircraft carriers to kayakers and just about everything in between.

Vehicle traffic between these cities, bases and beaches is complex. It requires bridges, trestles, man-made islands and tunnels underneath the water to make it all work. The tunnels enable the large Navy vessels access to the ocean without being impeded by bridges.

The Monitor-Merrimac Memorial Bridge-Tunnel (MMMBT), the Hampton Roads Bridge-Tunnel (HRBT) and the James River Bridge provide a critical transportation link for the region. If trouble occurs on any of the three links, the other two strain to sustain the traffic flow to avoid gridlock from happening. The local infrastructure also includes the Downtown Tunnel in Norfolk, Midtown Tunnel in Portsmouth and Chesapeake Bay Bridge-Tunnel which goes from Virginia Beach to Maryland's Eastern Shore.

Virginia Department of Transportation (VDOT) planners took steps to keep this vital transportation artery active by working with Branscome, a construction firm located in Williamsburg, to repave the MMMBT for the first time since it opened 28 years ago. VDOT contracted with Branscome to shut down traffic first in the southbound two-lane tunnel for paving. Workers then paved the northbound tube. VDOT allowed Branscome four weekends in October 2020 to complete the job. Branscome did it in just two.

Because of the traffic requirements, including an average of at least 3,500 trucks per day, Branscome was required to work between 9 p.m., Friday and reopen to traffic by 5 a.m., Monday. VDOT also inserted an emergency provision requiring the tunnel to open up a lane with just 30 minutes' notice, if needed.

On Sunday night around 11 p.m. during the first weekend of paving, the emergency provision became necessary.

"Branscome was finishing the southbound tunnel entrance when we received a call about a multi-vehicle crash and at least one of the vehicles was on fire in the HRBT," said John Jacobs, district construction engineer, Hampton Roads District. "Our regional operations director requested that the MMBT be opened immediately because we now had two of the three Peninsula to Southside river crossings blocked. Branscome quickly demobilized and got a lane opened to the traveling public."

Branscome immediately rerouted its empty dump trucks onto the opposite lane of the tunnel, exiting the lane on a ramp before the barrier closing the road to the public. This contingency plan enabled the paving operation to continue, although at a reduced rate, until the accidents in the other tunnel were cleared. 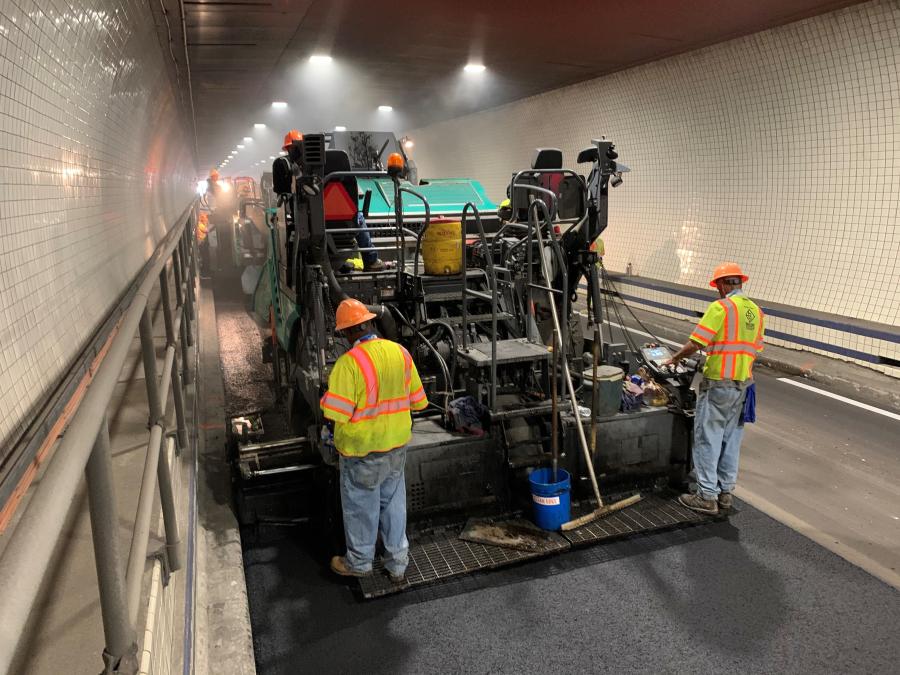 The completed project, approximately 1 mi. in each direction, required milling the top 2 in. of deteriorated asphalt and replacing it with fresh asphalt produced at Branscome's asphalt plant located just over one mile from the project. VDOT paid Branscome $1.5 million for the completed job.

The mix design allowed 15 percent of the road to be recycled materials. Workers used approximately 4,000 tons of asphalt for the project.

The job required workers to contend with numerous obstacles. In addition to working in the tight confines of a tunnel, which restricted the flow of the construction, Branscome workers had to work around manholes, curbs and iron stormwater drains without causing damage.

"Another consideration was the physical layout," said Jacobs. "The contractor had to store the equipment at either end of the tunnel and had just two lanes to move equipment and bring trucks to deliver asphalt."

The tunnel's road surface was 100 ft. below the water at its deepest point, allowing massive ships to pass overhead. Being that far underwater meant that stormwater drains were critical and could not be damaged.

These challenges were different from a typical interstate paving project.

"The contractor covered the stormwater drains with steel plates during asphalt milling removal and asphalt placement operations," said Lance Eller, VDOT's construction manager of Hampton Roads District. "A vacuum truck was available to clean all storm drains after asphalt placement and to ensure debris removal. During removal operations, the contractor utilized jackhammers, skid steers with milling head attachments and pickaxes to ensure the asphalt was removed as needed. During placement operations, asphalt was feathered down with shovels and rakes to ensure proper drainage in all areas."

Despite the painstaking manual labor, Branscome workers completed paving on the first weekend seven hours early and the second weekend 18 hours early. This enabled VDOT to shut down early the extensive detour some drivers had to take over the James River Bridge or through the Hampton Bridge-Tunnel. 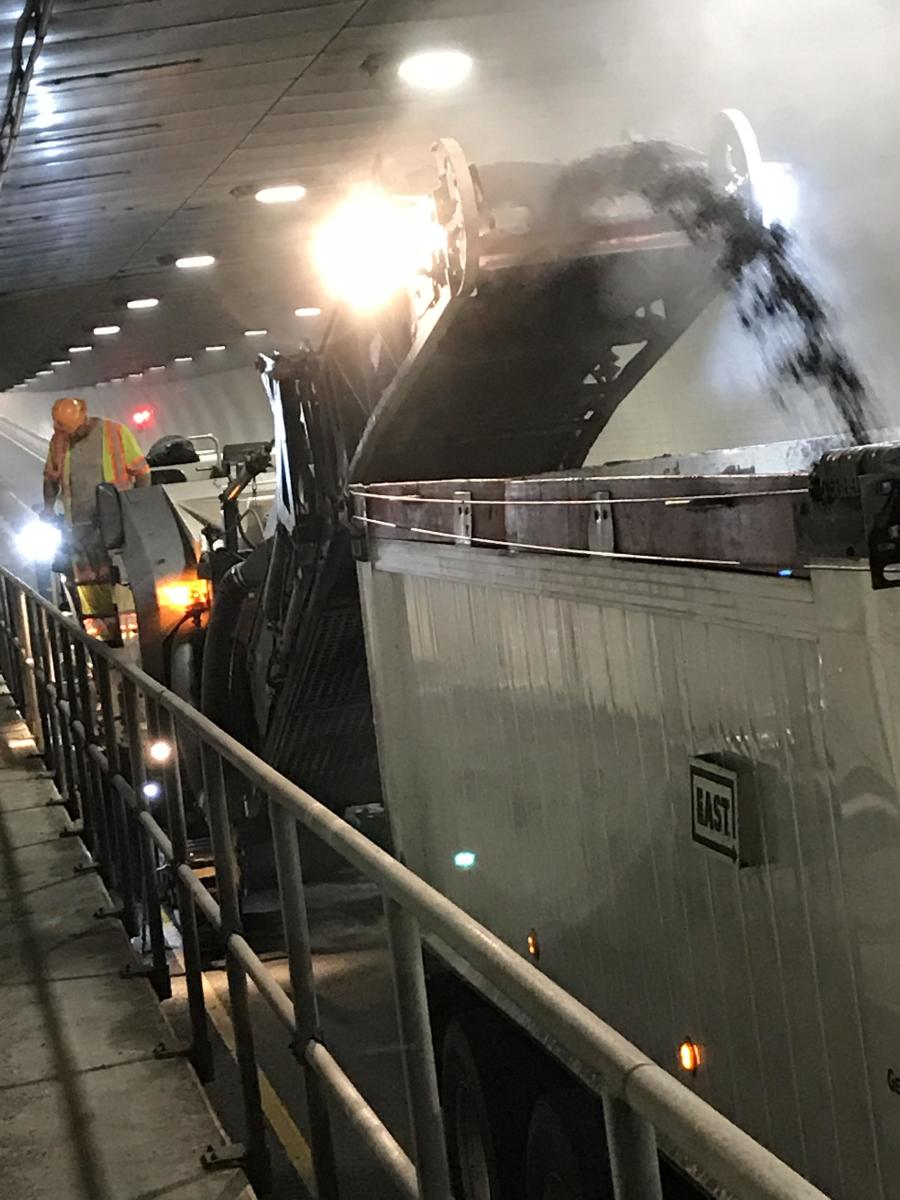 The Branscome team also balanced their work amid COVID restrictions. Workers had little problem maintaining social distancing for much of the work. But crucial meetings usually held onsite transferred to virtual meetings to minimize exposure. This was especially important since an outbreak could have imperiled the team's tight deadlines to finish paving and return the tunnel to normal traffic. Masks, sanitizing stations and wipes were used as needed during the project operations.

"I believe the planning process and teamwork were key reasons the project was so successful," said Sidney Hazelwood, project manager of Branscome. "We had buy-in from all team members and subcontractors. We had a solid plan that everyone understood, and we were able to execute that plan flawlessly both weekends."

With traffic now back to normal in the tunnel, the VDOT and Branscome team saw the teamwork pay off.

"Frankly, I was surprised that the project could be completed in only two weekends," said Eller. "I was also impressed by the quality of the work achieved by Branscome and the great communication between the two teams. It was a once in a career project." CEG