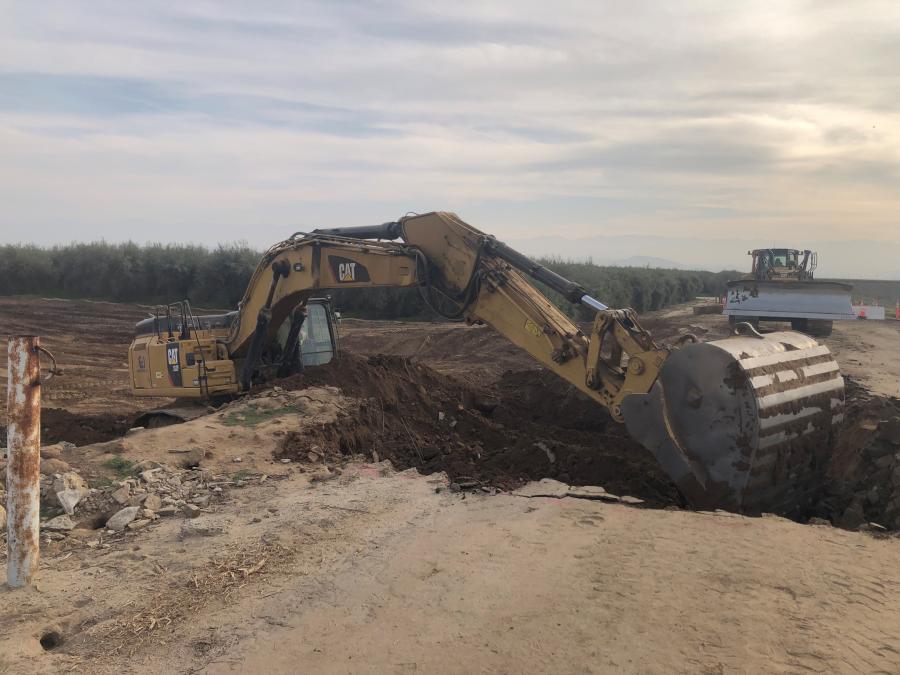 The project is repairing damage caused by subsidence — a sinking of the earth from groundwater removal. Overall, crews will eventually restore capacity in a total of 33 mi. of the canal.

"Achieving schedule milestones are tantamount to our success," said Paul Garcia, the joint venture's construction manager. "The joint venture must meet specific schedule milestones to not impact water deliveries to customers. Canal outages are planned during off-peak delivery season to construct work that interfaces with the existing canal. Our construction partners, including Reclamation, are committed to meeting these milestones and are working diligently to resolve barriers to success." 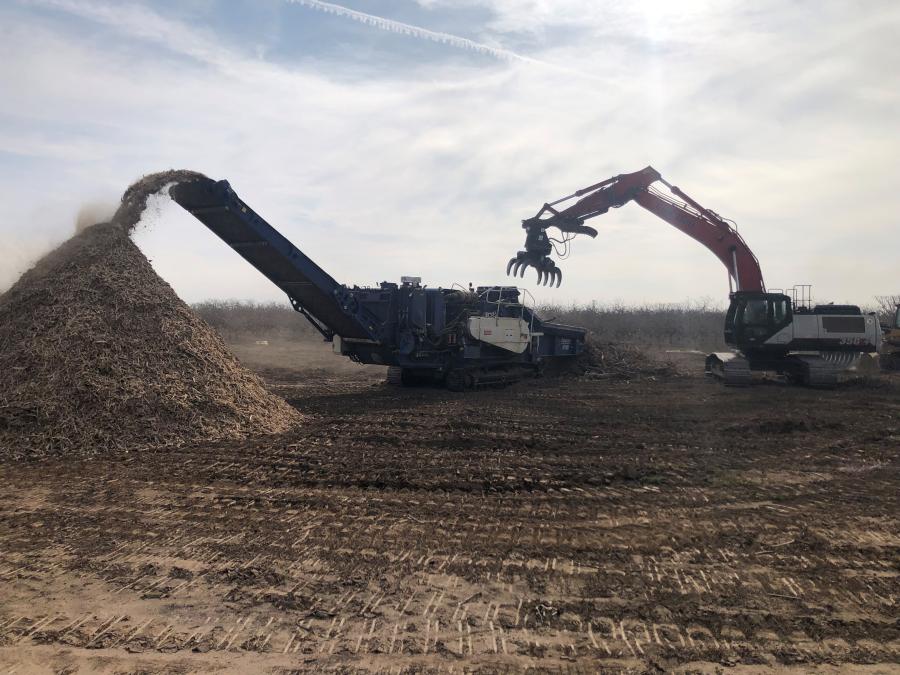 Currently, crews are clearing trees and preparing the site for start of earthwork operations and the construction on various structures such as inverted concrete siphons, concrete turnouts and a concrete check structure at Deer Creek. Structure work is expected to begin in May 2022 and expected to be complete in August 2023.

"Our first goal is to start canal excavation and embankment operations," said Garcia. "Our earthwork subcontractor, G&J Heavy Haul, has mobilized two Cat 390F hydraulic excavators to cut approximately eight feet to the invert of the new canal. The excavated material will be placed directly into the embankment of two new levees that will be constructed on each side of the new canal. The new canal will be 26-feet deep and 24-feet wide at the base of the invert."

Approximately 4 million total cu. yds. are expected to be placed in the embankment. The joint venture will excavate local borrow sources to supply the additional material needed to construct the levees. This material will be loaded at the borrow source into double-semi bottom dump trucks to be transported directly into the embankments.

"New technology plays a major role in our operations," said Garcia. "The joint venture is utilizing GPS-equipped excavators, motor graders and dozers to meet the canal's plan dimensions both accurately and efficiently. In addition, our surveyor, California Construction Surveying, is flying drone photogrammetry to account for quantities on a weekly basis. On an earthwork project of this size, a drone can accurately account for quantities much more efficiently and provide results in less time."

The canal lining operations will see concrete poured-in-place for the floor and walls.

"We will be setting up our concrete batch plant near the project site," said Garcia. "Our Erie Strayer M-5470 is a double-drum plant that will perfectly suit the operation. We are in the process of mobilizing the batch plant from Bakersfield and expect to have the plant in operation by year's end.

"The 3.5-inch canal lining will require approximately 70,000 cubic yards of concrete or 650,000 square yards of liner [roughly the square area of 100 football fields]," said Garcia. "We expect to begin machine paving operations in May 2023."

Reclamation Regional Director Ernest Conant is pleased that the work has begun in the Porterville area.

"[This] symbolizes what can happen when federal, state and local agencies partner together to address water supply challenges," he said. "The groundbreaking marks a critical milestone in one of Reclamation's highest priorities to provide water supply reliability to one of the most productive agriculture regions in the nation."

"Restoring the capacity of our existing infrastructure is an important step toward diversifying water supplies by supporting groundwater replenishment throughout the Central Valley and water recycling projects in Southern California," she said.

Phase 1, said Friant Water Authority Chief Executive Officer Jason Phillips, is "the culmination of five years of dedicated work to design and fund a project to address the most severe subsidence on any major canal in the San Joaquin Valley. While many water projects throughout the West take decades to plan and implement, this project is turning dirt today and will in a few short years restore critical water deliveries that support the San Joaquin Valley's businesses, communities and farms." 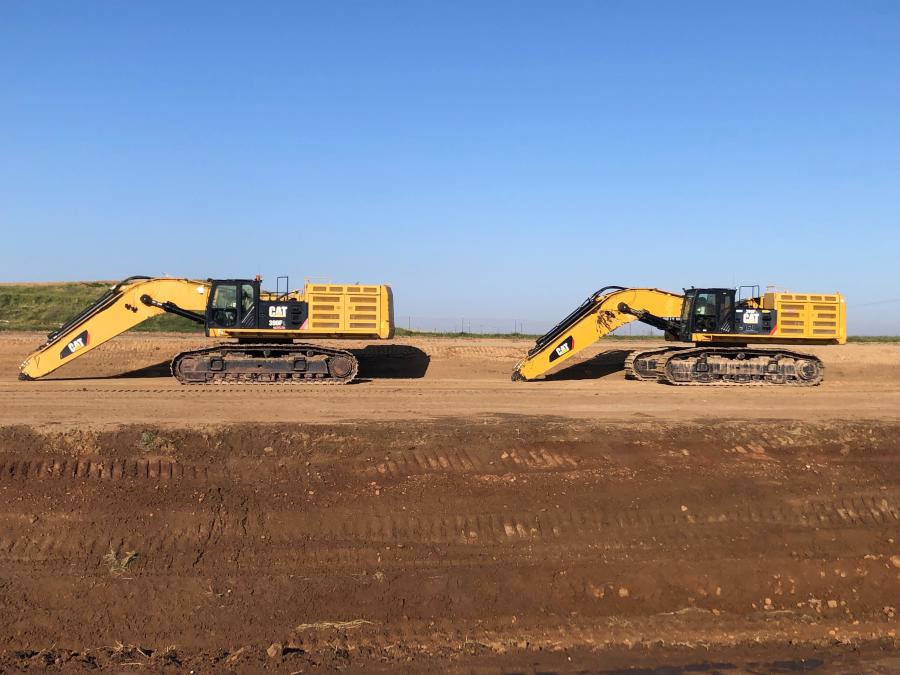 The ongoing work is anticipated to be completed and fully operational by September 2024. Crews are constructing 10 mi. of new concrete-lined canal to replace one of the worst pinch points of the canal's subsiding middle reach, along with eight concrete inverted siphons below various structures and creeks along with various concrete turnout structures, and other miscellaneous elements.

Additional equipment will be brought on-site as the project progresses. The project team will rent equipment from dealerships such as Ecco Equipment, JS Cole Company, United Rentals, Rain for Rent, Herc and Quinn Caterpillar.

"Each partner in our joint venture has maintained great relationships with partner dealerships for years," said Garcia. "Their support on our project is central to our success."

Equipment maintenance is vital on this high-production, linear project. "Concrete and earth is abrasive, tough on our equipment," said Master Mechanic William "Man" George. "It is important we grease, clean pins and bushings regularly, to avoid major repairs. Air filters must be changed regularly and not just blown out. When you blow out the filter, it may cause a larger problem when dirt is blown past the fabric into the engine. It will affect bearings and pistons.

"Our paving equipment requires nightly cleaning after a pave day," continued George. "During the paving shift, concrete builds up on the belts, and may get on hydraulic and electrical lines. We must clean these during and after shift. This is critical to tomorrow's operation."

‘They all play an important role in our success," said Garcia. "But it wouldn't be possible without the expertise of Bob Brosamer. Bob Brosamer, co-owner of Brosamer and Wall Inc., along with Charlie Wall, has been actively constructing large canals since the 1970s. Our team is honored to be a part of this incredible knowledge base."

Why This Project Is Necessary

The Bureau, part of the Department of the Interior, is investing in initiatives to improve water management and drought resilience projects.

"Drought, climate change and less certain precipitation events call for the need to develop innovative and sustainable water management solutions," said Tanya Trujillo, the Department of the Interior's assistant secretary of water and science. "This project will increase water supply reliability in the San Joaquin Valley and symbolizes the benefits of working together with partners to develop ways to utilize the significant investment opportunities to modernize infrastructure that the Bipartisan Infrastructure Law can provide."

The canal project is being funded by Reclamation, the Friant Water Authority, and the California Department of Water Resources (DWR). 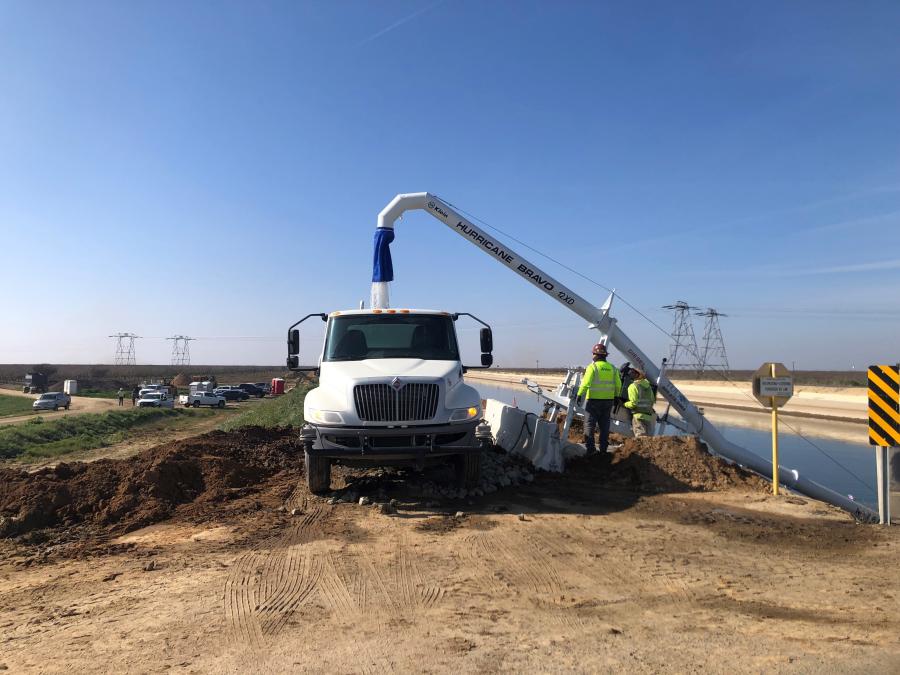 The 152-mi. Friant-Kern Canal "plays a critical role in delivering water to 1 million acres of highly productive farmland and more than 250,000 people from Fresno to Bakersfield in Central California," noted a project press release. "Since the canal's construction in 1951, more than 50 percent of its original conveyance capacity in the middle reach has been lost due to land subsidence."

The canal, completed in 1951, begins at Friant Dam and conveys water from Millerton Lake, a reservoir on the San Joaquin River, south to its terminus at the Kern River in Bakersfield. It was designed as a gravity-fed facility and does not rely on pumps to move water.

"Subsidence in the area, caused by pumping excess groundwater faster than it can be recharged, has caused parts of the canal to subside [or sink]," states the project web page. "This negatively affects the canal's ability to convey water, reducing the canal's capacity. When the land elevation lowers, the canal must be operated at a reduced flow to ensure that water does not overflow banks, thereby restricting the ability to make full water deliveries. The diminished capacity … has resulted in up to 300,000 acre-feet of reduced water deliveries in certain water years with effects most prominent in the middle reach of the canal [milepost 88 to milepost 12]."

The canal, part of the Central Valley Project's Friant Division, is owned by the federal government, with the Friant Water Authority operating and maintaining it via a contract with Reclamation.

"Without the canal," said Former Republican Congressman Devin Nunes, "over one million acres of rich farmland would be put out of production, devastating families and farmers in the Valley's eastside."

Reclamation signed the Record of Decision for the project in November 2020, and Oct. 7, 2021, awarded a contract to the JV through a best-value competitive bid process overseen and managed by Reclamation.

Although the contract will be managed by Reclamation, FWA and Reclamation are working jointly with the JV to implement construction. CEG