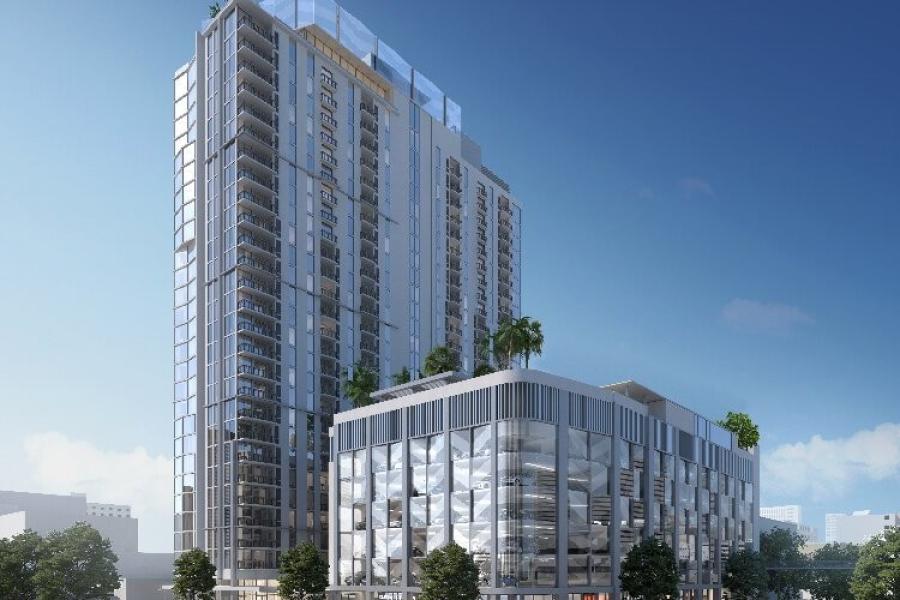 A rendering of the 31-story Arts and Entertainment Residences. (Photo courtesy of Catalyst Communications)

Work has started on a 31-story luxury apartment tower in downtown Tampa, Fla., built to offer residents the experience of living within walking distance of several enjoyable bayside venues in the Gulf Coast city.

Coastal Construction, a Miami-based company, has begun building the Arts and Entertainment Residences (AER), a 334-unit skyscraper going up across from Tampa's Straz Center for the Performing Arts, according to a media release.

The building was developed by Miami's American Land Ventures and Gazit Horizons, a Boston company.

"There is no other location like this in Tampa, where in 60 seconds you're stepping into one of three cultural institutions, taking a stroll on the Riverwalk, or soaking in the view from your own open balcony," Granvil Tracy, president of American Land Ventures, said in the statement.

Officials involved with the AER tower's development expressed their pleasure that the project has finally gotten under way after more than a decade in the making. Leaders in Tampa's arts community, along with local government officials, have been weighing in on the details of the development over the last 10 years.

Besides offering luxurious apartment living, the tower will have shops at the street level sporting 13,688 sq. ft. of retail space and 514 parking spaces in a garage above the storefronts.

The project is situated between many of downtown Tampa's art and tourism destinations, from the Straz Center to the Tampa Museum of Art, Glazer Children's Museum, Tampa Riverwalk and Curtis Hixon Waterfront Park.

"You'll notice the units are larger, and we've placed an emphasis on a healthy lifestyle and wellness, all of which offer a wide appeal from professional millennials to baby boomers," said Sean DeMartino, president of Coastal Construction's Central and North Florida Division, in his company's news release.

Construction is expected to be completed by the spring of 2024.

Since its formation in 1955, Coastal Construction has grown to be one of the largest general contractors in the Southeast with offices in Miami, Tampa, Orlando and West Palm Beach.