Go 10 is an infrastructure reconstruction of Interstate 10 on El Paso's Westside. Its purpose is to improve traffic flow, vehicle capacity and safety along the much-used portion of I-10. 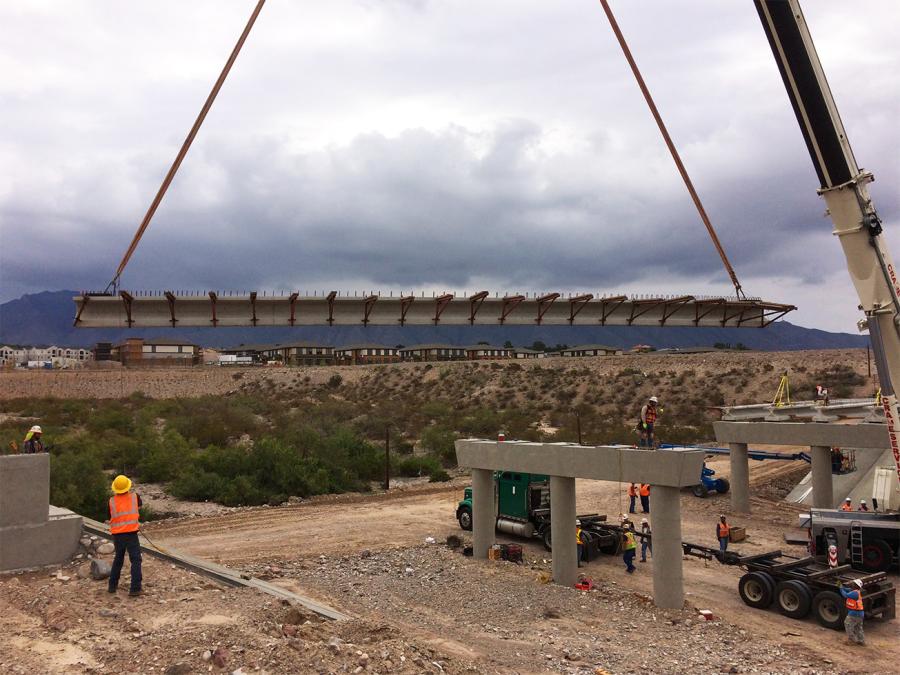 Interstate 10 in El Paso will add 5.75 mi. of collector-distributor lanes from North Mesa Street to Executive Center Boulevard as part of a $158-million project called “Go 10.”

Go 10 is an infrastructure reconstruction of Interstate 10 on El Paso's Westside. Its purpose is to improve traffic flow, vehicle capacity and safety along the much-used portion of I-10.

Go 10 is the largest traditionally-delivered design-bid-build project that the Texas Department of Transportation, El Paso District, has done to date.

Construction of the project started in April 2015 and should be completed by April 2019.

In addition to the new connector-distributor lanes, the project includes improved direct-connector ramps at Paisano Drive; intermittent addition I-10 main lanes in both directions; and reconfiguration of ramps and overpasses at Sunland Park Drive, Resler Drive and North Mesa Street.

Connector-distributor lanes are high-speed roadways that collect and distribute vehicles and in doing so, reduce the need for weaving and merging on the interstate mainlines.

As part of the project, 29 bridges will be built including 14 that extend over drainage ways.

Zone 1 also features reconstruction of the I-10 and U.S. 85 Interchange and addition of new lanes to the eastbound and westbound main lanes.

Zone 2 includes construction of U-turns at North Mesa Street and the building of a direct connector from southbound Sunland Park Drive to the eastbound collector-distributor lanes.

Other Go 10 jobs include upgrades to a portion of North Main Street and portions of north and south Desert Boulevard frontage roads including improved turning movements and better drainage.

Aesthetics are an important part of the project: bridge caps will include a sun design; retaining walls will feature a mountain and sun design in locations where they are visible to motorists; and landscaping includes various xeriscaping with pavers, rock and some native vegetation.

Funding for the project is primarily from state and federal sources. Part of the amount came from El Paso County's 2014 $10 increase on vehicle registration fees.

Go 10 is overseen by the Texas Department of Transportation, Border West Expressway, El Paso Metropolitan Planning Organization and the city and county of El Paso, with TxDOT as the project manager.

Primary contractor for Go 10 is Zurich Insurance of Schaumburg, Ill. Sundt Construction of Tucson, Ariz., is the main subcontractor responsible for performing and managing all construction activities. Subcontractors hired by Sundt are considered second and third tier on the construction ladder.

About 120 workers are currently on the job. Work that doesn't impact motorists is mostly done during daylight hours. Some work is done at night based on crew availability, weather and when traffic lanes need to be closed.

Heavy Use of Concrete, Asphalt

Crews will install 610,000 sq. ft. of bridge deck, while the existing asphalt pavement will be removed and recycled as part of the new pavement. Steel that is removed will be sold to industry for melt down and reuse and concrete will be reused in subgrade layers in various forms.

Recent project work includes construction of an I-10 overpass at North Mesa Street. Crews are building a bridge between the eastbound and westbound I-10 lanes on an existing two-part bridge structure that crosses North Mesa Street.

“The contractor is working the entire length of the project from Mesa to Executive Center,” said Tim Twomey, the project engineer. “Work within the project limits is divided into phases at major interchanges.”

Work at North Mesa Street is currently in Phase 2 of three phases. Phase 3 will feature construction of the westbound main-lane bridge once Phase 2 is complete. Eastbound traffic will then be permanently directed to the newly constructed eastbound bridge.

Work is active at Resler Drive where crews are building the new direct connector and aligning it to the collector-distributor roads. Once traffic is switched to the new structure, the old direct connector will be demolished.

The section between Sunland Park Drive and Executive Center Boulevard involves pavement widening, allowing for the merging of the collector-distributor roadway with I-10 at Executive Center Boulevard. Phase 1 builds the pavement in this section and is nearing completion with Phase 2 involving the center median re-construction including concrete pavement on the shoulder along with a concrete traffic barrier.

Other work involving side road construction is performed along-side I-10 work when dictated by phasing.

Traffic volume and congestion in the project area of I-10 has increased because of population growth and an improved economy in the area. Continued population growth is expected to create even more traffic in the I-10 corridor. I-10 improvements and collector-distributor lanes were planned to help meet the needs of increased traffic.

The improvements are designed to increase capacity while improving traffic flow and reducing accidents. Also, with the collector-distributor lanes in place, weaving movements will be minimized, enhancing safety on I-10 main lanes.

Motorists can expect various lane and ramp closures, speed limit reductions in work zones and designation of temporary on-ramps and off-ramps. Complete closure of I-10 will be necessary at times for major construction events like placing of structural beams, pouring of bridge decks and the demolition of bridges. Major I-10 closures are limited to nights and Sundays.

TxDOT will notify motorists of lane and ramp closures and detours through websites, Twitter and news releases. The project has a public relations component that considers concerns of the local community.

The new direct connection will be located just east of the Sunland Park overpass. Contractors from both projects are coordinating construction schedules and road closures to mitigate traffic conflicts.

When completed, the Border West Expressway will be a toll managed expressway and an alternative roadway for eastbound and westbound commuters.

Grupo Tradeco, a Mexican construction company, voluntarily defaulted on its contract and walked away from the Go 10 project in June 2015. Tradeco's action was prompted by problems related to other projects it had outside of El Paso.

Despite the contract being defaulted, the project is on target to meet or beat its original completion date of April 2019. Potential delays were managed early in the contract to place the project back on schedule.

And Go 10 remains on budget. Planners implemented cost saving measures where possible, while maintaining the original integrity of the project. Partnering and teamwork helped in that effort.