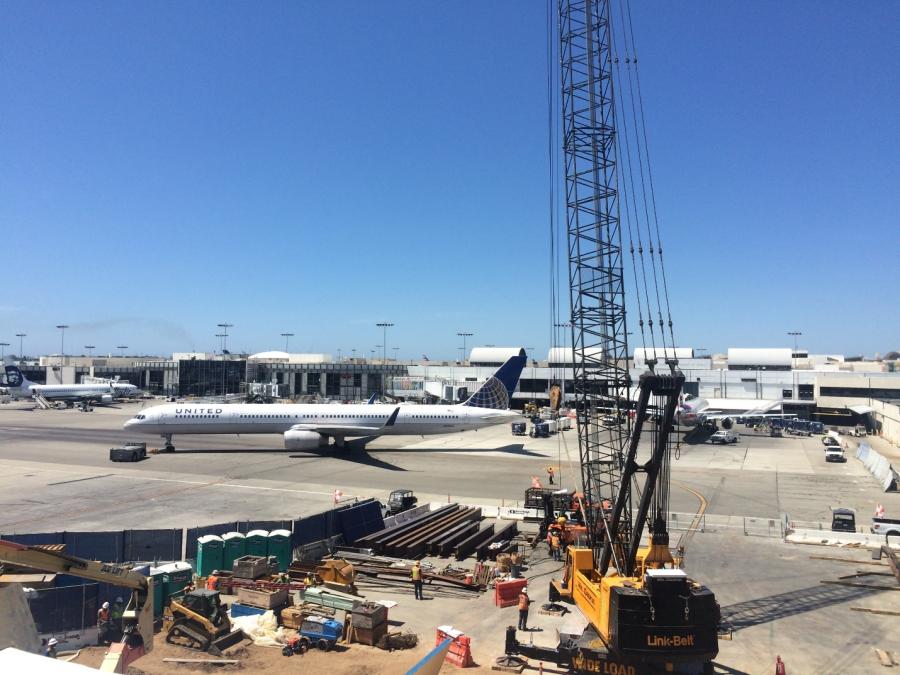 Virtually all of United Airlines’ public space in terminals 7 and 8 at Los Angeles International Airport will be renovated as part of a $573 million construction project. (United Airlines photo)

Virtually all of United Airlines' public space in terminals 7 and 8 at Los Angeles International Airport will be renovated as part of a $573 million construction project designed to speed service and enhance the flying experience for passengers.

United Airlines reported that in 2016, the number of its passengers using the two terminals reached 5.6 million.

Work on the project began in March 2014 and is scheduled for completion in early 2018. Most of the construction is aimed at improving the travel experience inside the terminal.

United Airlines recently opened a new United Club in terminal 7 that features an outdoor terrace. United Club members are provided a comfortable space to enjoy complimentary snacks, beverages and Wi-Fi while waiting for their flight.

In order to expand the United Club, workers built an exterior structure above the existing security checkpoint that supports both the club area and a new customer service center.

The project encompasses 700,000 sq. ft. of existing space as well as the addition of 20,000 sq. ft. for a United Club lounge on a new fourth level of terminal 7. Customers will find an expansive check-in lobby that maximizes use of incoming light and incorporates the latest self-service tools including self-tagging baggage kiosks.

Passenger security screening will be consolidated from the current four locations into a single location with 12 lanes. The remodeled boarding gate areas will feature a modern design including a variety of comfortable seating options and numerous charging stations for customers' electronic devices.

Los Angeles World Airports (LAWA) will acquire as much as $534 million in improvements from United Airlines upon completion.

All LAWA funding for the project comes from LAX's self-generated revenues from aviation- and non-aviation-related activities. No funding comes from the city of Los Angeles general fund.

Hensel Phelps, based in Greeley, Colo., is under a direct contract with United Airlines to construct the project. Hensel Phelps is a design, construction and facility management company.

AvAirPros provides professional consulting and management services to airlines and airports throughout the United States.

Vanderlande is prime subcontractor in charge of the baggage handling system. The company provides logistic process automation at airports and in the parcel market.

Between 300 and 350 workers split between shifts are on the job each day.

The checkpoint at the bridge level is permanently closed.

Two new elevators were constructed near the bridge and gates 72, 75 and 80 are closed for renovations.

“We are on track with our renovations at LAX which will refresh our customer-facing spaces and create a world-class travel experience,” said Jeff Riedel managing director of airport affairs for United at LAX. “Customers will notice a huge change the moment they step into our ticketing lobby and throughout the terminal, especially in our brand new United Club, which features an outdoor terrace with a stunning view.”

Construction crews are updating United's gate areas to create a more modern design with a variety of comfortable seating options and added charging stations for customer devices. The airline recently opened a new economy lobby and is now renovating its premier ticketing lobby, as well as updating jet bridges and the ramp where needed.

In addition, a new women's restroom has opened near gate 71B. A new water bottle filling station has been installed along with the water fountain near this location.

Work continues on a new baggage carousel 1, with temporary walls in place. The United Baggage Service office is in a temporary location near the new restrooms on the west end of the baggage claim area and must be accessed from the street.

The piles support a new structure and all new passenger loading bridges. Torque-down piles are concrete-filled steel pipe piles with a closed-end conical tip welded to the bottom of the pipe.

The torque-down piles were installed using a Soilmec R-930 drilling rig with 200,000 lbs. of maximum torque capacity. After pile installation, Magco assembled and installed a rebar cage composed of #9 bars.

Hensel Phelps then filled the piles with a 4,000 psi concrete to complete the assembly.

Most of the materials removed as part of the project will be recycled.

During construction terminals 7 and 8 can be reached using East Way, a short-cut accessible from the left lane in front of terminal 1.

Airline check-in wait times will be reduced through the use of the latest in airport technology, including self-service check-in kiosks and a designated bag drop zone. Passengers who have already checked in online will be able to exit vehicles at the curb and proceed directly to security via a shorter, more efficient route.

Gate areas are getting a refresh with a new, sleek design, added furniture and more outlets for travelers to charge their electronic devices.

At terminal 7 United Club members will enjoy the airline's new larger terminal 7 lounge where they can work or relax while taking in spectacular views of the airfield, Hollywood, the L.A. metro area and the Pacific Ocean.

The terminal will remain open during the construction, which will be done in phases. With portions of the drop-off area and the check-in lobby closed, passengers should allow additional time for check in, bag drop and security screening.

United Airlines is working with Los Angeles World Airports (LAWA) to ensure that customer impact during construction is as minimal as possible. Any construction project that would interrupt day-to-day operations is being done at night to minimize inconvenience.

Also, all construction work is barricaded off and certain areas of the terminals will be closed as needed.

Using sustainable design for energy efficiency, the renovation project is designed to enhance the passenger experience while minimizing impacts to the environment. The project will comply with current energy-efficiency requirements for mechanical, plumbing and electrical components.