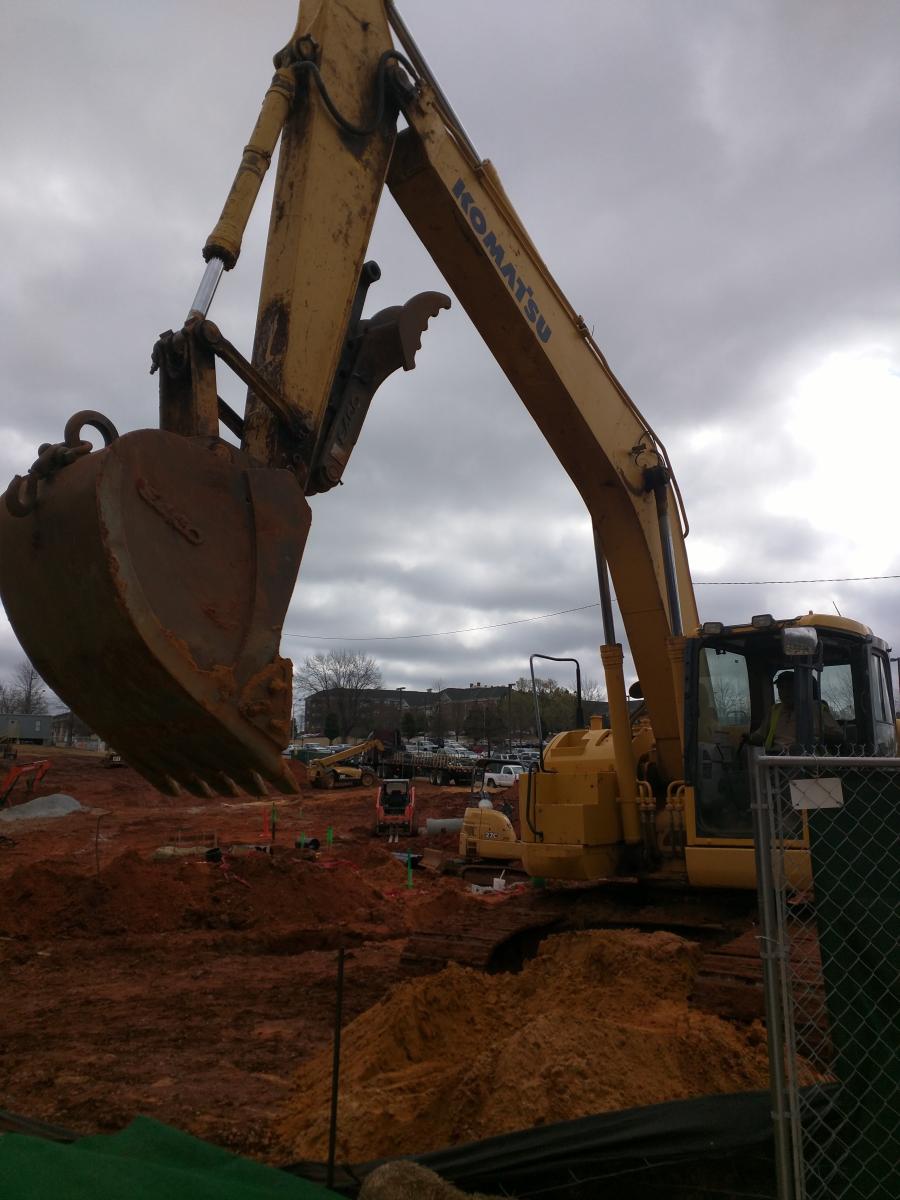 In Tuscaloosa, Ala., a highly anticipated adapted athletics facility is among several multi-million dollar construction projects that will better serve students at the University of Alabama. Work continues on a 500-bed residence hall and new parking deck, while Stran-Hardin Arena nears completion.

“The mission of the adapted athletics program at Alabama is to provide our student athletes with disabilities the same or proportionate experience and resources as other student athletes on campus,” said Dr. Brent Hardin, director of UA Adapted Athletics. “This facility will be a strong step in that direction by giving these deserving students things they needed, like accessible locker rooms, wheelchair storage, specialized adapted workout equipment, accessible meeting spaces and a full-size arena to host competitions.”

In addition to offering a NCAA regulation game venue for wheelchair basketball, the $10 million, two-level structure will feature a workout/training room, strength and conditioning room, team meeting rooms and study halls. Hardin said students with disabilities will have the opportunity to pursue sport and recreation at the school without physical restrictions.

“This is the first facility of its kind for a university in the United States,” said Hardin. “This statement really changes expectations for our athletes, coaches and other universities when they think about what it means to be a college student-athlete with a disability.

“It feels great to be at a university that believes in and supports students with disabilities at the highest level. We have always felt a high level of support from the Alabama administration, student body and our board of trustees from the inception of the adapted athletics program. Our administration sees our adapted athletics program as one of the bright lights of the university, and has backed the program with an unprecedented level of support with this new facility.”

“We have some of the best athletes in the world who choose to attend The University of Alabama, specifically because of our wheelchair basketball and wheelchair tennis high-performance teams,” said Hardin. “Just last year we had athletes from Canada, Germany, Australia and Great Britain. At the 2016 Rio Paralympics, we had more than 20 current and former athletes and coaches from The University of Alabama representing their respective countries.”

According to Bob Pierce, UA vice president for Advancement,“I have been back at the university for two years, and this project was literally the first one I became involved with. It was within my first two days of arriving on campus. The concept and location of the building was already in place, and conversations had begun with Mike and Kathy Mouron about being a major player in the project. President Bell had been here for only about two months, so this must have been one of his first capital projects at UA, as well.

“The lynchpin in making the facility a reality was Mike and Kathy's initial $3 million commitment to the project. Once we had that in place, we knew we could make it happen. President Bell made a firm commitment to those of us in Development, Brent and Margaret on behalf of Adapted Athletics, and Mike and Kathy as lead visionaries for Stran-Hardin Arena that, if we could raise $5 million in charitable contributions, the University would provide the other half from internal sources.”

The project is being funded with 50 percent coming from charitable gift commitments and the other half from university funds. Pierce said the completed facility will be a great source of pride.

]“How do you put into words what it's like to be the very first to accomplish something this significant? We are not aware of another university in the country with a facility specifically dedicated to adapted athletics. Not only that, but when President Bell committed the University funds setting the project in motion, he was very clear that it wasn't enough simply to have the facility – it had to set a standard that was on par with other athletic facilities at The University of Alabama.

Tom Love, UA's assistant vice president of construction administration, said work on the arena is scheduled to be completed in late November. The team will begin the process of moving in equipment and furnishings during the month of December, with a dedication ceremony being planned.

As for other projects under way or in the works, “The campus is growing, and existing buildings are being renewed to appropriately support the teaching and learning mission and the student experience,” said Love. “Construction Administration typically completes approximately 200 projects per year, and works to support the overall goals. These projects range in size from $5,000 to $60 million. 2017 saw several major projects finish for the start of the fall semester, but the current workload has been relatively consistent over the past five years.”

“It's challenging to have projects in different sections of campus, with each project having a different scope. Our teams of designers, project managers and field coordinators work constantly to minimize the impact to the academic operations of campus. Major projects in the academic core area of campus receive special attention in such areas as logistics, site limits, security and noise control. UA is fortunate to have a great community of contractors to execute the work, which is essential to the success of our projects.”

While students may be a bit inconvenienced for now , Love said it's important to focus on the big picture.

“Our teams work extremely hard to notify the campus of upcoming work and to minimize the impact, which, hopefully, allows construction to proceed in a minimally disruptive manner. Projects similar to North Lawn Hall or H.M Comer Renovations require some inconvenience, but, once the facility is operational, it's worth it.”

The school's Greek population also is preparing for changes. The University adopted a new sorority master plan in 2012, which provided the chapters the opportunity to enlarge their houses, provided space for new chapters to come to campus and make better use of the land.

“Many things impact the decision to renovate or demolish a building. Most chapters chose to build new houses due to the need to accommodate growth, provide amenities to meet the expectations of current students and to address code issues.”

The new houses are approximately 40,000-sq. ft., and include a basement level. They will provide sleeping quarters for approximately 60-plus students/chapter members, which is a 50 percent increase that will help to support the chapter's continuing growth.

The new residence hall is located on the site where Somerville and Palmer Hall stood, north of Paty Hall. The project has a lower level that will serve as a rated storm shelter.

“This area is protected by a podium slab that supports the four floors of residential rooms. The new residence hall is planned to serve freshmen, and will open in fall of 2018. In addition, the parking deck is proceeding on schedule, with the first elevated concrete placement occurring in August.”

Current data shows that for the 2016 to 2017 fiscal year, construction administration closed out 191 projects for a total of $153 million. Major projects that are in process have a cost of $67 million, which will generate a cost of projects to approximately $220 million.

“It's very rewarding to see students, faculty, and staff interacting in a space that Construction Administration and our partners have spent so much time and effort planning, designing and constructing,” said Love. “The administration of UA has done an excellent job of planning for and accommodating the past and future enrollment growth on campus.”

Love said the elements have not hindered the work, but crews are prepared if conditions change.

“Fortunately, we've had no major events that have affected current construction projects. There are always precautions to be taken for normal events, but, generally speaking, weather has not been a factor, so far. However, we do take precautions if the potential for severe weather is identified. Job sites will be inspected for loose materials, storm water controls, building protections, equipment concerns and minimal debris on-site.”

The adapted athletics facility is less than three months from completion. The construction phase is roughly 85 percent finished As of mid-September, the curtain wall was 90 percent installed, and duct work and brick work were well underway.

“Grading required the removal of 700 cubic yards of material. The site sloped, and an existing retaining wall was removed to extend the first floor of the new building. This material was moved to another site on campus that needed fill material,” said Love.

“It contained several utility relocations that had to be performed prior to construction,” said Love. “As always, once construction began, the entire team worked together to make adjustments. The difference between the studies of the underground utilities and what was being uncovered generated several coordination meetings. The demolition required detailed removal of the existing building façade where the addition connected. This work proceeded smoothly, temporary walls were erected, as needed, and the temporary protection was installed.”

The current value of projects that have been presented to and have at least an approved Stage 1 by the board of trustees is approximately $400 million. These projects will be executed over the next three to four years, depending on final approvals, design completion and bid results.