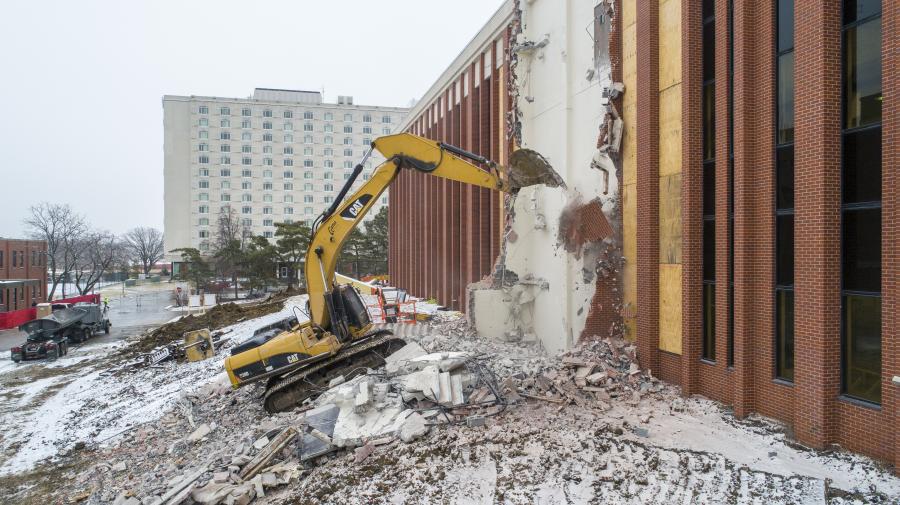 At the University of Nebraska-Lincoln, construction crews have successfully completed demolition of the Link between Scott Engineering Center and Nebraska Hall. Foundation work is now under way on the first of two school projects totaling $160 million.

"The College of Engineering at the University of Nebraska-Lincoln is undergoing a major multi-phase facilities initiative to transform our teaching and research enterprises," said Lance C. Pérez, dean of the College of Engineering. "The initiative includes three distinct phases. Demolition of the 34-year-old building called 'the Link' is part of the $75 million Phase I project.

"We are replacing this structure with a new building that will reconnect Scott Engineering Center and Nebraska Hall within the engineering complex on the university's City Campus, and also provide approximately 87,000 square feet of state-of-the-art research facilities. Scott Engineering Center also will be renovated to house two academic departments, undergraduate teaching laboratories, research laboratories and some additional space for the college's planned expansion." 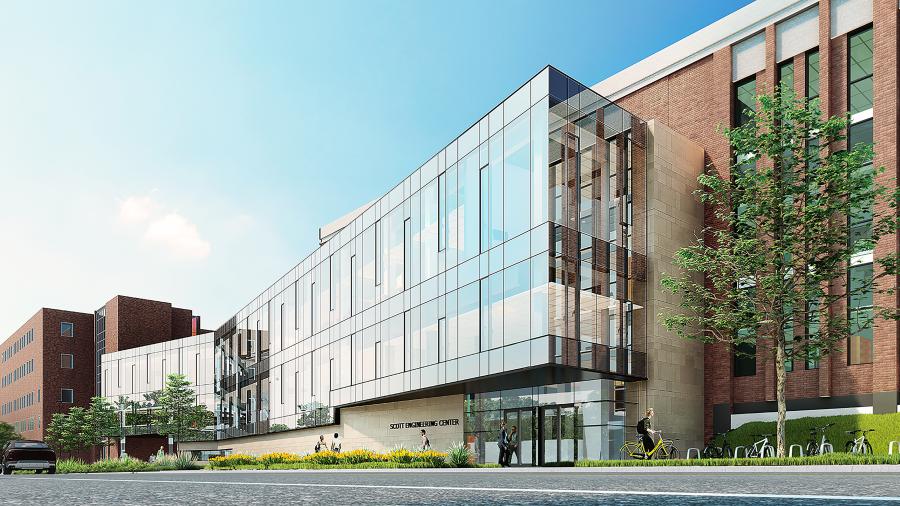 The Phase II project consists of construction of Kiewit Hall, a $85 million building adjacent to the engineering complex.

"It will be dedicated to transforming our students' educational experience," said Pérez. "Peter Kiewit Sons' Inc., has committed $20 million for this new facility, which will provide state-of-the-art active learning classrooms and informal learning spaces designed to support student design teams and facilitate partnerships with industry and communities.

Pérez noted that the College of Engineering's current facilities on City Campus had reached end of life, and had several costly deferred maintenance issues.

"The poor state of these facilities was negatively impacting the recruitment and retention of student, staff and faculty talent. Nebraska legislative bill 957 created a partnership between the state of Nebraska and the University of Nebraska that resulted in $75 million to fund the Phase I project.

"Private donors are funding the Phase II and Phase III projects. These facilities are essential components of the college's plans to grow, so we can better meet the workface needs of the state of Nebraska, while becoming a larger driver of economic development in the region." 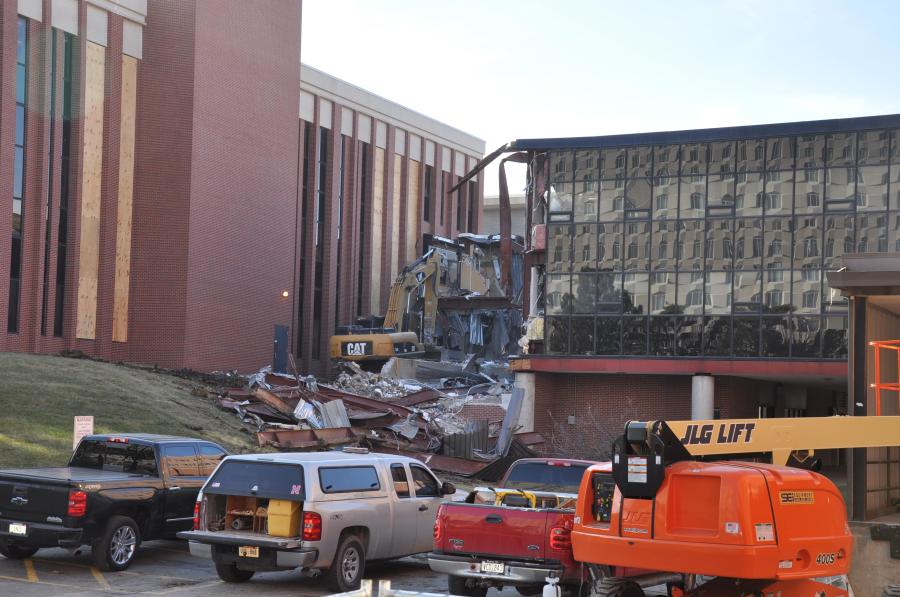 Regarding Phase I demolition, Devin Morris, superintendent of Hausmann Construction, said the work was necessary to facilitate the installation of the new connector and addition to the Scott Engineering Center.

"It's crucial that in order for the new building to start in the right direction, the success of the demolition had to be well coordinated and executed. We have accomplished this goal, and are starting new foundations."

Phase I work began in October 2019, with estimated completion by fall 2022. Early on, saws were used to separate the buildings to make for safer razing. Morris said the tear down took place at an ideal time.

"Students and staff were off site for the holiday break. Noise did not disrupt learning and research activities."

Typical work hours for crews on site are Monday through Friday, 7 a.m. to 5:30 p.m., and Saturdays and Sundays as necessary. When construction activities are at peak, there will be close to 200 workers on the job. With the exception of the Scott Engineering Center building, work on the project should be contained to the site. Morris said steps have been taken so that no one is exposed to dangerous conditions.

"A multitude of measures are in place to ensure that everyone remains safe while working on the project, beginning with our site logistics. Our entire site is enclosed with a temporary fence and also has a worker that ensures that the entry gate to the site remains closed unless deliveries/personnel need access. We also have installed numerous signs around the site displaying proper work attire, personal protective equipment requirements, etc.

"Before each contractor begins work on site, they attend a thorough safety training meeting conducted by a Hausmann employee. Topics covered in the meeting include specific hazards that could be encountered on site. We also make sure that prior to beginning work on site, all contractors submit a site-specific safety plan, as well as a list of job-hazard-analysis sheets that identify potential hazards specific to each contractor's scope of work and how to mitigate the risk. Lastly, we hold monthly job-wide safety meetings to discuss current work on site, changes to the site, as well as any new hazards that could occur." 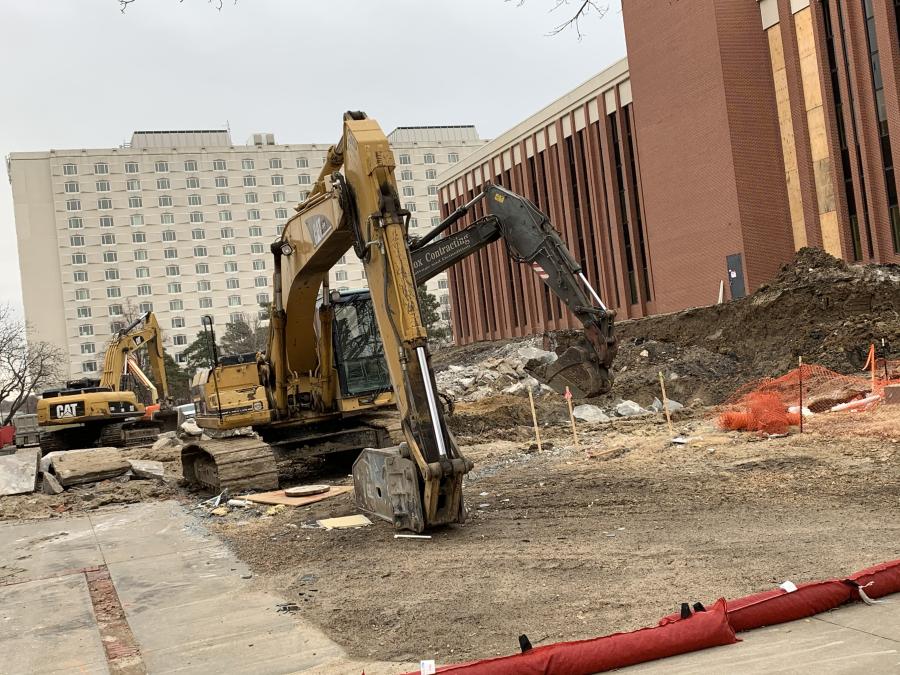 According to Morris, the isolation of the existing Link building from Nebraska Hall and Scott Engineering Center posed many challenges, including the separation of MEP systems.

"There were many electrical, data/communication, plumbing and sprinkler piping lines that needed to be traced out and isolated before the separation could take place. This took place over the course of several weeks before demolition was scheduled to occur, with the help of various university personnel and contractors. We were successful in our planning and separation activities, and no unexpected outages occurred.

"Another challenge pertained to the removal of the existing Link building foundations. Under each concrete structural column, a large concrete pile cap and associated auger cast piles were in place, with some dangerously close to existing utilities. Some of these utilities included a 12-inch main high-pressure gas line that served virtually every building within a one-mile radius, as well as steam lines that fed several buildings.

Morris said through careful demolition tactics and equipment, the foundations were successfully removed.

"There also was a large stairwell that was scheduled to be demolished on the north side of the Scott Engineering Center building. This work facilitated the use of a remote-controlled robot to perform this precise work. The robot sat within an engineered metal cradle, affixed to a forklift. An operator moved the robot into position, while another worker in an aerial lift operated the robot. Due to the very high elevation in which the demolition had to occur, the robot was the safest solution to prevent workers from being exposed to falling debris.

"The last big challenges we faced were noise and dust control. We coordinated with the university to perform the very loud activities over the winter break, and even shut down activities the week of finals for the students to allow everyone to be as focused as possible during a stressful week. For dust control, a worker was hired with a fire hose to spray down areas of demolition, specifically related to concrete, while the structure was being demolished." 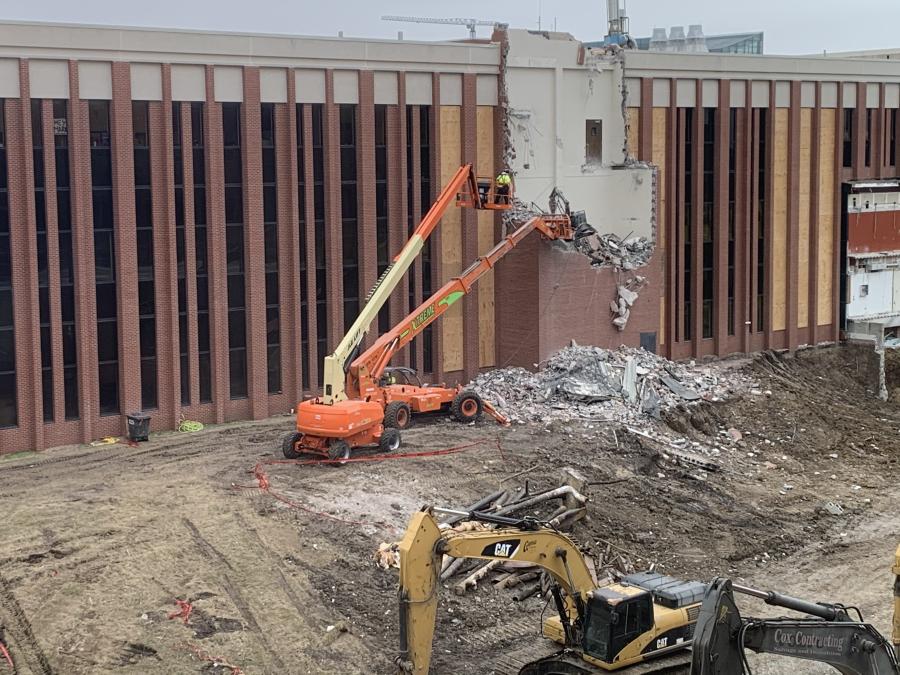 Demolition activities were completed in mid-January.

As for the technique used, "The connector was demolished with a combination of large pieces of equipment," said Morris. "The first piece of equipment was a large excavator that first broke the glass and façade to allow access to the structural steel. The second piece of equipment used an implement that sheared the structural steel and concrete columns from the pile caps below, which were separated on site, then loaded out on trucks. The final demolition occurred to the below-grade walls, columns, beams, pile caps and auger cast piles by way of a large pneumatic breaking hammer."

Morris added, "This is the best approach, because it is methodical, planned, time-efficient and, most of all, safe. You basically take down the building in the opposite way it was constructed."

Per the LEED initiative for this project, the material demolished was separated and recycled.

Peterbilt semi-trucks were used to haul away materials. Between 150 to 200 loads were required, as part of the cleanup.

Morris said winter played a role during the foundation activities. 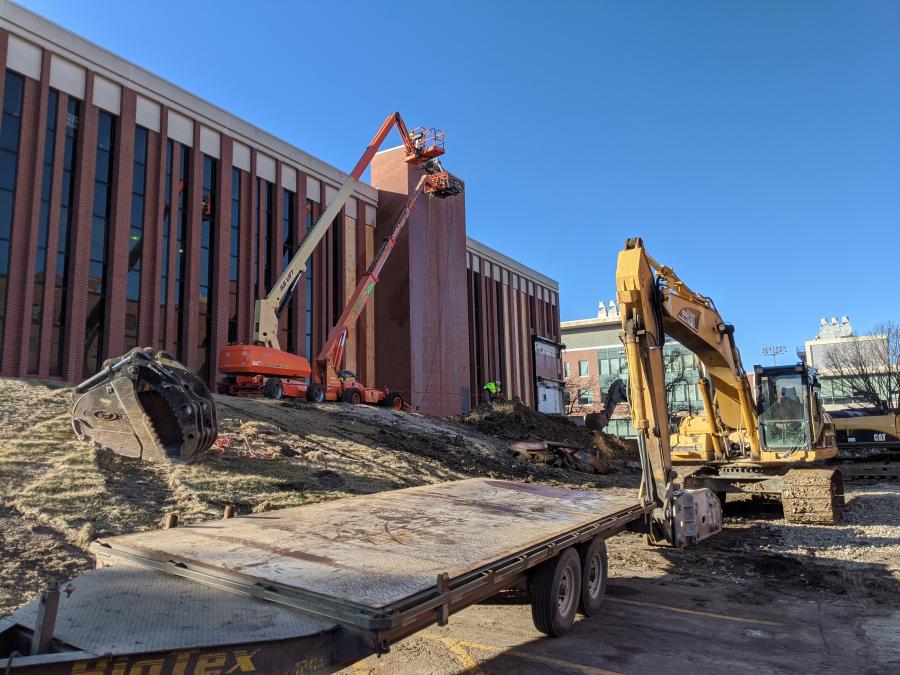 "We had provisions on stand-by for normal cold weather conditions, such as thermal blankets, ground thaw machines and various gas heaters. If prior proper planning occurs, colder temperatures only slightly affect work due to loss of productivity with construction workers and sometimes equipment failures."

Despite all the typical concerns on a construction project of this nature, Morris said helping the university realize its vision is an honor.

"It is extremely rewarding, exciting and special to be part of such a great project for the University of Nebraska."

While construction is still in the early stages, Pérez is pleased with the work accomplished so far.

"Watching the Link come down not only signified the beginning of this exciting facilities initiative, but it has re-energized our students, staff and faculty. It's also already helping our recruiting and retention efforts and is very tangible sign of the deep commitment of the university, the state and the Nebraska business and philanthropic communities to the long-term vision of the College of Engineering." CEG