U.S. 169 Project Opens Ahead of Schedule

To bring this highway for a quick turn back to motorists, Ames Construction relied on innovative construction techniques and 185 tradesmen working two shifts and extended hours on the weekends. 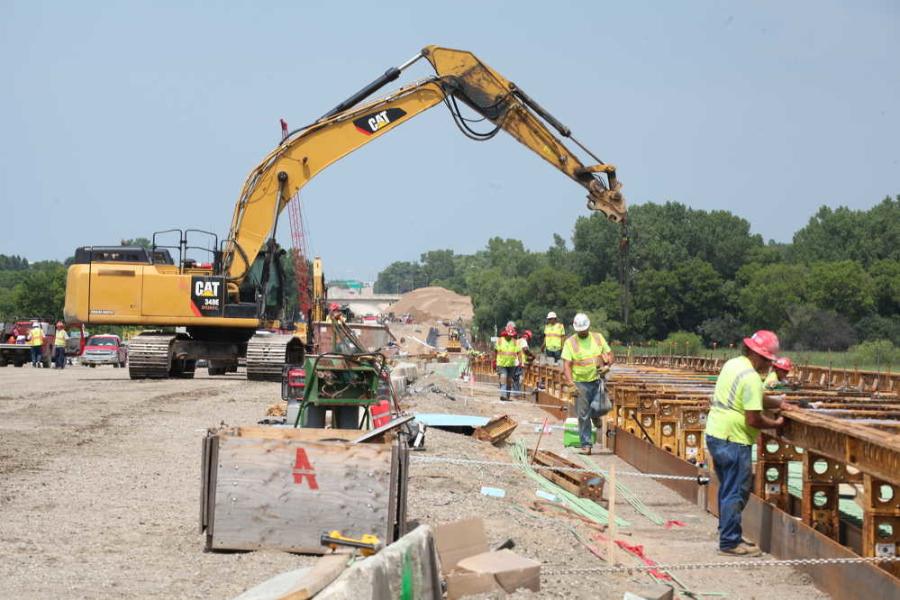 The causeway begins to take shape.

In the early morning darkness and damp cold of a Minnesota winter, crews closed off a 3,000 ft. long bridge deck of U.S. 169 carrying 90,000 daily motorists over an expansive wetland and small creek in the city of Edina.

With this closure, the four-lane highway was reduced to two lanes along another 6 mi. stretch of aging pavement to reconstruct the highway and extend the acceleration and deceleration lanes at a busy interchange connection with a city arterial.

Light, falling snow flakes sparkled from the brightness of klieg lights as Cat excavators equipped with hydraulic hammers and ripper shanks began tearing into the steel and concrete that held the bridge and road together.

Starting at 6 a.m. on Jan. 23rd, crews with Ames Construction and its sub-contractors had 272 days to replace the bridge with a more cost-effective causeway, built to last 100 years, and complete the road work at the same time.

Ames Construction crews and its sub-contractors beat this deadline by a month when it brought the road and causeway back to the public in late September; however, crews are still working to complete some minor tasks.

Failing concrete pilings supporting the bridge structure, built in 1974, mandated its replacement by 2020 to spark the entire project, according to the Minnesota Department of Transportation (MnDOT) web site.

To bring this highway for a quick turn back to motorists, Ames Construction relied on innovative construction techniques and 185 tradesmen working two shifts and extended hours on the weekends.

They were supported by upwards of 100 pieces of mostly Cat heavy equipment.

To stabilize the poor soils below the causeway, Ames brought in The Menard Group to drill its proprietary “controlled modulus columns” for foundation support and combined them with Mechanically Stabilization Embankment (MSE) panels to support the road embankment for the causeway.

Both are rarely used construction techniques by MnDOT and the first time that MSE walls were installed in a Minnesota flood plain, said Curt Kallio, MnDOT deputy project manager.

The Menard Group is a Pittsburgh based design-build specialty geotechnical contractor with a focus and expertise in ground improvement and alternatives for deep foundations on sites with poor soil conditions, according to the company web site.

Ames Construction based out of Burnsville, Minn., took on the $64 million project under the design-build process. Starting out as a family run, local earthwork contractor, the company has grown over the last fifty years to a full service heavy industrial and civil contractor working throughout North America.

MnDOT chose a get in and get out quick approach to complete the work to make the construction less disruptive and safer for the motorists and construction crews.

For the motorists, the accelerated time schedule and bridge closing reduced construction impacts from three years to one, allowed construction to move forward at a time when less construction occurred on alternate routes and reduced the risk to motorists.

Working to the advantage of bridge crews, the bridge closure gave construction crews and equipment free reign in the work zone without competing for space and guarding their flanks against high speed traffic running within feet of the work zone.

In the end, motorists have a smoother road surface, drivers have more merging space at Cedar Lake Road and pedestrians have improved access.

The construction took place between the busy, suburban freeway interchanges of I 394 at the north end and TH 62 on the south side.

A bit of interesting trivia entered into this project as well.

Under the bridge and most likely not known to the daily commuters driving it for years, the original road bed built on fill was still intact.

“You could drive a car down there, you could walk on it and there was even some pavement left in places,” said Kallio.

U.S. 169 is a four lane highway cutting north and south through several Minneapolis suburbs and crossed by three busy highways including I 394 which is a key link to I 94 and I 35W, which skirt downtown Minneapolis.

Since construction began, workers faced a very short time frame, worked around a wet summer and an environmentally sensitive area while losing three weeks to the schedule just out of the gate as bridge demolition began.

Despite the weather and delay, MnDOT is pleased with the work and early opening of the highway.

“The project went really well. It was a well oiled machine with the day and night shifts working,” Kallio said of the Ames construction team and added “the Menard crews did an outstanding” job installing their proprietary support columns.

When demolition began on that early morning in January, an existing utility still hung from the southbound lanes of the bridge to force the early change in the construction schedule.

Originally, Ames Construction phased the project to demolish both northbound and southbound sections of the bridge simultaneously. However, demolition crews were stuck on the northbound lanes while utility crews removed and relocated their line hanging below the southbound lanes.

To begin the causeway construction, sheet piling surrounding the work zone was driven up to 45 ft. into the ground to keep the work area dry and protect the wetland from contaminates.

Cat excavators ran two shifts through the late winter to dig out 150,000 cu. yd. of muck to make room for the causeway.

To stabilize the soft, organic material below the base of the causeway, Menard drilling rigs drilled 6,000 controlled modulus columns 30 to 35 ft. deep and about 15 to 18 in. in diameter into the soil.

“We drilled down through all the organic and swamp layers and socked the columns into competent earth material and filled them with grout and in some cases rebar. On top of the columns, we installed transfer platforms combined of gravel and geogrids.

“Basically, that's the foundation for the causeway,” Carlin said.

To build the causeway from that point, Cat 330 excavators set 2,400 MSE panels to support the fill dumped into the core of the causeway.

“The panels are about 5 by 10 feet stacked together and attached with metallic galvanized strips that lie back anywhere from 10 to 20 feet into the core of the causeway,” Carlin said.

Filled with gravel and select granular and compacted in lifts, Carlin estimated 250,000 cu. yds.of material was dumped into the core creating a constant stream of trucking activities over a period of eight weeks.

Because of the wetland area surrounding the highway on both sides, design called for several large box culverts to be installed through the causeway for flood mitigation measures and bring the creek under the road surface.

This work required the placement of 485 precast concrete box culvert sections picked and lowered into place by a Manitowac 11000 crane.

Along with the additional hazard of working under live traffic, “there's just a lot of coordination, a lot of traffic staging, keeping ramps open, just a lot of staging challenges,” Carlin said.

Because the closures at each end of the construction zone were busy access points for the local neighborhoods and business centers directly adjacent to the highway, traffic control for these areas took on a life of its own.

“We added detours, we added signage, we added local police assistance from three different cities for extra enforcement to help deal with traffic.

“Noise was an issue because of the extended hours. We had to be really cognizant of what activities we planned for the night shift. We had to coordinate and plan to make sure our night shift remained compliant with the local noise ordinances,” Carlin said.

Environmental compliance ranked high on the list of priorities for this project. Among the basic efforts to protect the wetland, the surface and groundwater was pumped through a filter system to clean it before it was released back into the Nine Mile Creek.

Carlin summed up the challenges to this project by saying “it was very fast paced due to shutting the freeway down, very wet conditions from working in the swamp. It's been an above average rainfall year and there was a lot of effort put forth by field crews to stay compliant with all of our environmental permits and requirements.”

“Every time it rained, we had to deal with the water. Crews were always checking the de-watering operations. Just this whole process was one of the bigger challenges,” Kallio said.

MnDOT's public information staff kept the public up to date on closures and communications with the adjacent neighborhoods.

“We worked very hard to make sure the affected communities knew about the project's impact well before it started. This project had a lot of ramp and lane closures and we did our best to make sure motorists knew what was open,” said David Aeikens, MnDOT communications officer.

He added that “people are excited to get the road back open and have been very patient and have done well dealing with detours and additional traffic.”

As work winds down, a small crew will remain on site going into November to work on punch list and miscellaneous work items.