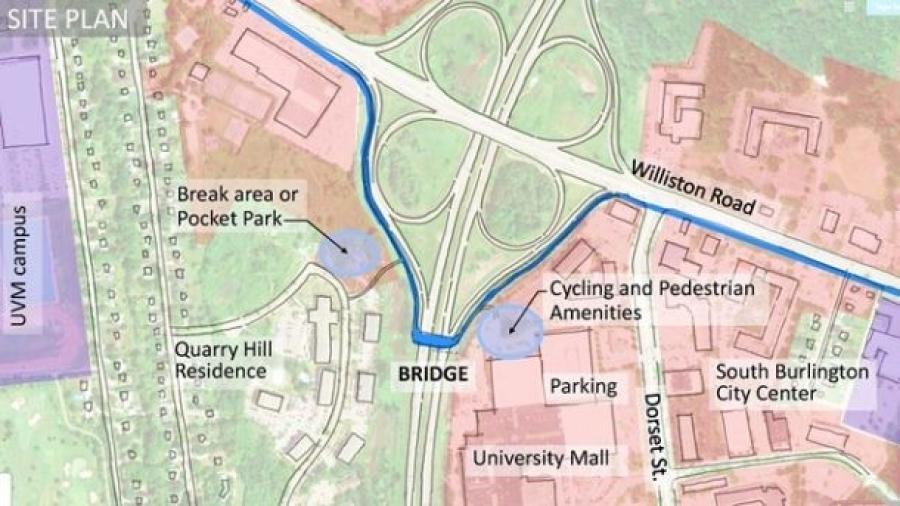 The city of South Burlington expects to receive almost $9.8 million in federal money to design and build a foot and bike path over the I-89 intersection, officials announced. (Freeman French Freeman architecture interior design and planning image)

Federal money has been awarded to South Burlington, Vt., for the construction of a pedestrian bridge near a busy intersection of Interstate 89 in the city.

The state's two United States' senators, Patrick Leahy and Bernie Sanders, along with Congressman Peter Welch and South Burlington officials, announced Nov. 19 that more $9.7 million had been secured through a federal grant for the project, which will create an elevated ramp next to the Williston Road overpass that acts as the main artery into downtown Burlington.

Pedestrians and cyclists currently are forced to cross multiple on- and off-ramps alongside traffic on the bridge, reported WPTV-TV in nearby Plattsburgh, N.Y.

The RAISE, or Rebuilding American Infrastructure with Sustainability and Equity, grant program is a discretionary funding initiative administered by the U.S. Department of Transportation (USDOT). The South Burlington project is one of 90 across the country that received the awards. In 2021, USDOT received 765 eligible RAISE applications requesting more than $10.3 billion in funding.

The Vermont congressional delegation submitted a letter of support for the city of South Burlington's RAISE grant project last July.

In a news release, city officials said they remain hopeful the project will discourage urban sprawl and allow more residents to choose fuel-free methods of transportation that can lessen the area's carbon footprint.

"Modern infrastructure is critical to address the impacts of climate change," South Burlington City Manager Jessie Baker noted in the statement. "We are thankful for the financial support to do this while also building community vibrancy."

Efforts to secure funding received backing from all three members of Vermont's congressional delegation and follow years of public input. It follows a recommended plan released last year, which axed a proposed gondola crossing above the roadway, according to the TV station.

"This project in the heart of Chittenden County will make it safer and easier for Vermonters to travel home and to work by bike or on foot," commented Leahy in the Nov. 19 press release. "Part of the federal strategy to limit the worst impacts of climate change must be to invest in non-vehicular transportation [and environmentally sustainable projects for Vermont's downtowns]."

In his role as chairman of the Senate Appropriations Committee, Leahy included language in the Fiscal Year 2020 Omnibus Appropriations Bill to ensure that rural states like Vermont would receive a portion of these competitive grants.

"If we are going to combat the existential threat of climate change, strengthen our economy and improve the lives of Vermonters across the state, we can and must transform our transportation systems away from fossil fuels and toward sustainable alternatives," noted Sanders, Leahy's Senate colleague.

Sanders added that the pedestrian bridge project "is an important step in the right direction" to give Vermonters "a safe, affordable and sustainable way...to travel between Burlington and South Burlington."

According to South Burlington's Baker, the bridge structure is "envisioned to be a destination, not just a pathway," in that it will "connect our burgeoning City Center with our neighboring community and key destinations such as the [University of Vermont and the UV Medical Center]."