Progress and timelines show the project on schedule, with the actual cost for the concrete placement driving the largest percentage of completion for the project. 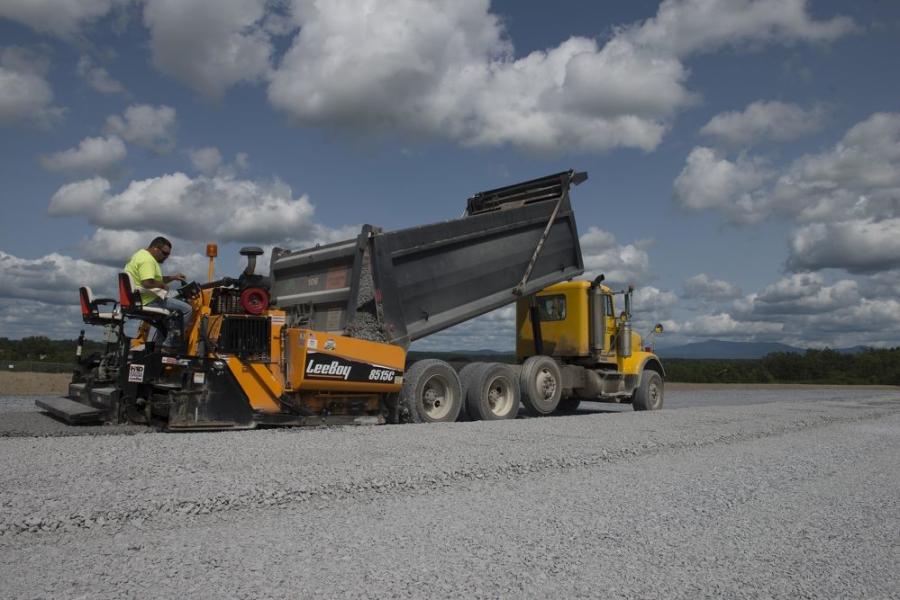 As part of the largest construction project ever awarded in Vermont National Guard history, crews are making improvements to the taxiway that military jets use at Burlington International Airport. The roughly $40 million project also replaces the apron where Vermont Air National Guard planes park and refuel.

“It's extremely rewarding to witness the airfield project happening after decades of planning, programming, budgeting and design,” said Colonel Adam Rice, mission support group commander. “The taxiways had been identified as too narrow for fighters and deficient in many Air Force standards since the early 1990s. The parking apron's maintenance and repair cycle has been increasing year to year since the arrival of F16s in the mid-1980s.

Colonel Rice said the programs and budget estimates had been prepared since 2001; however, there was not enough support from the National Guard Bureau to fund the full replacement until it was announced that Burlington would bed down the F-35 Joint Strike Fighter.

“The thought of placing $2.2 billion worth of Air Force assets on a crumbling ramp soon got the attention of Air Combat Command and National Guard Bureau leaders, and the program was accelerated in 2014. The design was completed in 2015, and construction began in the fall of 2016. When complete, this project will secure a new, fully-compliant military airfield for the next 50 years, and will have strategic impacts to our nation's defense.”

As for how construction affects day-to-day operations, “The project was phased so that in the first six months, the contractor was limited to work on taxiway Foxtrot, which allowed the F16 mission to operate off the apron and taxiway Delta and Echo. By April 2016, the base had to give up the large parking apron and access to Echo, access to covered 15 hangar parking spots, and operate out of a smaller parking apron and fewer hangar spots on the south end of the base to facilitate ramp construction.

“The wing leased an aircraft parking apron from the airport and began to reduce the number of aircraft on the base, due to space limitations, and continued to tow aircraft to taxiway Delta to conduct reduced flying operations off the main runway. Before Delta taxiway is finally given up to the contractor for reconstruction, they must make new pavement on the apron available as a tow lane to taxiway Echo to continue reduced flying operations. This has created additional work for the crews maintaining the aircraft and protecting them from potential foreign object debris (FOD) damage.”

Rice noted that renovations of existing aircraft maintenance facilities for F35 conversion also are taking place in the next two years, which will continue to impact current flying operations. In the spring of 2019, the F-16 mission will cease, the unit will go into conversion and the first F-35 aircraft arrival will occur in the fall of 2019 to fully upgraded facilities.

The city of Burlington owns the airport, which is located in south Burlington. The job site was considered a functioning airfield that required significant maintenance and repair on a yearly basis to control FOD to guarantee safety for airfield operations.

“The apron and taxiways have been pieced together starting in the 1970s to 1980s,” said Captain Matthew Lehman, Vermont Air National Guard deputy base civil engineer. “The Air Force does routine evaluations and testing on its airfield pavements. Previous reports as in 2009 indicated that the apron and taxiways were nearing the end of their useful life, and needed to be scheduled for replacement within the next five to 10 years.

“Because of the time lapse from the initial construction of the apron and taxiways, the Department of Defense standards for width, lighting, construction and material has drastically changed. This project will be bringing the whole airfield up to today's standards.”

Lehman said now is the right time to carry out the much-needed work.

Lehman said the work taking place will mean a financial boost to the area.

“The general contractor on the project is Kubricky Construction of Wilton, N.Y.; however, they are using local subs of SD Ireland, Omega Electric, Whitcombs Quarry, JTC Testing and others. This project is having a great impact on the local economy.”

According to Eric Baker, Kubricky Construction superintendent, the day-to-day construction operations on the airport have not been affected by the construction, since the Guard's apron and taxiways are military-use only.

“There will be two separate instances where the tie-in work to Foxtrot and Delta taxiway construction will physically be adjacent to the Burlington International Airport runway. To complete this work and comply with FAA regulations, the runway threshold will need to be temporarily displaced, so that aircraft will not land adjacent to the construction and the construction can take place during the day. The airport has worked and coordinated these disturbances with tremendous cooperation to the project.”

Progress and timelines show the project on schedule, with the actual cost for the concrete placement driving the largest percentage of completion for the project. Right now, crews are working on excavation of earth for taxiway Echo, placing gravel courses beneath the proposed concrete pavement and constructing the Foxtrot blast walls. In addition, apron light pole bases are being excavated, workers are installing a 12-in. waterline and storm drainage structures are being finished. There's also ongoing electrical work, along with the electrical supply infrastructure installation.

Some demolition took place last fall, although the work performed did not involve buildings, but, instead, existing pavements, drainage and electrical items that had to be removed.

“The asphalt pavement was removed using cold milling machines,” said Baker. “The concrete pavement was first broken up by means of a guillotine breaker, and then excavated out using hydraulic excavators. The electrical wiring and fixtures were removed by electricians, and the subsurface infrastructure was removed during excavation tasks.”

The elements have not been a major factor, so far; however, the concrete paving will be very susceptible to inclement weather. The areas being constructed during the displaced thresholds will take careful consideration to ensure they are completed in a timely fashion.

Asphalt pavers are required for the placement of gravel beneath the pavements and concrete slipform pavers will be utilized to place the concrete pavement. Materials used during construction include GCAB gravel, drainage stone, concrete and hot mix asphalt.

The construction won't include the main runway, which military planes share with commercial carriers coming in and out of BTV, according to airport and guard officials.